Requiem for a "liberal news network": How MSNBC abandoned the left precisely when the left is on the rise

After its latest public spat with Melissa Harris-Perry, MSNBC is looking less and less like its former self 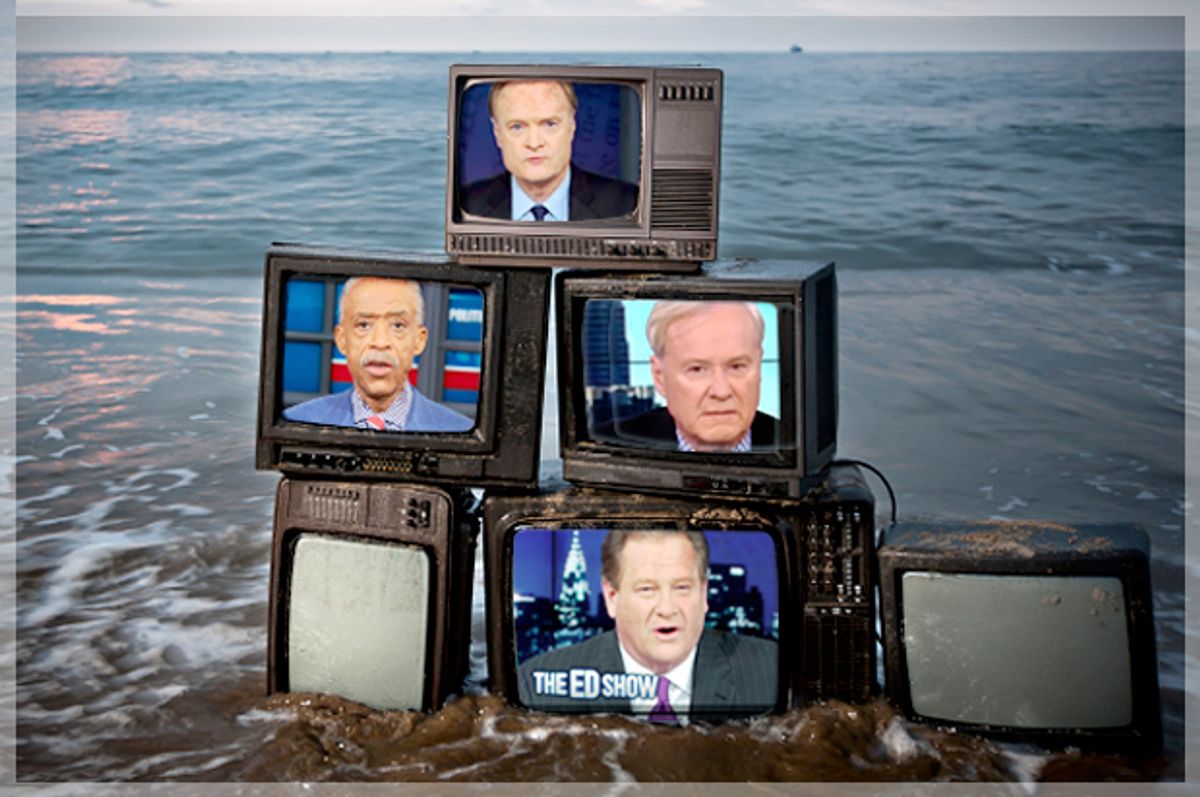 With the ugly departure of Melissa Harris-Perry from its ranks over the weekend, MSNBC continues its makeover from a place for televised progressive forums into a more hard-news channel, a la CNN. With that shift in priorities, it seems the network didn’t know what to make of Harris-Perry’s show. Befitting her main job as a full-time political science professor at Wake Forest University, Harris-Perry often tackled the complex subjects of race and gender -- and the places where they intersect with American society -- in a way that made it feel more like an undergraduate seminar than a regular TV show. It’s no coincidence that she and her fans referred to her audience as #nerdland.

The apparent disinterest of network executives in her work, along with their misuse of her during recent election coverage (which also pre-empted the show itself), led to Harris-Perry’s boycott of her own program, which she announced in a scathing email that excoriated her bosses, saying among other things that she would not allow herself to be “used as a tool for their purposes. I am not a token, mammy, or little brown bobble head.”

Harris-Perry herself backed off the tone of her initial email a bit, saying later that she didn’t think the sidelining that led to her frustrations and eventual departure had to do with the fact that she is black. Still, it’s impossible not to notice that this move reduced the number of African-Americans hosting their own shows on the network down to two. One of them, the Reverend Al Sharpton, is buried at 8 p.m. on Sunday mornings. A year ago, there were four African-Americans with their own slots -- also including Joy Reid and Tamron Hall, who still hosts her show at 11 a.m. on weekdays --  and the Rev. Al’s show aired five nights a week, Monday through Friday at 6 p.m. His move to Sunday mornings some months ago was rightly seen as a demotion.

In truth, the label of “liberal news network” has always struck me as a bit precocious when applied to MSNBC. This is the channel on which the conservative Joe Scarborough, a former Republican congressman who spent much of the late 1990s chasing Bill Clinton’s libido as it ambled along Pennsylvania Avenue, has hosted a three-hour morning show for the last nine years (and had hosted an evening show, "Scarborough Country," for four years before that). This is the network that let Pat Buchanan pollute its airwaves for a decade, only letting him go near the end of President Obama’s first term. This is the network that fired Phil Donahue over his outspoken opposition to the Iraq War.

Still, MSNBC was something of a respite for liberals during the George W. Bush administration, when Keith Olbermann spent an hour every night giving voice to the frustration and rage of the left. The network made a conscious effort to be the liberal alternative to Fox News. Poor ratings, however, would indicate that Baryon asymmetry extends to cable news networks. The constant and inchoate anger that keeps Fox aloft doesn’t flow as deeply through MSNBC’s natural constituency. At some point, technocratic liberalism sets aside its anger in favor of actually doing something.

Still, it’s sad to see the direction the network has chosen. It handed its 5 p.m. time slot to sister network NBC’s Chuck Todd for a daily version of "Meet the Press." It struck a deal with Bloomberg Television to air that network's "With All Due Respect," hosted by John Heilemann and longtime Scarborough cabana boy Mark Halperin, in its 6 p.m. hour. And the 7 p.m. slot still belongs to longtime shouter and consummate D.C. insider Chris Matthews and "Hardball."

With this programming block, MSNBC has moved away from giving a platform to viewpoints that are so rarely represented anywhere in the mainstream media. In giving more airtime to the likes of the execrable Todd and Halperin, D.C. insiders with the risk-taking edginess of dish soap, it is making a play to be yet another safe space for conventional wisdom and the both-sides-do-it rhetoric that has for so long refused to recognize the very real differences in the governing principles of our two major political parties. And it has done this at the exact moment that there does finally seem to be a reckoning for the rulers of both parties. Particularly for the Republicans, where Donald Trump has upended every lame manipulation the GOP establishment had long used to keep its constituents in line.

It has, in short, gone the generic corporate route. Not that it was ever some edgy, MTV-in-the-early-'80s hell-raiser, and not that profitability wasn’t always the overriding goal as it is with all corporate ventures. But it was something.

That all said, there was and is plenty of liberal programming in MSNBC’s primetime. Chris Hayes is still hanging in despite rumors of his show’s cancellation swirling around for the past year. Rachel Maddow’s ratings are up again after her show saw the lowest numbers of its seven-year run in 2014. But it’s a shame the “liberal news network” couldn’t find a way to keep its overall gestalt going.