Thanks for nothing, Elizabeth Warren: How the Democratic Party's rock star missed her chance, hurt the progressive agenda

The appetite was there for a truly progressive candidate to topple the Clinton machine. That candidate did not run 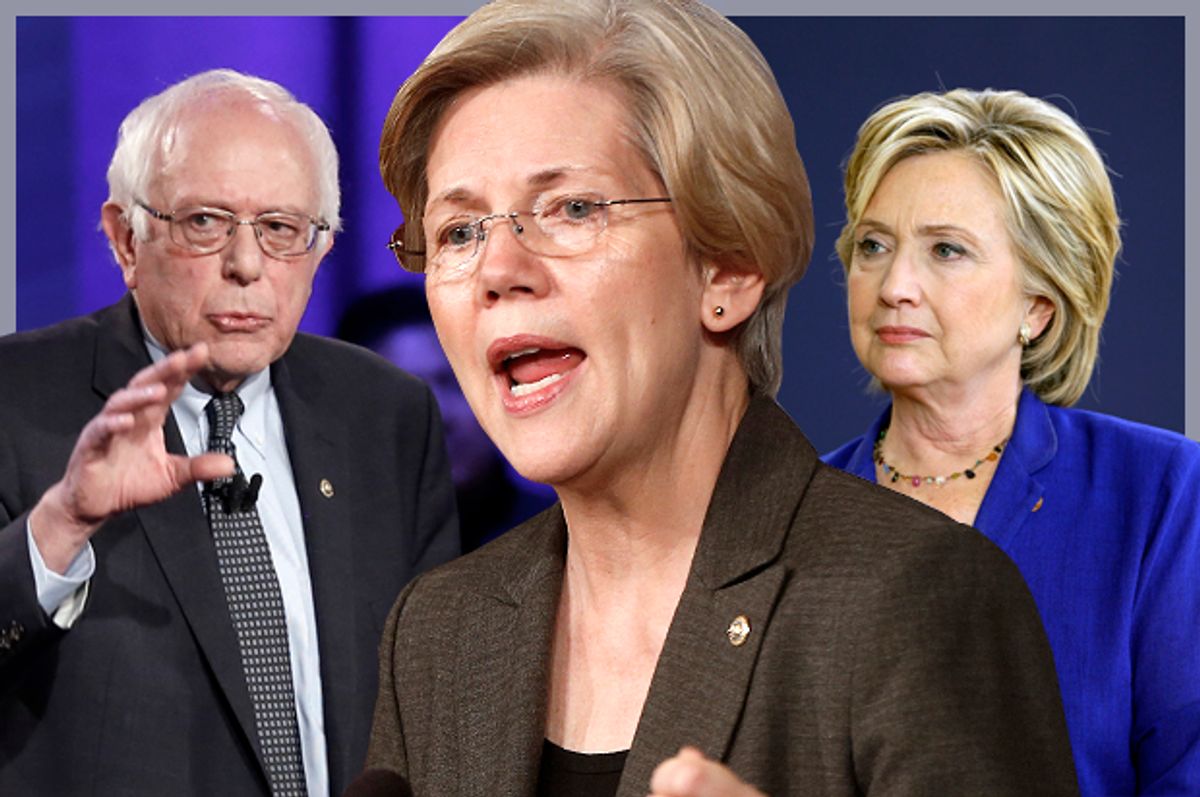 Elizabeth Warren could have been the biggest political story of 2016. Well, at least, the biggest story other than Donald Trump. Right now, she could have been coasting toward a Super Tuesday landslide and locking up the Democratic nomination. It doesn't take a wild imagination to picture it.

Instead, Warren is nowhere to be found, unless you're a Democratic donor on the receiving end of DNC email blasts signed by the Massachusetts senator. Raising money like this — or lending her name to these emails — might be her biggest contribution to the Democrats in the 2016 cycle. And unfortunately, that's why Super Tuesday is likely to seal the nomination for Hillary Clinton tonight.

My point is not to relitigate Clinton vs. Bernie Sanders for the millionth time. That argument closed in Nevada, and screamed to a halt in South Carolina. Hillary Clinton will make a Democratic candidate in the same mold as her husband or Al Gore or John Kerry. If elected president, she'll likely carry on the Obama legacy, appointing the right Supreme Court justices and blocking the worst excesses of the gerrymandered Republican Congress, while also remaining the same politician who served as the senator from Goldman Sachs and toured war zones with Lindsey Graham and John McCain. Even most of Clinton's harshest critics from the left would pinch their noses and vote for her in a contest against Donald Trump.

Bernie Sanders ran a near-perfect race to make it this close, but was never likely to overcome Clinton's superdelegate and electoral map advantages without more debates and a stronger, sharper performance in them.

What Sanders did, however, was demonstrate that with a different messenger — one willing to draw sharp contrasts, perhaps someone who was not a wild-haired socialist in his '70s from Vermont — the appetite was there in 2016 for a truly progressive candidate to capture the Democratic nomination. That candidate did not run. Progressives of a pessimistic bent might feel that they just missed a once in a generation opportunity to reorient the Democratic Party.

Had Warren run, you could make the case that she would have swept to the nomination. A February 2015 MoveOn poll found that 79 percent of Iowa and New Hampshire Democrats wanted Warren to enter the presidential race, and showed Warren polling higher than Clinton in both states. Keep in mind that this was well before Sanders' summer surge, when the Vermont senator had single-digit support in most polls.

And make no mistake, Sanders eventually did surge because his message resonated, certainly not because of his charisma or force of personality. As a candidate, Warren would have delivered a similarly resonant message, but as a party insider she could also have marshaled formidable support from sympathetic establishment Democrats, a feat that Sanders was unable to accomplish as a longtime independent. The vagaries of early polling aside, it now seems plain that 2016 was ripe for a progressive insurgent from within the Democratic Party to topple the Clinton machine. By 2020 or 2024, Warren's moment — and the progressives' moment — may have passed.

She didn't have to run. Yes, Warren delivered an impressive speech on the Senate floor late last year which some interpreted as praise for Sanders. Warren had two other moves to make: She could have given a full-throated endorsement to either Clinton or Sanders.

Had Warren endorsed Clinton when it mattered — say the day after Sanders' impressive win in New Hampshire — she could have named her price and potentially had real sway on the makeup and policies of a Clinton administration. Perhaps Warren's influence could have helped bridge Clinton's authenticity gap with progressive voters and produced plans for campaign finance and Wall Street reform that didn't sound like mere lip service.

As it stands now, Clinton stands no chance of tapping into the anti-corruption sentiment that fueled Sanders' rise. The young, disaffected voters that were moved by Sanders' promises to get money out of politics are more likely to stay home in November than turn out in great numbers to support Clinton, a candidate that in so many ways embodies the oligarchy Sanders' rhetoric targets.

Had Warren endorsed Sanders when it mattered — any time through yesterday — she might have provided the boost of momentum and urgency that propelled Sanders into Super Tuesday with a necessary boost after the deflating losses in South Carolina and Nevada.

Warren's voice could have changed the party, but she stayed silent. And now Democrats are left with more of the same.