The endless shaming of Erin Andrews: When a woman is sexually victimized online, the damage endures

8 years after a stalker invaded her life and blew apart her privacy, the invasiveness continues 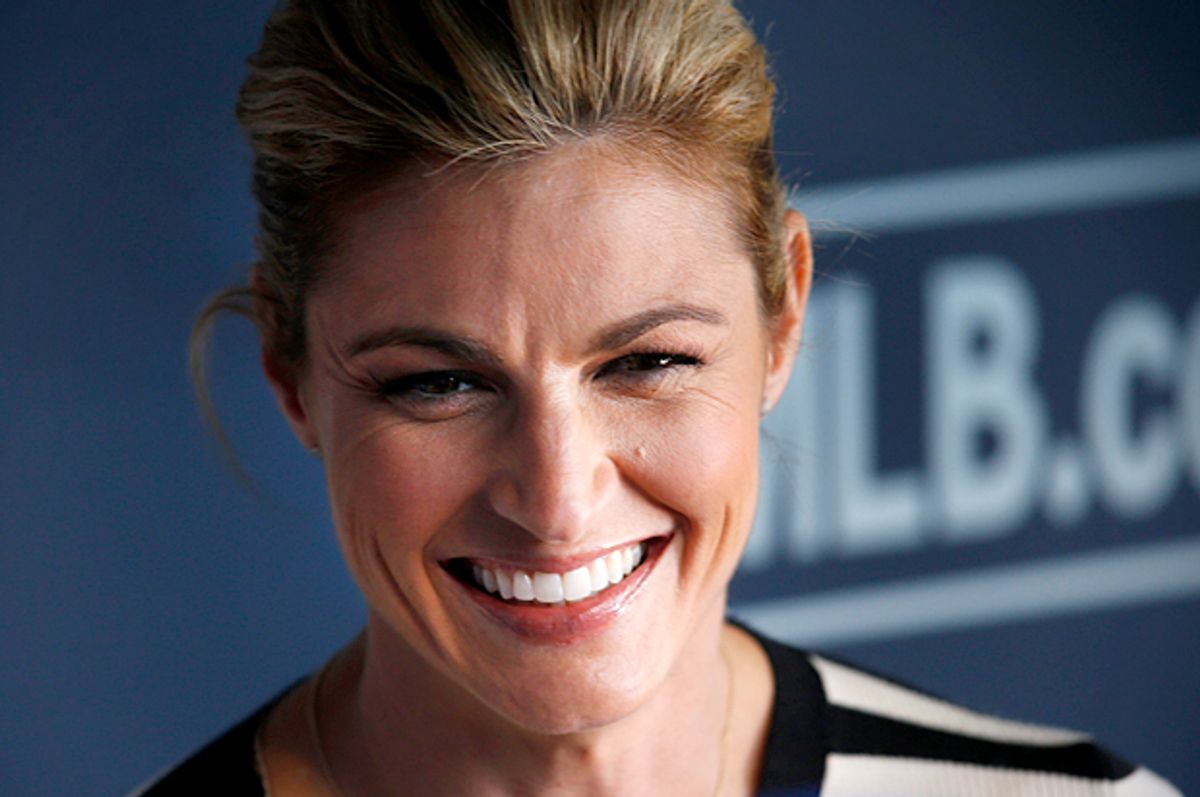 The consequences of a violation of a woman's privacy, for victimizing her sexually, are steep and enduring. For the woman. Just ask Erin Andrews.

It has been eight years now. Eight years since Fox reporter Erin Andrews was a rising ESPN sports star whose work took her to hotels around the country. Eight years since Michael David Barrett was traveling too, secretly filming her on his cellphone from peepholes he'd doctored. It's been seven years since Barrett, finding himself in what he now calls a "financial bind," sold a video of her, alone and nude in her room.

In 2010, Barrett pleaded guilty to obtaining hotel rooms next to Andrew in three cities and filming her in two of them. He was sentenced to 27 months in prison. At the time, Andrews said, "You violated me and you violated all women. You are a sexual predator, a sexual deviant and they should lock you up." And she added, "It's my body on the Internet. I'm being traumatized every single day for what he did.... This will never be over for me." And it's not.

On Monday, Andrews' $75 million civil trial against the Nashville Marriott at Vanderbilt University, as well as the hotel chain's West End Hotel Partners and Windsor Capital Group, as well as Michael David Barrett, commenced in Tennessee.  In a Nashville court last week, Penn State Professor Bernard Jansen estimated that 17 million people have subsequently watched the four and a half minute footage. "Right now," he said, "someone is watching that video."

In his chilling 2013 deposition, Barrett revealed the relative ease with which he was able to obtain such close proximity to Andrews, saying he'd asked to be connected to her via the hotel house phone, which then revealed her room number. Once he had the information, he rigged her room peephole, and then, as he admitted at one point, "I went back to the room, and unfortunately for both of us, I could hear that the shower was on in her room when I walked by… Then I pulled out the plug and waited for the opportunity." Yes. How unfortunate for him that he then chose to try to ruin a woman's life.

But the Andrews case is already making very clear — if you really seek to destroy a woman, it takes a village. What Barrett did was despicable. What the millions of viewers of her private moment as she imagined herself safe in the confines of her room — the viewers who are still clicking on that footage even now — are doing is despicable too. And how about her former employer, ESPN? On Monday, Andrews said that after the video went public in 2009, the network told her she wouldn't be allowed back to work until she agreed to do a damage control interview to, as the Washington Post reports, "dispel suspicions that she had staged the whole thing in order to gain greater publicity."  She told the courtroom, "That was the only way I was going to be allowed back."

Andrews eventually chose to tell her story to Oprah Winfrey, because Winfrey has been public in her own story of surviving sexual abuse. "I told her I didn’t want to do it," she said, "but this was the only way I was going to be put back on air…. Probably for three months, everybody thought it was a publicity stunt. That ripped me apart."

Even now, the nightmare continues. That video is out there, impossible to ever scrub away. And so is the cruelty it incites. In her testimony, Andrews tearfully said, "This happens every day of my life, either I get a tweet or somebody makes a comment in the paper or somebody sends me a still of the video to my Twitter or someone screams it at me in the stands and I'm right back to this. I feel so embarrassed and I am so ashamed." Let's just note that — eight years on, she feels embarrassed and ashamed for performing the reasonable and normal act of being undressed after a shower in her own hotel room.

It's a familiar refrain — one in which the woman who's suffered is made to feel the humiliation is hers. Five years ago, when reporter Lara Logan was sexually assaulted by a crowd of men in Egypt, LA Weekly called her the "Warzone It Girl," declaring that "In a rush of frenzied excitement, some Egyptian protestors apparently consummated their newfound independence by sexually assaulting the blonde reporter." Because it's the blonde reporter whose behavior is immediately suspect. The blonde reporter who's pulled a "stunt." And thanks to the trolls of social media and the durability of illegally obtained images, her violation isn't just a one time event. It's the gift that keeps on giving.