The industry has been gouging consumers for years. Bernie may be our only hope of reeling in its Martin Shkrelis 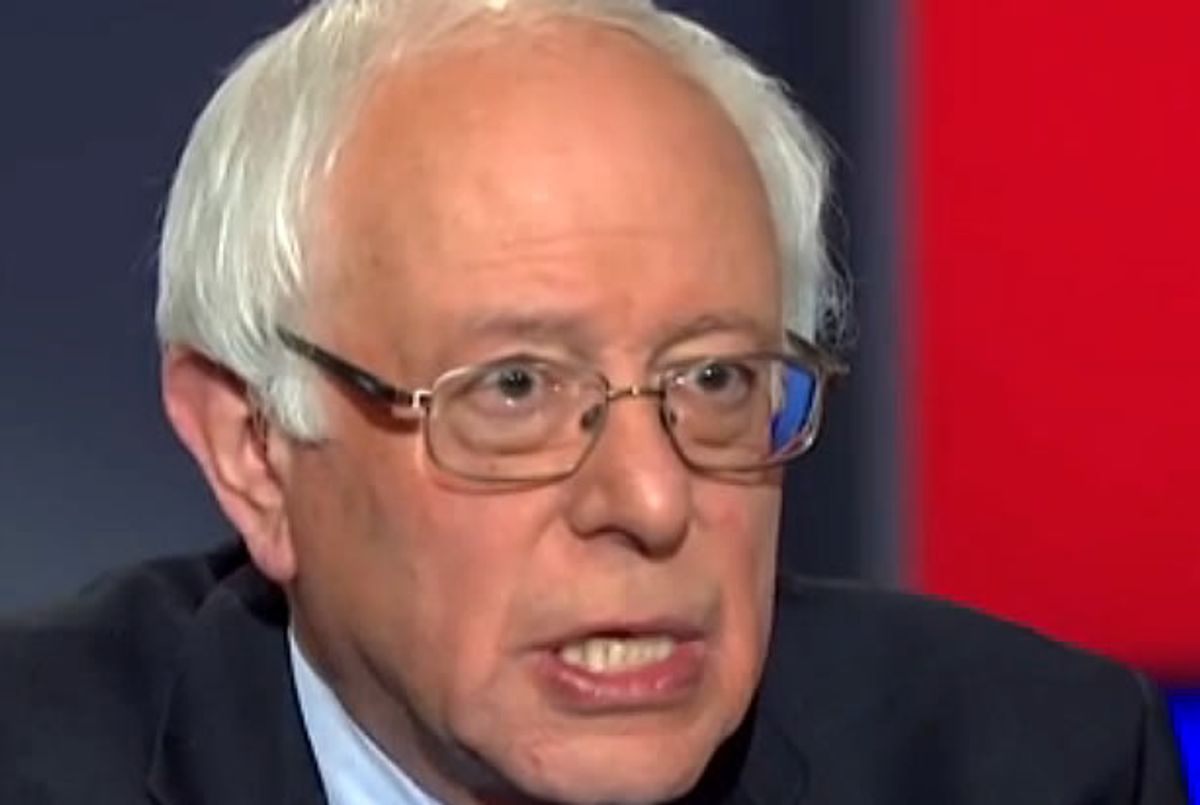 Today in the U.S., pharmaceutical drugs are outrageously overpriced. These unfair prices are under widespread scrutiny for the first time, thanks in part to Democratic presidential primary candidate Sen. Bernie Sanders (I-VT) who has been vocal on the issue for years.

Americans pay by far the highest prices in the world for their pharmaceutical medicines. As Sanders has pointed out in several speeches, as well as in the Democratic primary debates, last year almost one in five Americans ages 19 to 64—35 million people—opted not to fill their prescriptions because they did not have enough money to pay for them. ThinkProgress created the following chart to sum up the “High Cost of Prescription Drugs” in America:

The overpricing issue is so clear cut, it turns out, that even the GOP candidates—who maintain long-standing financial relationships with the pharmaceutical industry and the Big Pharma lobby—have included the issue in their primary platforms and speaking points. (Even so, none of the GOP presidential candidates think the government should set limits for drug company profits or that Medicare should negotiate with Big Pharma for fair drug prices.)

Meanwhile, requiring Medicare to “use its bargaining power to negotiate with the prescription drug companies for better prices, a practice that is currently banned by law,” is at the very top of Sanders’ detailed plan to lower prescription drug prices. He also plans to increase competition with Big Pharma by letting individuals, pharmacists and wholesalers in the U.S. import their prescriptions from Canada; restore discounts for low-income seniors; prohibit deals that keep generic drugs off the market; strengthen the penalties for prescription fraud; and require drug companies to be transparent when it comes to the pricing and cost of drugs, i.e. show us exactly what they’re spending the money on.

Sanders’ extensive plan to reel in pricing is just one of the reasons he is the most likely presidential candidate to stand up to the pharmaceutical industry and stop Americans from getting so brutally ripped off. Here are five more.

1. Hillary Clinton takes more donations from Big Pharma than any other candidate in either party.

Sanders has accepted zero dollars from the pharmaceutical industry. Perhaps in response to Sanders’ plan to reduce drug costs— which he announced right out of the gate— the former Secretary of State entered the primaries revealing her comparable plan to tackle the issue. Both candidates’ plans would encourage competition, use the bargaining power of Medicare and restore senior discounts, among other things. Both candidates also have strong histories tackling major health care inadequacies, and have spoken out against the inordinate price spikes for medications.

But we can’t ignore that glaring difference between the two candidates and their likelihood to actually stand up to the Big Pharma machine. Clinton has taken more donations from pharmaceutical companies than any candidate in either party. Her Big Pharma donations already totaled $164,315 in the first six months of her campaign, according to the figure compiled by the Center for Responsive Politics and reported by the Boston Globe in October. As Sen. Elizabeth Warren (D-MA), Sanders and others have pointed out, Clinton’s track record hasn’t exactly been impervious to the needs and wants of her big industry funders.

2. This is not a new fight for Sanders. Back when he was a congressman in 1999, Sanders led seniors across Vermont’s Canadian border to purchase their medications at cheaper Canadian rates. Sanders' position on drug prices has not wavered since then.

Responding to a 12.6 percent hike in the price of U.S. prescriptions in 2014 (according to the Centers for Medicare and Medicaid Services), Sen. Sanders introduced a bill, the Prescription Drug Affordability Act of 2015, in September to strengthen the federal government’s ability to rein in medication prices. It was assigned to a congressional committee in September 2015.

3. Sanders voted against Obama’s nominee for new head of the FDA due to his Big Pharma ties.

When President Obama announced his decision to nominate Michael Califf as the new head of the Food and Drug Administration in January, Sanders formally blocked the choice, citing Califf’s close ties to Big Pharma.

Sanders said in an official statement, “Dr. Califf’s extensive ties to the pharmaceutical industry give me no reason to believe that he would make the FDA work for ordinary Americans, rather than just the CEOs of pharmaceutical companies."

4. Sanders has named the overprescription of opioids a cause of the nation’s heroin epidemic.

According to the most recent data from the Centers for Disease Control and Prevention, heroin use in the U.S. increased by 63% between 2002 and 2013 across age groups and income brackets. The same report shows that heroin overdose-related deaths just about quadrupled between 2002 and 2013. The report’s authors noted that heroin use is part of a larger national substance abuse problem and point to the widespread over-prescription of opioids as contributing to increased heroin addiction rates.

"Heroin use is increasing at an alarming rate in many parts of society, driven by both the prescription opioid epidemic and cheaper, more available heroin," CDC director Tom Frieden said in a news release last year.

Sanders has raised the issue on multiple occasions, calling out the drug companies that produce opioids for their role in creating the widespread addiction to heroin.

In the Democratic primary debate on December 19, Sanders said prescribers and drug companies, “have to start getting their act together,” and in the January 17 debate he said, "There is a responsibility on the part of the pharmaceutical industry and the drug companies who are producing all of these drugs and not looking at the consequence of it."

Sanders has been an open supporter of medical marijuana use for years. He co-sponsored the States’ Rights to Medical Marijuana Act in 2001, which if passed would have moved cannabis from being listed as a Schedule I substance (the strictest listing possible, which makes it a felony drug) to a Schedule II substance. Schedule II would mean it was recognized as having an accepted potential medical use.

Already, many patients are replacing their pharmaceutical drugs with marijuana in states where it is legal. Since in most of those states, medical marijuana patients can legally grow their own plants, the cost of medication can be automatically lowered for some individuals.

Medical marijuana is also likely to reduce the national epidemic of overdose deaths—and thus inadvertently reduce healthcare costs overall. According to an abstract published by JAMA Internal Medicine, the use of medical marijuana in states that have legalized the drug for prescription purposes has led to just about 25% lower opioid-overdose mortality rates.

In the 13 states with medical cannabis laws in place between 1999 and 2010, there was "a 24.8% lower mean annual opioid overdose mortality rate compared with states without cannabis laws."

It’s not hard to reason why taking away almost a quarter of overdose deaths might translate into significant savings for U.S. healthcare at large. So while it’s conjecture, it’s possible that legalizing pot—either medically or for across the board adult use—has the potential to significantly lower medical costs for many Americans.