The victim and his brother believe they were targeted for speaking Arabic. An Illinois police officer was involved 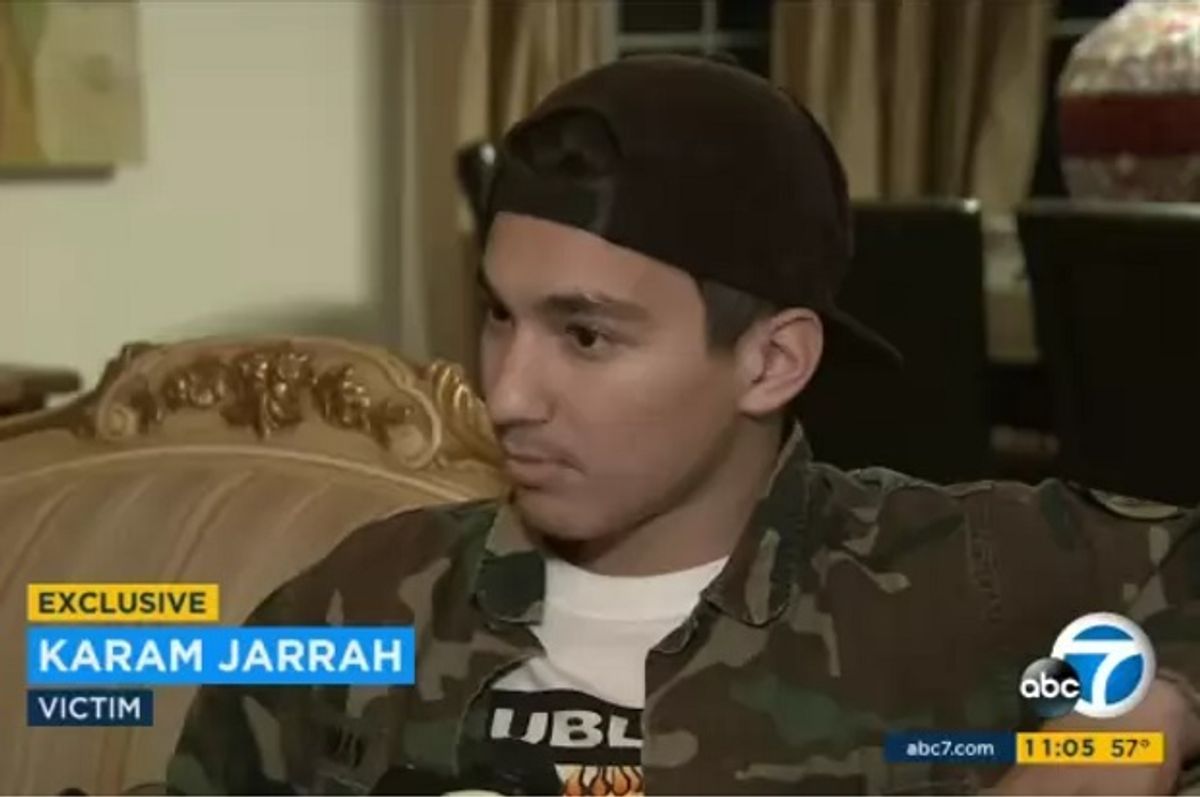 17-year-old Karam Jarrah, who was stabbed in an attack, he believes for speaking Arabic (ABC7/Screenshot)
--

Authorities are investigating the brutal attack on an Arab teenager and his brother-in-law in Huntington Beach, California on Sunday.

An Illinois cop was among the three people arrested in connection with the attack. Officer Arthur Roman, 28, along with his brother, Martin, and his brother's wife, Jessica, were charged with battery and assault with a deadly weapon, reports Chicago's WLS.

The attack took place in the early evening, outside a 24-hour fitness center.

Jarrah and his brother-in-law, Asem Dghem, were on their way home when they walked by the three suspects, who were sitting in their car. Jarrah says one of them shouted a racist phrase at him.

"He was like, 'What's up 'obamabam?' I don't even know what that means," Jarrah told Huntington Beach's KABC.

Jarah was hospitalized and is in stable condition.

The alleged attackers drove away but were caught and arrested.

Reflecting on the fact that his brother-in-law was allegedly attacked by a police officer and his family, Dghem told local media, "They have to actually protect us, not stab us."

Authorities have not said whether they consider the attack to be a hate crime, but they are investigating.

The boys suspect that it was. Dghem noted, "We have faced this type of situation before."

"Was it like a racial issue?" Jarrah asked. "Is it because we were speaking Arabic, or it can be like just the way we look?"

Incidents of anti-Arab and anti-Muslim hate crimes have skyrocketed in the U.S. in recent months, since leading GOP presidential candidate Donald Trump called for a ban on Muslims entering the U.S., and since the November Paris attacks and the December San Bernardino shooting.

Not all Arabs are Muslim, and the vast majority of Muslims in the world are not Arab, but Arabs are often attacked simply because racists believe they are Muslim.

Hate crimes against Muslim Americans and mosques tripled in December, according to California State University, San Bernardino's Center for the Study of Hate and Extremism. There have been extreme attacks, including arsons, shootings, assaults, vandalism, and death threats.

Anti-Arab and anti-Muslim violence is at the highest level in the U.S. since after the 9/11 attacks.