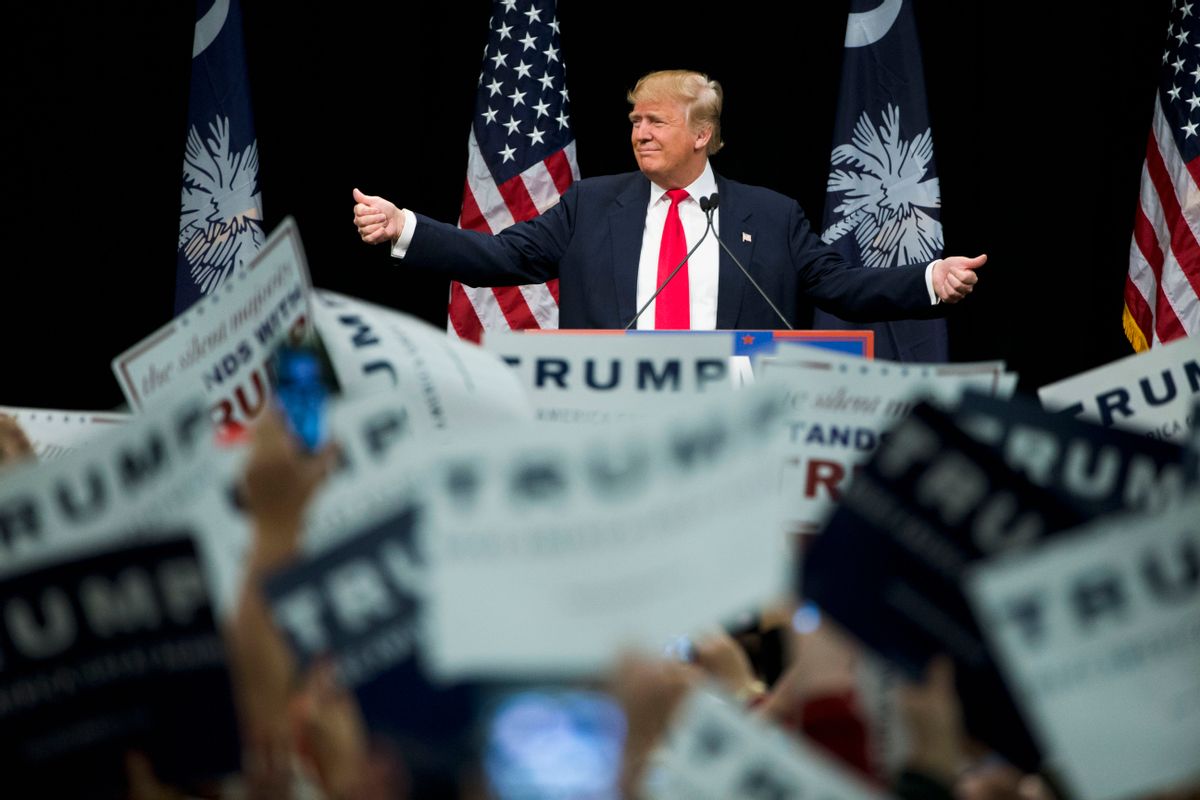 FILE - In this Feb. 19, 2016, file photo, Republican presidential candidate Donald Trump gestures during a campaign stop in Myrtle Beach, S.C. Well before Donald Trump was leading the race for the 2016 Republican presidential nomination, there was Jesse "The Body" Ventura, the former professional wrestler, radio talk show host and suburban mayor who, in his own election-night words, shocked the world with his improbable 1998 gubernatorial victory in Minnesota. (AP Photo/) (AP/Matt Rourke, File)
--

As Donald Trump rolls around in the heap of delegates he won on Tuesday, let’s all break out the world’s tiniest violins for the conservative political and media figures who opposed him, and whose opposition resulted in their suddenly noticing that their movement attracts vile racists and anti-Semites. Welcome to the party, folks!

Even while being disgusted by the abuse targeting conservative critics described in this Daily Beast article that dropped on Tuesday, one has to also feel just the tiniest bit of schadenfreude. Or maybe not even a tiny bit. Maybe you’re swimming in a vast ocean of satisfaction as the chickens that liberals have been talking about for years have finally come home to roost.

The piece in question examines the role of the right-wing Breitbart news websites in fluffing Donald Trump’s candidacy and defending the tangerine-shaded mogul from other conservatives who have questioned his right-wing credentials. In doing so, Breitbart has unleashed (wittingly or unwittingly) mobs of anonymous, angry wingnuts spewing such vitriolic threats that one writer mentioned in the piece, Bethany Mandel of the Federalist, recently bought her first gun.

Savor that irony for a minute. A card-carrying member of a political movement that often espouses unfettered gun ownership for protection from the scary hordes of (implicitly dark-skinned) haters and knockout gamers and members of ISIS who might invade Miami has had to buy a gun to protect herself and her family from fellow conservatives. Other conservatives profiled by the Daily Beast article mention death threats and promises to gang-rape family members.

Here’s a thought for conservatives: Maybe next black president, you won’t spend eight years telling the mouth breathers who make up your audience that his agenda revolves around destroying America by handing out food and healthcare to people with darker skin. Of course you’ll all deny you've done this, but liberals have spent years watching the right pump up every vaguely racialized trope it could to dog-whistle at its adherents.

Which is how you find yourselves needing guns to protect from people who are now angry to find out you are not their ideological allies.

But back to Breitbart. Conservatives seem to have only noticed in the last year or two that the website is a sewer filled with racist neo-Nazis. If you have followed the site’s falling out of favor with other right-wing media organs, you might have seen conservatives lamenting the ruination of its “good name,” or moaning about how far it has fallen since the death of Andrew Breitbart four years ago.

But Breitbart has always been a purveyor of the worst kind of reactionary, racist, dog-whistle politics, since long before Trump declared his candidacy. No, scratch that. The site didn’t send out dog-whistles. It blasted full-on air-raid sirens. Anyone with half a brain noticed this years ago, which I guess explains how the conservatives quoted by the Daily Beast missed it.

Two easy examples from the early years of the Obama administration tell you all you need to know. The first was the scandal over the ACORN videos made by James O’Keefe and Hannah Giles. As the videos allegedly showed ACORN employees giving a pimp advice on how to hide the income his prostitutes were bringing in, O’Keefe spiced them up by filming himself dressed like a pimp right out of a Blaxploitation flick from the 1970s. He even appeared on Fox News to promote the videos while wearing the costume. Since ACORN was devoted to helping low-income, often African-American people, the dog-whistle was hard to miss.

The videos were later found to be heavily edited, but by that time it was too late to save ACORN from being shut down. The footage was first acquired, shown and heavily promoted by Andrew Breitbart, who let the story that he was a sort of mentor to O’Keefe float around. They were the first exclusive of Breitbart’s Big Government website, and helped launch the organization into the stratosphere, making it a major player on the conservative side.

Breitbart followed this up with the infamous Shirley Sherrod incident, in which he also presented video to “prove” that an African-American employee of the Department of Agriculture was actually a reverse racist who hated white people. This smearing cost Sherrod her job and her reputation, even though it quickly became clear the video, like those of ACORN, had been misleadingly edited, leaving out important context that negated the central thesis that the mild-mannered Sherrod was some sort of Foxy Brown cosplayer. She later sued Andrew Breitbart for defamation, eventually reaching a settlement with his widow.

Were Mandel, John Podhoretz or any of the other conservatives cited in the Daily Beast worried in 2010 that these kinds of bullshit stunts were creating a danger to the party by fueling the racial resentments of white conservatives, playing to their innate fears that the homogenous America they knew was being replaced by a multicultural, multiethnic society where previously marginalized people gained power and agency? Or were they perfectly happy to have Andrew Breitbart and his site out there feeding this monster because it meant more elected Republicans and more engaged conservatives reading not just Breitbart, but their own work as well?

I know which of those possibilities I’m betting on.

The ACORN and Shirley Sherrod events were only two of the highly racialized events the right wing has played up for years. Who can forget the New Black Panthers, or the constant demonization of Eric Holder and his Justice Department as being some sort of racial justice squad primed to get revenge on white people for centuries of oppression? Who can forget the smearing of Debo Adegbile or all the new voter ID laws that disproportionately prevent minorities from casting ballots?

Breitbart made its name by hyping and promoting these incendiary racial politics. It played up every single one of these events, and more, and heard nothing from conservatives beyond Attaboy! Now those who ginned up the voters by pushing this kind of garbage are finding out that the wave they have been riding is too big to handle, that it threatens to drown the GOP, and all they can do is blame other people when it was they who ignored the warnings of rough surf.