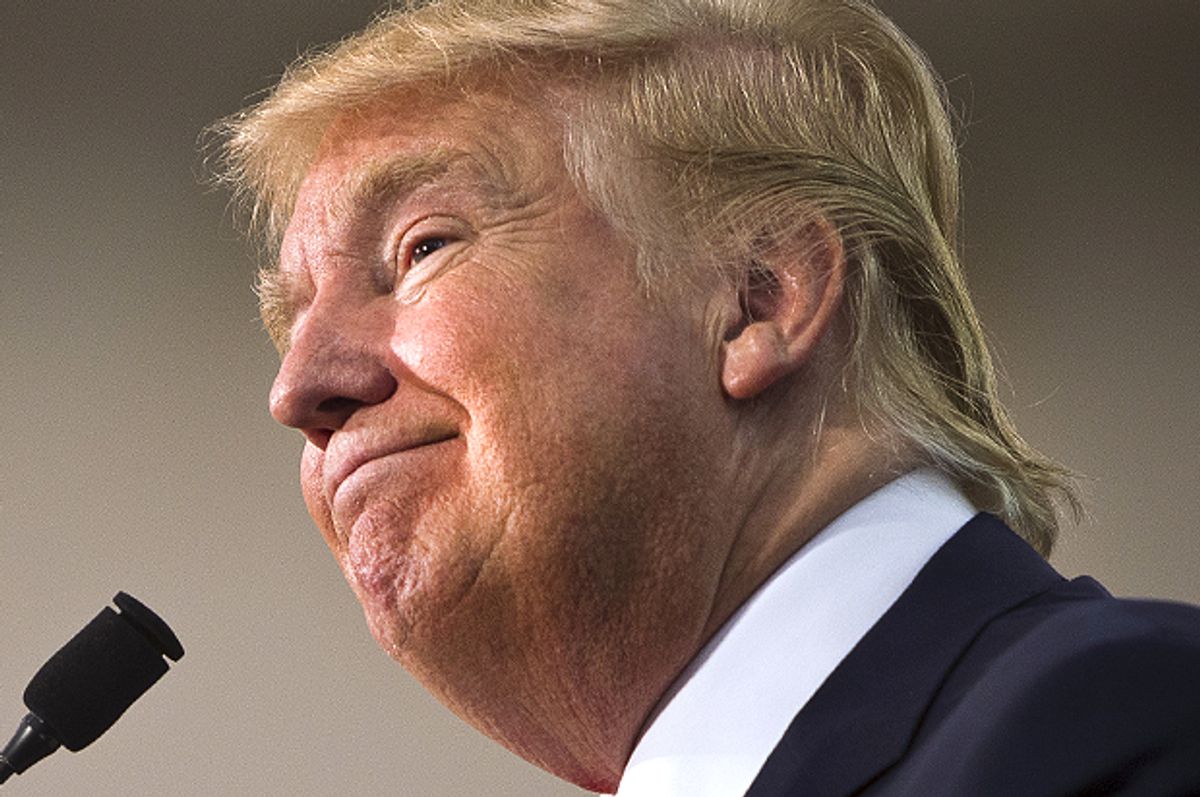 UPDATE: According to a statement from Donald Trump spokesperson, Hope Hicks, although James Edwards was a fully credentialed member of the press at Trump's Memphis rally last Saturday, he did not interview Donald Trump Jr. as previously reported. Here is the Trump campaign's full statement:

The campaign provided media credentials to everyone that requested access to the event on Saturday in Memphis. There were close to 200 reporters in attendance and we do not personally vet each individual. The campaign had no knowledge of his personal views and strongly condemns them. Donald Trump Jr. was not in attendance and although he served as a surrogate for his father on several radio programs over the past week, to his knowledge and that of the campaign, did not participate in an interview with this individual.

Donald Trump may have blamed a faulty earpiece for his failure to plainly disavow former Klu Klux Klan leader David Duke's semi-endorsement over the weekend, but new reporting indicates that Trump's hesitation was hardly due to technical difficulties and was likely part of a calculated flirtation with white nationalists.

Trump’s oldest son, Donald Jr., gave a 20-minute interview last weekend, while his father was failing to disavow the KKK, to a notorious "pro-white" radio host who will air the show this Saturday, according to a blog post released Tuesday and flagged by Media Matters.

Edwards has hosted leaders of the KKK, Holocaust deniers, neo-Nazis and now a member of Donald Trump's own clan.

Trump, of course, has come under recent fire for embracing the uglier parts of his base of support. Last week, David Duke told his followers that a vote for anyone other than Trump is a vote against "heritage." After shrugging off the former KKK head's endorsement in a press conference Friday, Trump played coy in an interview with CNN's Jake Tapper on Sunday, refusing to flatly condemn any support from the hate group.

"I attended a Donald Trump rally in Memphis on Saturday night as a fully credentialed member of the media and enjoyed the unique experience of being able to air a live broadcast of The Political Cesspool Radio Program from inside the press pen while the event was in full swing," Edwards boasted in a blog post:

I’ve been saying for years on the radio that the majority of Americans fundamentally agree with us on the issues and that the neocons were generals of a phantom army. I am being proven right. Our people just needed a viable candidate and they’ve identified Trump as that man. There is no doubt that Trump’s populism and nationalism is galvanizing our nation and may change the course of American history for the better right before our very eyes.

While it may be difficult for the Trump campaign to screen every member of the press, Edwards is an avowed white nationalist whose own mission statement, as posted on his website, reads: “We wish to revive the White birthrate above replacement level fertility and beyond to grow the percentage of Whites in the world relative to other races.”

Given the Trump campaign's abrasive (at best) relationship with press (not named Joe Scarborough) on the campaign trail -- just this week, a photojournalist was manhandled by security -- it's curious that a man infamous for claiming that “interracial sex is white genocide" was granted more rights and access than actual journalists. The Trump campaign has not responded to requests for comments on either Edwards' press credentials or his interview with Trump Jr. And even if Trump was eventually pressured into disavowing the support of Edwards and the "pro-white" Trump supporters of his ilk, Edwards argues that his mission is still accomplished:

I firmly believe that everything for which I stand is both natural and healthy, but it wouldn’t bother me if Donald Trump himself denounced me and all of my friends. He can denounce me until the cows come home so long as he follows through on his pledge to build a wall and ensures that the aliens self deport. I am supporting him because immigration is the single biggest problem that our nation needs to solve. Demographics is destiny.