F**k it, I'm rooting for Donald Trump: It's what the GOP deserves, and what we all deserve if we don't mobilize

I don't want to live in Angry, Stupid America. But a Trump nomination would force us all to get serious and fight 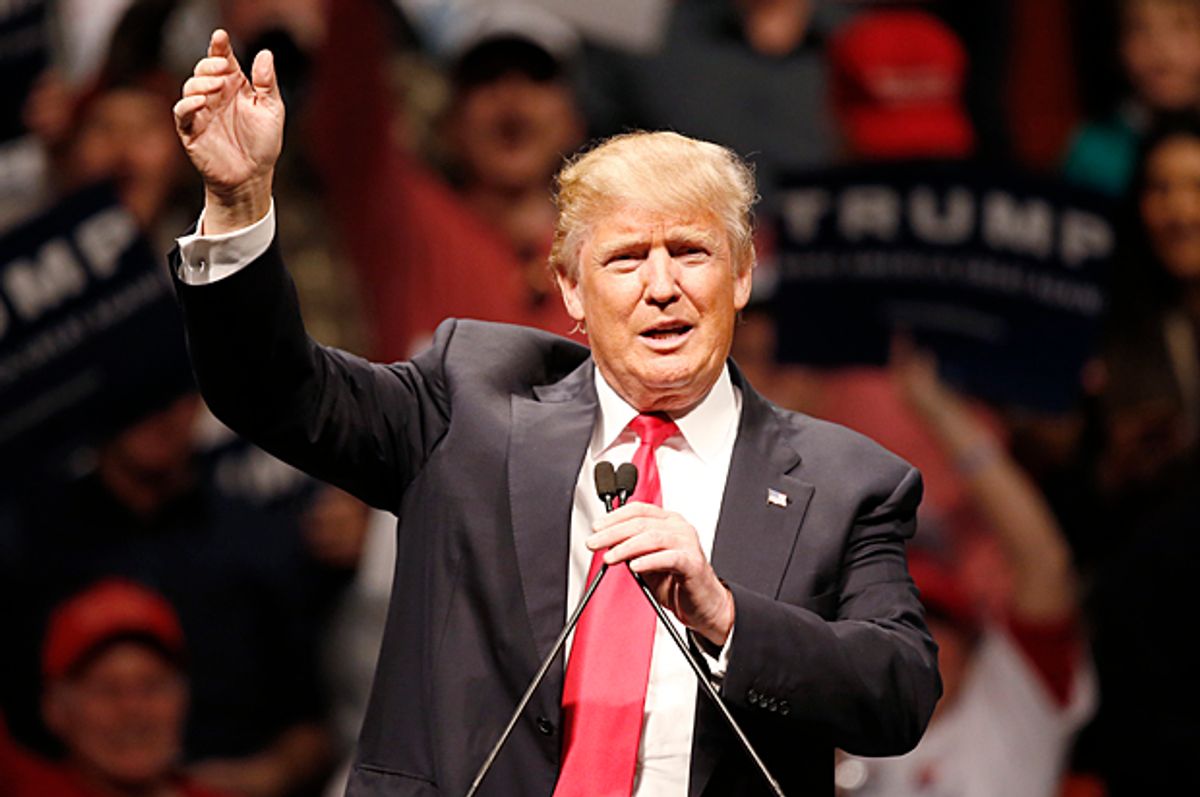 I may wind up divorced for writing the rest of this sentence, but here goes: I am officially endorsing Donald Trump for the GOP presidential nomination.

Having just risked the loss of my marriage, along with most of my friends, let me clarify that I do not wish Donald Trump to become the next president of the United States. I find him every bit as disturbing as the rest of you who do not wish to live in Angry, Stupid America.

But I’ve also grown weary of the hysterical siren calls against a Trump nomination. I may live to regret these words but as I sit here today watching the bloated spectacle of another primary season, I want Trump to win.

Here are seven reasons why:

1. A Trump Nomination Is Precisely What the GOP Deserves

For half a century, the GOP’s corporate minders have sought to inflame their base with racist and nativist rhetoric.

Trump doesn’t code his racism. (Mexicans are rapists, Muslims should be registered, and so on.) I’d rather face a candidate who uses wolf whistles than dog whistles. It’s a more honest arrangement.

Fox News and the entire Conservative Media Machine have spent a generation breeding dittoheads: frightened, low-information voters driven by grievance and desperate for an authoritarian voice to follow.

In the end, these folks don’t care about “conservative principles” such as slashing government programs and taxes and regulation. That’s the agenda of the donor class and its army of lobbyists. The base wants a loudmouth who can reduce the moral complexity of America to a narrative they understand, the one about how they’re being ripped off and left behind.

Ladies and gentlemen of the Grand Old Party: Trump.

2. Trump Will Not Run Well in a General Election

Trump is adored by his core supporters but widely reviled by most moderates and Democrats. Where Trump Nation sees a brash, no-nonsense leader, the rest of America sees a vulgar narcissist, morally hollow and possibly unhinged.

It is one thing to judge Trump as an entertainer, and quite another to consider handing him the keys to the Oval Office. As the election draws closer, voters (and presumably the press) will begin to ask for more than extemporaneous soliloquys about trade deficits and poll numbers.

He will have to explain, more precisely, why a career in real estate, serial bankruptcy and reality TV qualifies him to be president of the United States, and how he plans to govern.

Consider our most recent Object Lesson: Sarah Palin. She went from rising star to laughingstock in the space of a few weeks. Trump may fare better in media interviews. But as the race becomes more focused on specifics, his bluster will run smack into that giant boring loser known as reality.

There’s also a considerable chance that the GOP’s true centers of power—the corporate donors who underwrite stooges like Marco Rubio—will refuse to throw their filthy lucre at Trump. That may be true of loyal party strategists and politicians and pundits, too.

3. Trump Will Mobilize the Left

The very fact that so many people are freaked out by Trump’s ascent is a good thing. It means that Democrats and moderates and non-white supremacist adult humans with a functioning frontal cortex will be more likely to participate in the electoral process—by voting, volunteering, donating.

And that matters, given that right now Republican turnout for the primaries has been record-setting.

Because that’s the thing about democracy: We get the leaders that we, as a populace, elect. If handing the nuclear codes to Donald Trump terrifies you, do something about it.

I really don’t want to dwell here, because it’s just too depressing. But how many of you Trump alarmists are ready to defend Ted Cruz or Marco Rubio as somehow more reasonable or mature than Trump? Both men are ambitious nihilists bought and paid for by corporate sugar daddies. Neither one can point to a single original policy idea. They’re just peddling the same tired brand of obstruction that has come to define the “Republican agenda.” Cruz is basically Sen. Joe McCarthy with a Bible and a better comb-over. Rubio is like some dry-mouthed hate-bot dreamed up by Ayn Rand during her lost weekend in the Caribbean.

5. Trump Has the Courage to Take Some Sensible Positions

Which brings me to this, and this and this.

Look, you may not like to hear this, but Trump is the only candidate on the Republican side who has decried our corrupt campaign finance system and the Iraq War—he loudly declared that it was predicated on lies, in fact—and voiced his support for Planned Parenthood.

To any other candidate, a Rubio or a Cruz, these positions would be enough to have him expelled from the next John Birch smoker. But part of Trump’s undeniable appeal is that he refuses to be given his marching orders by the RNC or Fox News or any plutocratic kingmaker.

This doesn’t mean that a Trump presidency wouldn’t be calamitous. But it does suggest that—like many businessmen—he’s ultimately a pragmatist, not an ideologue. He’s far more likely to cut deals with congressional Democrats than any other GOP candidate. He wants, most of all, to be seen as a winner. If that means negotiating, he’ll negotiate.

6. Trump Would Force the Media to Put Up or Shut Up

One of the most fascinating dynamics of the campaign has been to watch reporters knuckle under to Trump’s hectoring. He has a bully’s knack for shouting down anyone who challenges him. And the corporate media has been delighted to play along thus far, because he guarantees gonzo ratings.

The question is, if he becomes the actual nominee, will any of the top-tier television reporters and pundits start to hold him to the same standards as the other candidates? Will they demand his tax returns? Will they confront him about his basic knowledge of world affairs? Or his bigoted outbursts? Or his endless flip-flops?  Will they, in other words, stop treating him as a lucrative sideshow attraction?

I’m so curious to find out.

7. Trump’s Nomination Would Set the Stage for a Dream Match-up

I happen to agree with the polls that suggest Bernie Sanders would be the candidate best positioned to defeat Trump. Simply put, most Americans would rather vote for a guy who wants to hire you than one who wants to fire you. Given a stark choice, they’ll choose a champion of the working class over a burnt-orange billionaire.

But even if Sanders isn’t the nominee, the same electoral dynamics obtain: Democrats do better when voter turnout is high. And there’s nobody on the GOP side more galvanizing than Trump.

Again, the fact that liberals and some moderates are freaking out simply means they’re more likely to be politically active in the coming months. It may be fun to mock Trump’s supporters for their proud ignorance and childish loyalty. But their votes count in a democracy just as much as yours.

If you don’t like what they or their hero say about the state of America in 2016, then do something about it.