“Stop the sham!”: Pro- and anti-choicers clash at rally while Supreme Court weighs fate of legal abortion in Texas

Pro-choicers vastly outnumbered opposition at a SCOTUS rally, but there were still plenty of culture war fireworks 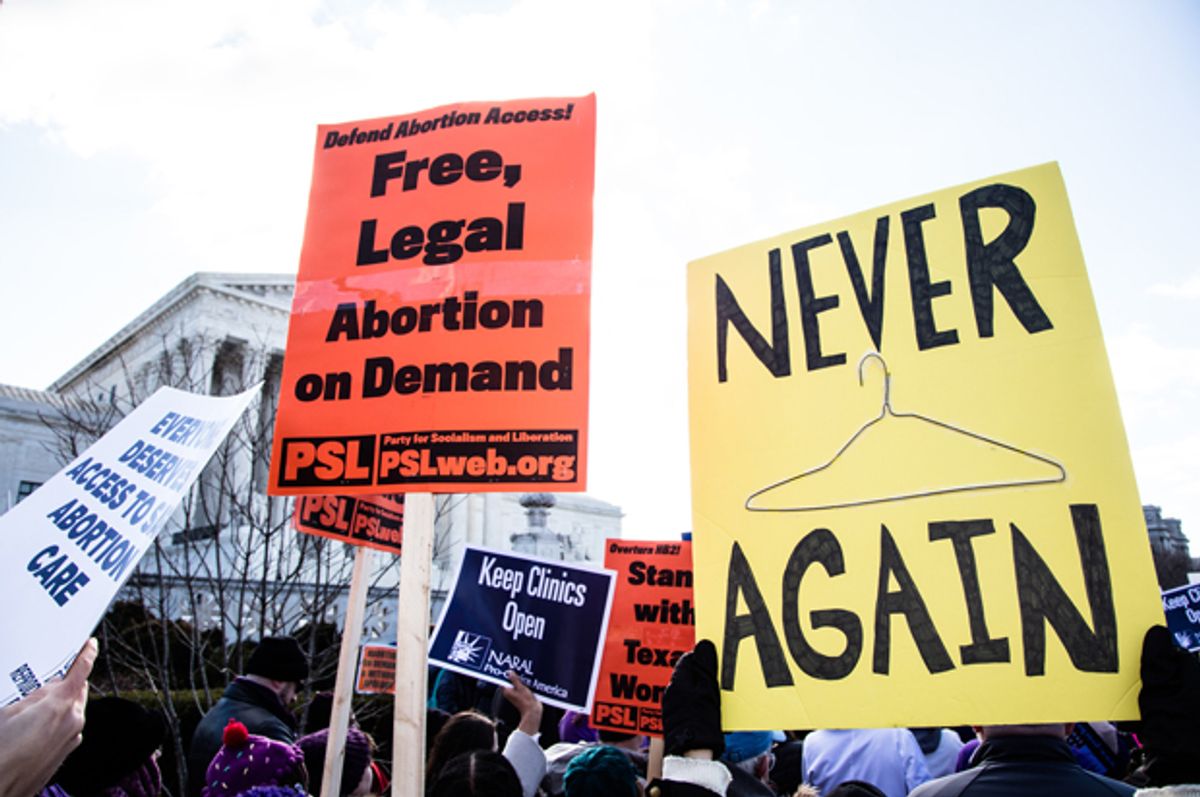 Wednesday, the Supreme Court heard arguments for Whole Women’s Health vs. Hellerstedt, a Texas case to determine whether states can use the pretense of “women’s health” to shut down legal abortion in the state. Outside, under flags flying at half-mast for the recently deceased Justice Antonin Scalia, supporters and opponents of legal abortion braved the cold to rally on the courthouse steps.

Though really, it was mostly supporters of reproductive rights, who turned out a crowd significantly bigger than the anti-choicers were able to turn out — and had a speaker system that was much louder than what the anti-choice activists brought to bear. This clearly frustrated anti-choice speakers, who got increasingly shrill in an attempt to be heard over the pro-choice crowd chanting and “Pro-choice!”, but no amount of shouting into the microphone helped anti-choicers overcome the noise of the pro-choice crowd.

At one point, a small clutch of young men, clad in Christian T-shirts and holding National Right To Life signs, gave into the frustration. Annoyed by the pro-choice chants (some of which were in Spanish), they started chanting, “Build the wall! Build the wall!” before succumbing into a heap of self-congratulatory giggles. A woman behind them laughed and exclaimed, “That’s fantastic.”

At another point, one of their group sneered, “My body, my choice, yeah, my choice to be stupid.”

Texas legislators argue that the law in question — which requires abortion clinics to build full surgical suites that doctors have no use for and to have hospital admitting privileges even though abortion patients almost never need hospital care — are necessary to protect women’s health.

Stephanie Toti, the lawyer from the Center for Reproductive Rights that argued the case in front of the Supreme Court, characterized the law as “a sham designed to limit women’s abortion access.”

The experts agree with Toti and not with the Texas legislators who wrote this law. Both the American Medical Association and the American Congress of Obstetricians and Gynecologists have denounced the Texas law as medically unnecessary and argue that it will result in worse health outcomes, especially since many women will attempt to self-induce if they can’t get to a real doctor.

As Samantha Bee recently demonstrated on her TV show, Texas state representative Dan Flynn, who co-wrote the bill, doesn’t seem to know how abortions are even performed, claiming that it involves "cutting into" a woman's body. (Not to gross out the bloody fetus picture people, but women come pre-equipped with a hole that allows a doctor to remove a pregnancy without surgery, and often even just by giving her a pill to swallow.) This from a man whose bill rests on the assumption that he knows better than the American Medical Association what is safe for women.

But even though the claim that abortion is dangerous is tissue paper thin, some of the anti-choice activists I spoke to at the rally tried valiantly to hold the line, arguing they wish to “protect” women from abortion. Like Flynn, two I spoke with insisted on talking about it in terms of knives and cutting, and suggesting it's typical for women's bodies to be badly damaged by it. (In reality, childbirth, and even penicillin shots, are far more dangerous.)

It would be fun to make a joke about sex ed, but since they held the line even after I pointed out that you can end a pregnancy with a pill, I have to conclude this talk of cutting is offered in bad faith, and is an attempt to gross people out, rather than out of a sincere misunderstanding of what’s involved.

One woman, carrying a sign reading “I Am A Pro-Life Feminist," tried to convince me that opposing legal abortion is the feminist position. Abortion is “a tool of the patriarchy," she told me, because it allows men to have sex without “consequences."

When I asked if women might also enjoy sex, she conceded that it happens, but then pivoted, arguing, “You don’t get pregnant just getting on the bus.” She returned to her insistence that sex should have “consequences," implying that disagreement constituted irresponsibility.

Despite the very real threat to reproductive rights going on inside the walls of the Supreme Court, most pro-choicers on hand were in a relatively sunny mood, buoyed by the much greater showing their side had at the rally.

A group of pro-choicers held out a quilt so long that a row of people had to hold it up. Artist Chi Nguyen stood at the center and told me that the quilt was meant to represent the 5.4 million women of reproductive age in Texas whose access to reproductive health care was threatened by the regulations. Activist Michelle Kinsey Bruns, who tweets under the name “Clinic Escort," spoke early at the rally, telling the story of an abortion she got as a young woman. She's grateful that she was able to preserve her future with a safe, humane abortion, and because of it, she went on to be a volunteer at abortion clinics, helping patients get past the religious conservatives who show up to harangue them on their way to the clinic door.

“I came to tell my abortion story,” she told me after she left the stage, “because millions go untold. And because this isn’t an abstract political thing. This is actually about people’s lives and futures.”

Unsurprisingly, passions were high all around, but most of the clashes were limited to shouting and chanting. At one point, early in the rally, one anti-choicer started running back and forth in front of the pro-choice quilt, yelling, “Repent!” and accusing the people of holding it of being murderers, all while blowing on, of all things, a didgeridoo.

Nearly all the pro-choice activists pointedly ignored the provocation, but two people, a white man and a black woman, got up in his face about it. After it broke up, I asked the woman about it and she said, “I usually stay out of things like that, but this time I just had to say something. If he is for Jesus, why not feed homeless people? Why not do something about police violence?”

But by and large, most conversations between anti- and pro-choice protesters were less frightening and more a microcosm of the social anxieties underlying the debate over reproductive rights. Most anti-choice protesters kept to themselves, but one group of men carrying large signs festooned with fetuses and religious slogans took it upon themselves to wander about the pro-choice crowd, issuing condescending lectures to whatever women were unfortunate enough to meet their eyes. It was like watching the creepy guys at the bar hitting on women, except in this case, the creeps weren’t failing to get laid, but failing to convince women they don’t deserve basic human rights.

One of them told a young woman he was "debating" that abortion is the equivalent of slavery.

“You’re trying to tell me that controlling my own body is the same thing as slavery?” she asked, incredulous, adding that slavery is about controlling someone else’s body, really making the entire analogy quite ridiculous.

Not that he was deterred, but instead kept pushing his point until a female friend came and rescued her, which just reinforced that eerie creep-in-the-bar sensation.

The relatively small number of anti-choicers out protesting was a big surprise. This is the biggest abortion case since Planned Parenthood v Casey and may even be the biggest since Roe vs. Wade. Anti-choice activists tend to be connected to a system of Christian churches and schools that will organize and transport huge numbers of people to these kinds of events, trying to shore up that beloved but discredited myth that conservatives make up some kind of “silent majority”. But somehow, the numbers were paltry, meaning that the few I spoke to already seemed exhausted from talking to reporters.

Since Roe vs. Wade, Gallup polling shows that fewer than 1 in 5 Americans wants to ban abortion outright. A significant number, often a majority, of Americans will sit in judgment of women who get abortions. However, when you make them actually think about real women who need care, instead of the careless sluts of anti-choice imagination, over 70 percent of Americans want abortion care to be safe and offered in a non-judgmental environment.

Hopefully, the Supreme Court will agree with the majority of Americans and will overturn this Texas law that serves to make the abortion experience as miserable as possible, when it's not erasing safe, legal access altogether.