Expect Kelly to show Trump no mercy at tonight's debate—but which version of Trump will show up? 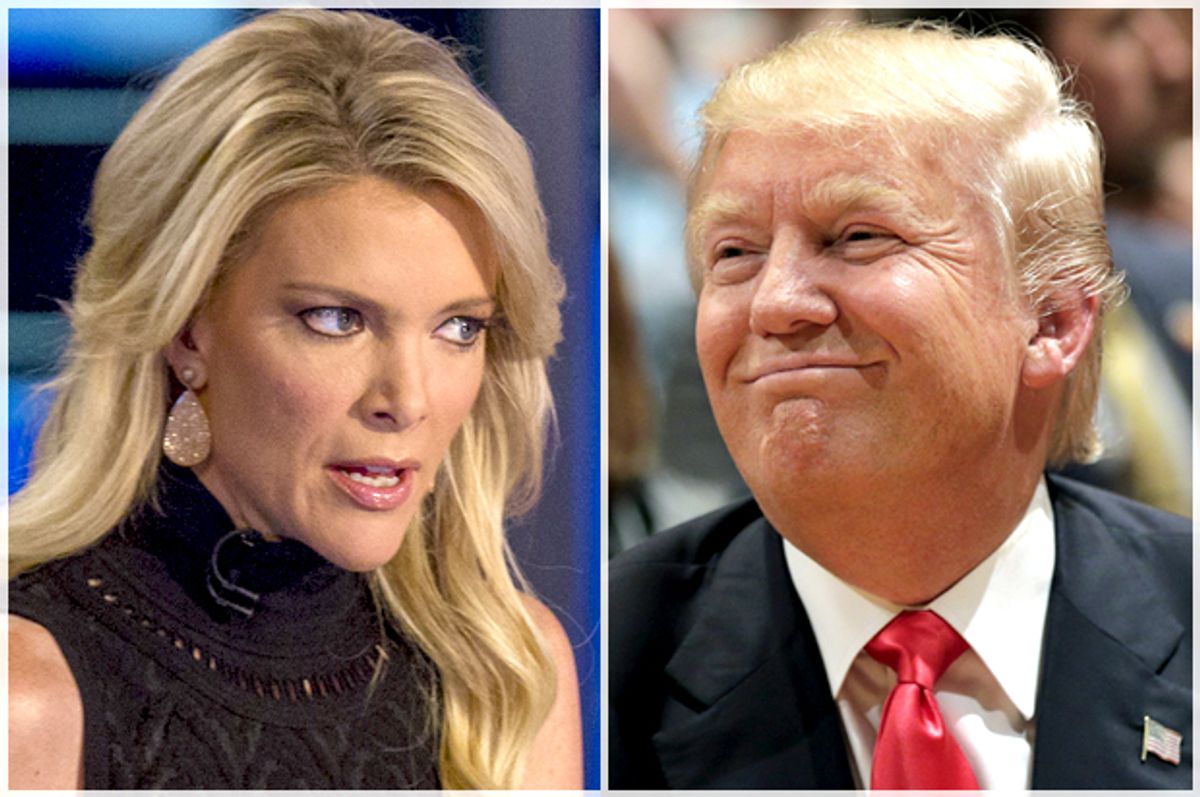 A day doesn’t seem to go by of this 2016 primary season without presumptive GOP presidential nominee Donald Trump getting into a snit-fit with some member of the Republican establishment. This morning, it was former nominee Mitt Romney, who went out of his way to deliver a speech condemning Trump. For the past week, it’s been Senator Marco Rubio, Trump’s most vocal opponent in the primary—one who is trying and failing to be just as charmingly irreverent as the Donald. And before the former Governor dropped out of the race, Jeb Bush was a frequent and “Sad!” punching bag.

But aside from elected officials he’s theoretically campaigning against, Trump’s public enemy no. 1 for the past several months has been Fox News anchor Megyn Kelly. Their meeting on August 6, the date of the first Republican debate, turned rancorous when Trump got defensive at Kelly’s question about the names he has called women in the past. From then on, the candidate has hounded her on his immensely popular Twitter, engaging in a professional media version of schoolyard taunting—calling her names, commenting on her menstrual cycle, and refusing to come to a party at her house (which was, in this case, the second Fox News debate, on January 28). Trump boycotted the second debate, which Kelly co-moderated, and instead held a counter-programming rally “for veterans” for the first hour of it, carried by MSNBC and CNN.

Tonight, after seven months of whingeing, Trump will have to stand at a podium in front of Megyn for the third Fox News debate, and one where the stakes are quite different; Trump is the lead GOP nominee. Kelly has been reasonably professional throughout this whole affair. She is a good interviewer and a competent journalist, one who is able to maneuver past the inflated egos and pompous grandstanding of all the candidates, not just Trump.

In her interview with Vanity Fair, Kelly said of that infamous question on gender:

I wrote it. I researched each line item myself. It was interesting to me after the debate when people started fact-checking my question. My own reaction was “Bring it on.” You think I’d go out there and ask a question like that at the first G.O.P. debate without making sure I was bulletproof on every single word?

In the second debate, Kelly was merciless, cutting the other candidates down to size with clip-reels and follow-ups on the hypocrisy of candidates’ campaign rhetoric. History suggests she will not show Trump anything different in this debate. And Fox News is so tied to the GOP establishment that evaluating Trump’s Republican-ness is going to be a major angle.

The real question is which Donald Trump will show up. As I’ve mythologized previously, Trump is a kind of assimilating juggernaut, one that can turn nearly every seeming negative into an advantage. The Washington Post’s Callum Borchers speculates that Trump will be on his best behavior, because the candidate’s stance in each debate has been one calculated to advance his current image with the country. For this debate, Trump needs to be a “unifier,” because he’s already, in his mind, running for the general election.

But the Trump that shows up could still be carnival-sideshow über-troll Trump. The stubborn question of the party’s embrace is still outstanding, the GOP having painted themselves into the hilarious corner of having no viable candidate except Trump or a Democrat. Trump is still clamoring for acceptance from either the party or Fox News, with a kind of childish insistence on being loved that even further depicts the man as one who has never heard the word “no” in his entire life. His face-off with Kelly tonight is perhaps the first test of whether or not he’s going to be able to play nice with that network and with the GOP. Personally, I hope it’s a shitshow.