Lesson of 1972 isn't that progressive nominees lose. Dems lose when they are out of step with voters, like Hillary 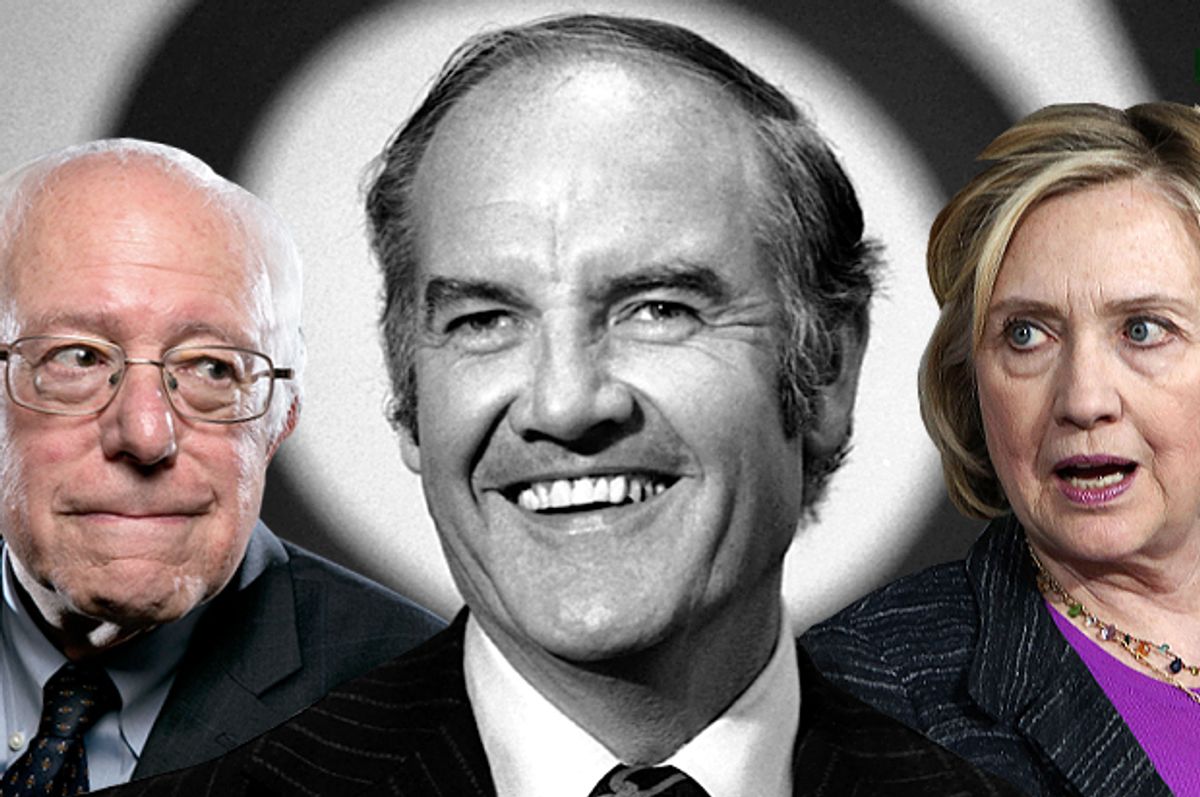 This election cycle, Democratic Party leaders are pleading with younger voters to heed the lessons of history. Echoing George Santayana’s famous warning: “Those who cannot remember the past are condemned to repeat it,” they urge millennials to take a close look at what happened to Democrats in 1972. That was the year, they explain, that the Democratic Party made a monumental blunder at its national convention by empowering young people, women and minorities at the expense of party elites. The result was the nomination of George McGovern, a candidate whose ideas were so radical that they guaranteed a landslide victory for Richard Nixon.

Leaving aside whether such an interpretation of 1972 is accurate, there is a more fundamental issue here.  What if pundits and Democratic Party leaders are focusing on the wrong election?  What if the lessons that history has for us are to be found not in 1972 but in 1968?  What if we are heeding the absolutely wrong warnings?

Much like 2016, the 1968 election was supposed to be a coronation. Lyndon Johnson had won the White House four years earlier with one of the landslide victories of the 20th century.  Few doubted he would be reelected, and no establishment politician even considered challenging Johnson for the nomination.  But also like 2016, a relatively obscure senator felt that there had to be a candidate in the race who would bring up issues that were in real danger of being ignored. In 1968 that senator was Eugene McCarthy of Minnesota and the issue was the Vietnam War.

Political pundits dismissed McCarthy as a fringe candidate who had absolutely no chance of winning. But McCarthy’s campaign galvanized young people. An army of volunteers descended upon New Hampshire.  Hippies, who a few weeks earlier had been wearing jeans and long hair, decided to “Get Clean for Gene.” Young men shaved their beards, young women donned dresses and all began going door to door throughout the Granite State.

McCarthy did not win New Hampshire but he took 20 of the 24 delegates, a result that sent shockwaves through the political establishment. Four days later Robert Kennedy, who had earlier declined to run because he assumed the election belonged to Johnson, threw his hat into the ring.  Two weeks after that in an absolutely astounding turnaround of events, the inevitable front-runner Lyndon Johnson dropped out of the race.  Much like 2016, “inevitability” was not quite as inevitable as everyone had initially assumed.

With Johnson’s departure, the Democrats needed an establishment candidate and looked to Johnson’s vice president, Hubert Humphrey. Throughout April and May, as Kennedy and McCarthy battled for votes in the primaries, Humphrey followed a different strategy. Well aware that the majority of delegates in 1968 were not going to be selected by voters but by the party elite in the non-primary states, he focused his efforts on wooing establishment politicians. By doing so Humphrey managed to build a formidable delegate lead much like Hillary Clinton is trying to do by locking in Super Delegates, today’s version of non-elected delegates chosen by party leaders.

When the Democrats met in Chicago late in the summer of 1968, the field had been tragically narrowed two and a half months earlier with the assassination of Bobby Kennedy. Only two candidates remained, Hubert Humphrey and Eugene McCarthy. Humphrey had not won a single primary. Indeed, his primary total was a minuscule 161,143 votes. But he controlled the most delegates.  By contrast, McCarthy had received 2,914,933 primary votes, almost 20 times the number that Humphrey could claim.  Yet, by the time the balloons had settled onto the convention floor, a Democratic Party controlled by machine politicians and union leaders had chosen Hubert Humphrey as the Democratic nominee.

As the race for the White House entered its final phase, a war-weary electorate, clearly frustrated by the status quo, had a choice.  They could go with the establishment Democrat, who promised to continue Johnson’s policies, or they could elect a Republican, who had long ago mastered the sorts of campaign strategies that are currently propelling Donald Trump’s campaign. Much like Trump, Richard Nixon offered solutions without providing specifics, telling voters that he had a “secret plan” to “end the war but win the peace” in Vietnam. And while Nixon did not target Mexicans or Muslims, he did promise to restore law and order by cracking down on entitled and unruly young people demonstrating on the nation’s campuses and black people taking to the streets in urban neighborhoods. When the results came in, Nixon had edged past Humphrey in the popular vote and had a comfortable margin in the Electoral College.

Looking at 1968, it would seem the lesson that history has for us is that Democrats need to be really careful about assuming that the establishment candidate is the key to electoral victory. But what about 1972? Isn’t the lesson of that election that Democrats suffer their most devastating losses when they run candidates who speak to the party’s progressive base.

Actually, no. The lesson of 1972 is something quite different. To begin with, McGovern was not a particularly strong candidate. He had secured the nomination with only a quarter of the primary votes.  The unions refused to work for him. And he ran a poor campaign. Even more significant, he was going up against a sitting president, Richard Nixon, who had brought troop levels in Vietnam down from almost half a million to around 30,000, had eased Cold War tensions by going to China and had stabilized the economy, at least temporarily, by implementing wage and price controls. Nixon would have been tough to beat under any circumstances, and McGovern was not the candidate to do it.

But the real lesson that McGovern’s defeat teaches us is not the dangers of progressivism so much as the dangers of being out of step with the electorate. Every few decades, the existing political order is completely overturned and in the upheaval a new order emerges.  This happened in the 1930s, when Franklin Delano Roosevelt replaced what has been called the “Republican Ascendancy” with his New Deal Coalition. It happened again in the late 1960s and early 1970s when the rise of the right replaced the liberalism of the New Deal.

We are due for another upheaval and there are indications that we are actually in the middle of one right now. If that is the case, then what the election of 1972 teaches us is not that McGovern was too liberal for voters but that he was too out of step. He was trying to run as a '60s liberal when the electorate had moved well beyond the '60s, just as Clinton is running as a '90s triangulating liberal when voters are hungry for change.

History has some important lessons to teach.  They are just not the one that pundits and establishment politicians are claiming.

Kathy Donohue is a professor of history at Central Michigan University and the author of Freedom from Want: Modern American Liberalism and the Idea of the Consumer and the editor and a contributor to With Liberty and Justice for All: Rethinking Politics in Cold War America. She has taught at Barnard College and the University of Georgia. Her current book project is Information Wars: The Public’s Right to Know and the Making of Modern America.