It's not enough to disavow the Klan: Racists and Republicans have years of experience disavowing Klan, but supporting racist politics

Racial disparities don't exist because Americans back the Klan. They persist because of unfair policies 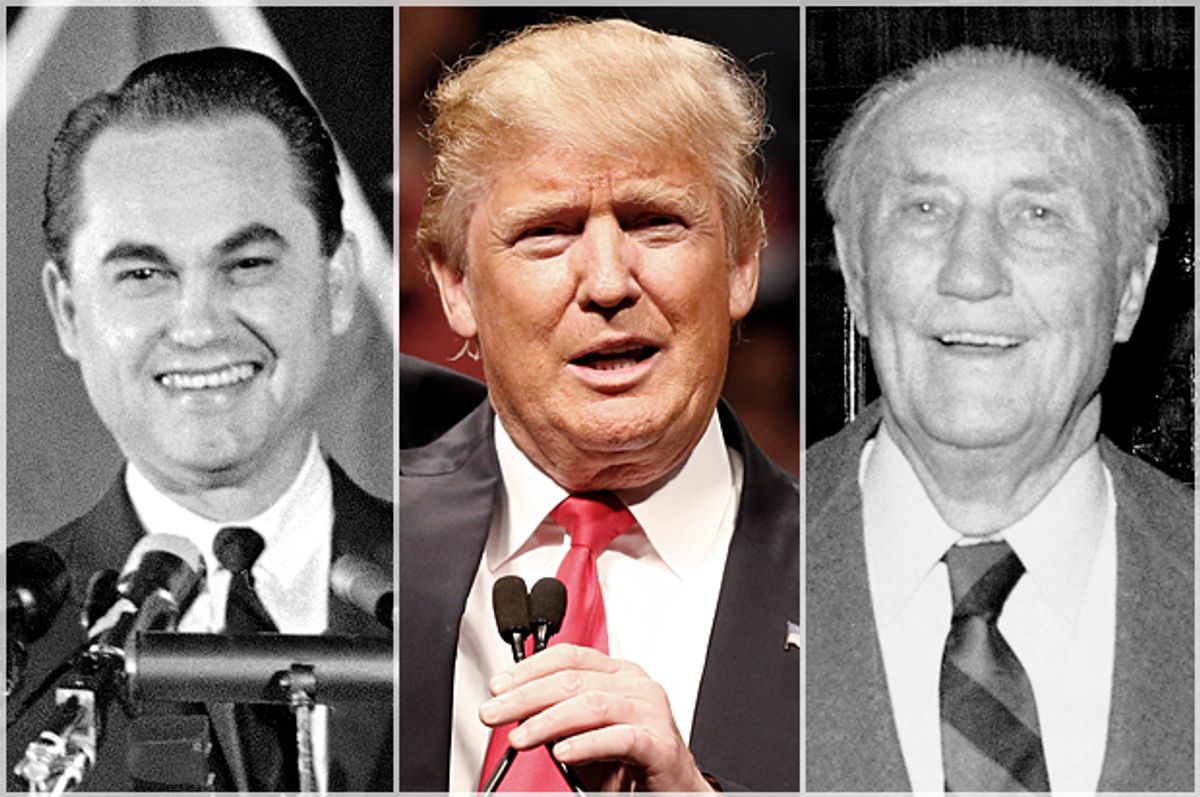 If Donald Trump is telling the truth, he only recently learned that David Duke, former grand wizard of the Ku Klux Klan, is an avowed segregationist. Apparently, the KKK and its history have faded from many white Americans’ memory. Jeffrey Lord argued on national television this week that the Klan is an invention of “the left.” As native sons of the South, we could forgive these men their ignorance. (“Bless their hearts. They ain’t from around here,” is the polite way to say it.) But we can neither forgive nor ignore the way 400 years of white supremacy have been naively reduced to whether a candidate will disavow the support of a hate group leader. Racism lives on in policies that perpetuate racial disparities, with or without the KKK.

For those unfamiliar with Southern history, white supremacists in the South have a long history of disavowing the KKK. Strom Thurmond disavowed them in 1964, even as he filibustered the Civil Rights bill in the U.S. Senate. White Citizens Councils disavowed them while they fought desegregation in Mississippi. George Wallace publicly disavowed Klan violence in Alabama, but hired Klansman Al Lingo to oversee his state’s Highway Patrol.

Nor 60 years before that. Here in North Carolina, Democrats waged a takeover of state government in 1898, seeding a propaganda campaign to incite racial fears and arming the vigilante Red Shirts. But no sooner than they had regained power, Democratic leaders disavowed all violence and called for civility and a restoration of order.

Racial disparities in America have not persisted since the end of the Civil War because people believe in the ideology or the tactics of the KKK. Inequality continues because we have never finished the work of Reconstruction.

“Forty acres and a mule” was the promise to formerly enslaved people during the First Reconstruction, recognizing that their success would require an economic base. But black representatives in Reconstruction legislatures were clear that more was needed; they demanded equal access to education, voting rights and equal protection under the law. The Klan’s violence didn’t end Reconstruction. While terror intimidated both black and white progressives, it took the denial of African-American voting rights and regressive legislative action to usher in the era of Jim Crow. While white Southerners have often been willing to resort to terror to maintain control, they disavow violence whenever power is securely in their hands.

We have learned that nothing challenges white supremacy more than the people joining hands across dividing lines to confront race-based policy. In the summer of 2013, more than 1,000 black, white and brown North Carolinians--rich and poor, Republican, Independent and Democrat—were arrested in the largest state government-focused civil disobedience campaign in U.S. history. Our movement noted that the same constitutional provision that prohibits KKK influence in state government also guarantees all citizens the right to instruct our legislators about matters affecting the general welfare. A Superior Court judge agreed, dismissing charges against us and affirming our right to publicly disavow race-based policies.

Some Republicans have suggested they cannot support Trump if he refuses to disavow the KKK. But the question we should ask of every politician is, Do you also disavow policies that perpetuate racial inequality and disparity. Because it is possible to reject the Klan and still support racism. We need more than trite disassociation; we need true political transformation.

We cannot reconstruct democracy in America without disavowing efforts to resegregate public schools through voucher programs, neighborhood schools and attacks on public funding. In order to address disparities in our criminal justice system, we must also disavow the racially charged War on Drugs, mandatory minimum laws, and the death penalty. More black people died this year because of state governments refusing to expand Medicaid than at the hands of police officers. We must disavow policies that deny a living wage while 62 million Americans struggle to survive on less than $15 an hour. Fifty-four percent of African-Americans earn less than a living wage, and many Southern states do not have a minimum wage 150 years after the end of slavery. We must also disavow the inherent racism that fuels fear and hate mongering by politicians toward Latinos and Muslims.

Every aspect of institutional racism must be disavowed to complete the work of Reconstruction in America, but maybe none is more important than the current attack on voting rights. In the midst of the first presidential campaign since the Supreme Court’s Shelby decision gutted the Voting Rights Act, we must disavow the racially gerrymandered districts and voter suppression laws, many of which are in play for the first time during this primary season. Nothing could be more racist than the cynical attempt to maintain white control in a nation where whites are quickly becoming one among many minorities by suppressing people of color’s voting power.

These are not conservative or liberal issues; they are moral issues that deserve the same outrage that Americans on the left and the right have expressed about the KKK.

It’s past time for a grown-up conversation about race in America. Let’s stop talking about whether Trump will, has or should disavow the KKK and start asking who will disavow the policies that perpetuate racial disparities and prevent us from achieving freedom and justice for all.