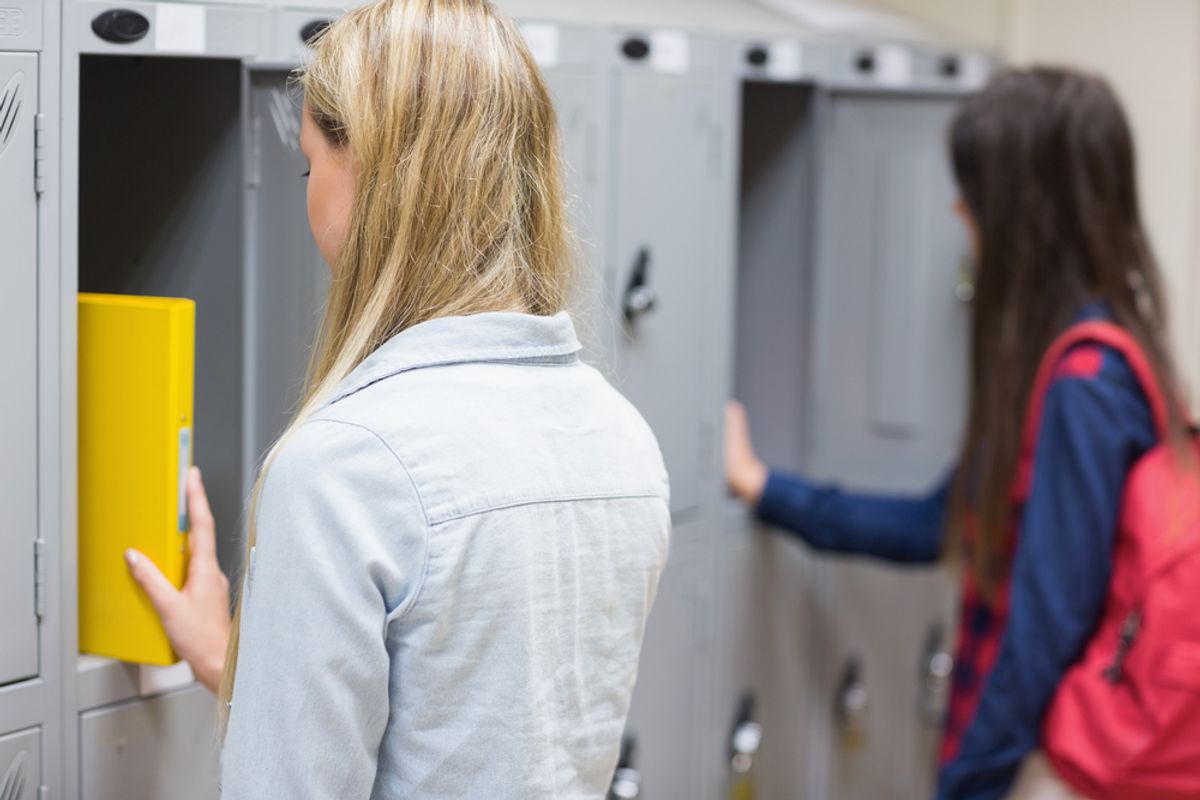 Under new guidelines, the FBI is instructing high schools across the country to report students who criticize government policies and “western corruption” as potential future terrorists, warning that “anarchist extremists” are in the same category as ISIS and young people who are poor, immigrants or travel to “suspicious” countries are more likely to commit horrific violence.

Based on the widely unpopular British “anti-terror” mass surveillance program, the FBI’s "Preventing Violent Extremism in Schools" guidelines, released in January, are almost certainly designed to single out and target Muslim-American communities. However, in its caution to avoid the appearance of discrimination, the agency identifies risk factors that are so broad and vague that virtually any young person could be deemed dangerous and worthy of surveillance, especially if she is socio-economically marginalized or politically outspoken.

This overwhelming threat is then used to justify a massive surveillance apparatus, wherein educators and pupils function as extensions of the FBI by watching and informing on each other.

The FBI’s justification for such surveillance is based on McCarthy-era theories of radicalization, in which authorities monitor thoughts and behaviors that they claim to lead to acts of violent subversion, even if those people being watched have not committed any wrongdoing. This model has been widely discredited as a violence prevention method, including by the U.S. government, but it is now being imported to schools nationwide as official federal policy.

Schools as hotbeds of extremism

The new guidelines depict high schools as hotbeds of extremism, where dangers lurk in every corner. “High school students are ideal targets for recruitment by violent extremists seeking support for their radical ideologies, foreign fighter networks, or conducting acts of violence within our borders,” the document warns, claiming that youth “possess inherent risk factors.” In light of this alleged threat, the FBI instructs teachers to “incorporate a two-hour block of violent extremism awareness training” into the core curriculum for all youth in grades 9 through 12.

According to the FBI’s educational materials for teenagers, circulated as a visual aide to their new guidelines, the following offenses constitute signs that “could mean that someone plans to commit violence” and therefore should be reported: “Talking about traveling to places that sound suspicious”; “Using code words or unusual language”; “Using several different cell phones and private messaging apps”; and “Studying or taking pictures of potential targets (like a government building).”

Under the category of domestic terrorists, the educational materials warn of the threat posed by “anarchist extremists.” The FBI states, “Anarchist extremists believe that society should have no government, laws, or police, and they are loosely organized, with no central leadership… Violent anarchist extremists usually target symbols of capitalism they believe to be the cause of all problems in society—such as large corporations, government organizations, and police agencies.”

If you "see suspicious behavior that might lead to violent extremism," the resource states, consider reporting it to "someone you trust," including local law enforcement officials like police officers and FBI agents.

This terrorist threat does not stay within the geographic bounds of high schools, but extends to the Internet, which the FBI guidelines describe as a “playground” for extremism. The agency warns that online gaming “is sometimes used to communicate, train, or plan terrorist activities.” Encryption, ominously referred to as “going dark,” is often used to facilitate “extremism discussions,” the agency states. In reality, encryption is a commonly used form of protection against government spying and identity theft and is often employed to safeguard financial transactions.

Young Muslims are the real targets

At the surface level, the FBI’s new guidelines do not appear to single out Muslim students. The document and supplementary educational materials warn of a broad array of threats, including anti-abortion and white supremacist extremists. The Jewish Defense League is listed alongside Hizbollah and Al Qaeda as an imminent danger to young people in the United States.

But a closer read reveals that the FBI consistently invokes an Islamic threat without naming it. Cultural and religious differences, as well as criticisms of western imperialism, are repeatedly mentioned as risk factors for future extremism. “Some immigrant families may not be sufficiently present in a youth’s life due to work constraints to foster critical thinking,” the guidelines state.

“The document aims to encourage schools to monitor their students more carefully for signs of radicalization but its definition of radicalization is vague,” said Arun Kundnani, author of The Muslims are Coming! Islamophobia, extremism, and the domestic War on Terror and an adjunct professor at New York University. “Drawing on the junk science of radicalization models, the document dangerously blurs the distinction between legitimate ideological expression and violent criminal actions.”

“In practice, schools seeking to implement this document will end up monitoring Muslim students disproportionately,” Kundnani told AlterNet. “Muslims who access religious or political material will be seen as suspicious, even though there is no reason to think such material indicates a likelihood of terrorism.”

The Obama administration’s Countering Violent Extremism (CVE) program is heavily influenced by its British counterpart, which exclusively focuses on spying on Muslim communities and has been deeply controversial from the onset.

Launched in the wake of the 2005 London bombings, the British the “Preventing Violent Extremism” (Prevent) program monitors and surveils Muslim communities and people, including mosque-goers and members of community organizations who have committed no wrongdoing. The iniative has been broadly criticized as oppressive and stigmatizing of British Muslims, including by a committee of British lawmakers in 2010.

Yet Prevent has expanded since implementation, and as of summer 2015, British public schools are now mandated to report students for supposed early warning signs of extremism. According to the advocacy organization CAGE, this program has led to the wide-scale interrogation of children without parental consent. Just last month, a Luton high school student was questioned by police for wearing a “Free Palestine” badge.

The first public iteration of the U.S. counterpart to this program emerged five years ago to “address ideologically inspired violence in the Homeland,” uniting a broad array of government agencies, including the FBI and Department of Homeland Security. In 2015, Attorney General Eric Holder announced a CVE summit at the White House and unrolled three “pilot programs” in Boston, Minneapolis and Los Angeles. According to the Council on American-Islamic Relations, these initiatives solely target Muslims in each of these cities.

Muslim communities and human rights campaigners have raised profound concerns about civil rights violations. “Past injustices have taught us to be wary when the government redefines its moral and legal authority in response to overbroad national security concerns,” reads a statement from nearly 50 Muslim organizations in the Minneapolis area. “It is our recommendation that the government stop investing in programs that will only stigmatize, divide and marginalize our communities further.”

But instead, the government is expanding CVE programming into high schools across the country.

“The whole concept of CVE is based on the conveyor belt theory – the idea that ‘extreme ideas’ lead to violence,” Michael German, a fellow with the Brennan Center for Justice’s Liberty and National Security Program, told AlterNet. “These programs fall back on the older ‘stages of radicalization’ models, where the identified indicators are the expression of political grievances and religious practices.”

The lineage of this model can be traced to the first red scare in America, as well as J. Edgar Hoover’s crackdown on civil rights and anti-war activists. In the post-9/11 era, the conveyor-belt theory has led to the mass surveillance of Muslims communities by law enforcement outfits ranging from the FBI to the New York Police Department.

U.S. government agencies continue to embrace this model despite the fact that it has been thoroughly debunked by years of scholarly research, Britain’s M15 spy agency and an academic study directly supported by the Department of Homeland Security.

Even the FBI’s new guidelines claim that the agency “does not advocate the application of any psychological or demographic ‘profiles’ or check lists of indicators to identify students on a pathway to radicalization.”

Yet in the same breath, the FBI freely lists “concerning behaviors” that indicate an individual is “progressing on a trajectory to radicalization and/or future violent action in furtherance of an extremist cause.” In other words, the FBI is using new terminology to call for students to be profiled as potential future terrorists.

As Hugh Handeyside, staff attorney for the ACLU’s national security project, told Alternet, “Broadening the definition of violent extremism to include a range of belief-driven violence underscores that the FBI is diving head-first into community spying. Framing this conduct as ‘concerning behavior’ doesn’t conceal the fact that the FBI is policing students’ thoughts and trying to predict the future based on those thoughts.”

If the FBI’s criteria are to be believed, children who exhibit “development delay or disorders, resulting from low quality supportive environments” are at greater risk. So too are the “disenfranchised – student feeling lost, lonely, hopeless, or abandoned.” The FBI calls for greater scrutiny of students with mental health disorders and identifies neighborhoods families, and socio-economic status as factors to watch out for.

There are already reasons to be concerned about who will be most vulnerable under this mass surveillance plan. In what is popularly known as the “school-to-prison pipeline”, students of color and young people with disabilities are already disproportionately suspended, expelled, arrested and funneled into juvenile prisons for alleged behavioral infractions at school.

The FBI’s instructions to surveil and report young people not for wrong they have committed, but for violence they supposedly might enact in the future, is likely to promote an intensification of this draconian practice. Using a program initiated to spy on Muslim-American communities, the government is calling for sanctuaries of learning to be transformed into panopticons, in which students and educators are the informers and all young people are suspect.