Too loony for Fox News: Fox created the fact-free GOP, then Trump stole it away

Gullible Fox viewers are the most misinformed. That made it easy for Donald Trump to fill vacuum of ignorance, fear 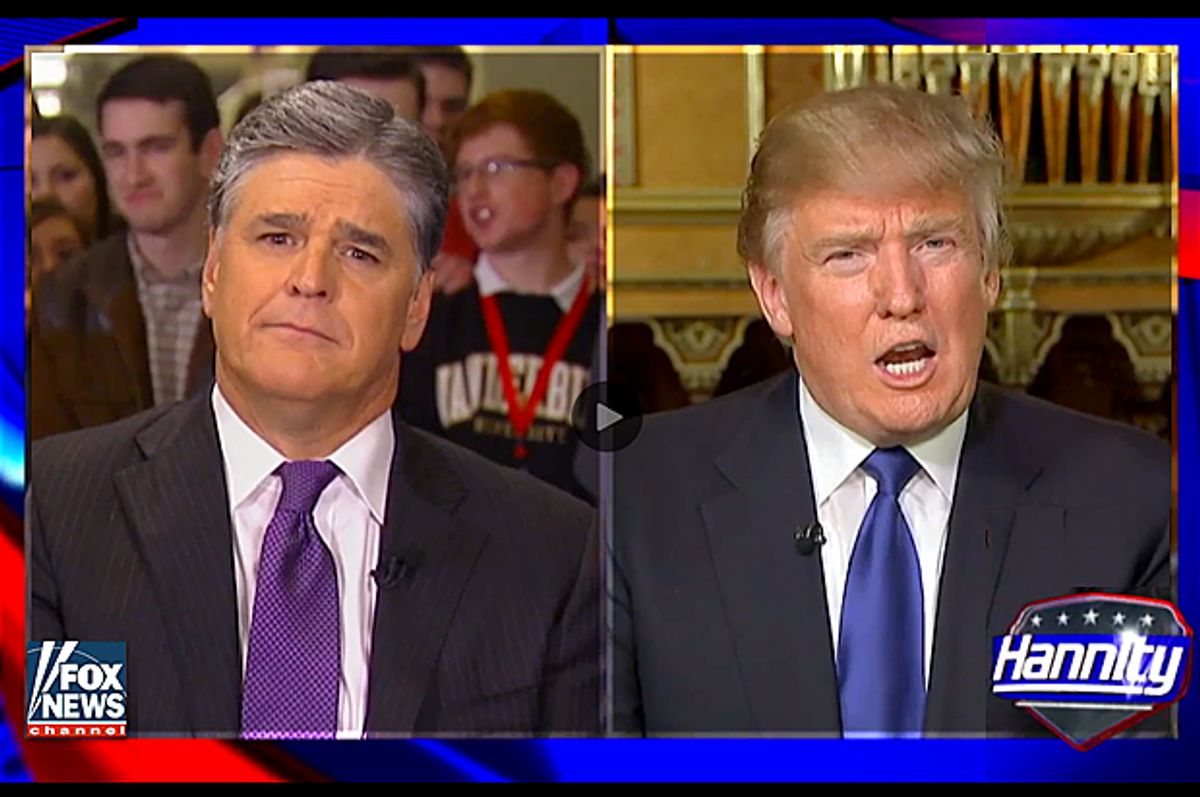 On a recent “Face the Nation” appearance, Marco Rubio blamed Donald Trump’s extraordinary success as a presidential candidate on — you guessed it — “the media.” In his words, “the media coverage for Donald Trump has almost been cheerleading over the last couple weeks and I’m convinced [it’s] because many in the press want him to be nominee.” Why? Because it would provide Hillary Clinton “a clear shot to the Oval Office.” Rubio then added, “So I think there’s a kind of weird bias here in the media rooting for Donald Trump because they know he’s the easiest Republican to beat.”

The notion that the so-called lamestream media (a neologism popularized by Sarah Palin) has a liberal bias is, as those of us on the left know, widespread on the right. But as those of us on the left also know, it’s simply false. First of all, as a 2015 article in Politico notes, Fox News “easily dominate[s] the cable news landscape.” It’s the third most watched channel on TV, and it has “the top 14 most-viewed cable news shows.” Another survey reveals that Fox News is by far the “most trusted national news channel” in America, as hard as that may be for some to believe. Furthermore, anyone with a functioning nervous system can see that Fox News is an activist organization with strong conservative principles that effectively functions as a branch of the Republican Party. Its motto “Fair and Balanced” could hardly be more Orwellian, given the right-wing lens through which it views world affairs. It follows that American news is, if anything, conservative in its overall political orientation. Fox News is more popular, influential and trusted than any other network in the country. It is the lamestream media.

Second, if there’s a discernible bias toward “liberal” views among other, less-watched news networks, it’s for one simple reason. To borrow a phrase from the comedian Stephen Colbert: “Reality has a well-known liberal bias.” For example, consider the persistent and widely held myth of American exceptionalism. As I detail in a previous article for Salon, with respect to a huge range of life-quality categories like prosperity, happiness, opportunity, education, health and so on, the United States consistently fails to rank as one of the top 10 best countries in the world. In some cases — for example, with respect to childhood poverty — we’re barely even a developed country. And as Politifact recently confirmed, the American dream is actually easier to fulfill in Europe than it is in the contemporary U.S.

The facts simply don’t support the view that America is, in the eloquent words of Sean Hannity, “the greatest, best country God has ever given man on the face of the earth.” Furthermore, when it comes to issues like climate change, environmental degradation, torture, taxes, healthcare, immigration, racism and terrorism — to name just a few — reality clearly supports a progressive worldview. The fact is that sea levels are rising due to greenhouse gases, there’s a serious problem of institutionalized racism among the police, and trickle-down economics doesn’t work. Don’t blame the messenger when verifiable claims about the world happen to support “liberal” persuasions rather than conservative ones.

And finally, yes, the media — including Fox News — does have a single pervasive bias that colors its reporting of news events. I’ll admit that the venerable senator from Florida is half-correct. But the bias isn’t what conservatives are so stubbornly convinced that it is. Rubio himself seems to acknowledge the existence of this special bias when he says (from the same conversation quoted above) that, “One, I think [the media] think [that covering Trump is] going to be good for ratings.” Stop right there, Rubio — you nailed it. As the social critic and comedian Jon Stewart once insightfully suggested during an interview with Chris Wallace, the media is strongly biased towards apolitical phenomena like “conflict” and “sensationalism.”

Is Stewart right? Well, I can hardly think of a better confirmation of his hypothesis than the media’s incessant coverage of Donald Trump. Why does CNN ignore Bernie Sanders’ huge rallies but broadcast Trump’s incoherent ramblings about “winning, winning, winning” and “China, China, China” (interspersed with references to violating the Geneva Conventions and bringing back waterboarding)? The answer isn’t conspiratorial, as Rubio intimated: There’s no grand plan to get a Democrat in the White House by pitting Sanders or Clinton against the highly unfavorable Trump. Things are much simpler than this: Trump shaking a water bottle around and shouting, “It’s Rubio!” is just plain more entertaining than watching Sanders discuss substantive issues that genuinely impact American life. The media are in the business of maximizing profits, and there’s a lot more money to be made covering Trump than Sanders, Clinton, Rubio or Cruz. It’s capitalism, Rubio — you know, the economic system that you so dearly cherish.

But there is a cynical background to this picture. Yes, the American audience craves mindless, inane entertainment over intricate discussions of arcane policy. But a demagogue like Trump wouldn’t be possible if not for the impoverished culture of anti-intellectualism that conservative media like Fox News have worked so tirelessly to foment. On the one hand, at least seven studies to date show that Fox News denizens constitute the most misinformed news audience in the country. One study even found that Fox News viewers are more misinformed than people who don’t watch any news at all. From climate change to Obama’s birthplace to the Iraq War to Obamacare, conservatives are far more likely to hold demonstrably false beliefs — often with tremendous, unshakable confidence. On the other hand, and even more significantly, Fox News instills in its viewers a formidable distaste for critical thinking. It encourages dogmatism while discouraging curiosity. It teaches people to care more about “what” a belief says about the world than “why” one should accept it. It propagates what philosophers would describe as bad epistemology.

This is incredibly dangerous to our country’s future because critical thinking is the intellectual backbone of every functioning democracy. The fact that Trump is leading a pack of truth-challenged White House hopefuls is unambiguous evidence that our democracy is not functioning properly. A dysfunctional democracy is, of course, exactly what Fox News wants, for the obvious reason that it makes controlling the masses of cognitively stunted voters much easier. But then Trump rolled in from left field with his billions of dollars and charismatic authoritarianism and quickly filled the vacuum of ignorance, fear and gullibility that Fox News and its media cohorts had diligently carved out for the past seven years.

So, Rubio is right that the media is biased, but wrong that this bias is “liberal.” Perhaps Rubio should start bullying the bully of bullies right back. Mocking Trump’s “small hands”  and suggesting that Trump wet his pants during one of the Republican debates is a good start, for sure. But there are plenty of potential jokes that are being left untold by Rubio and his fellow underdog candidates. They could, for example, laugh about the “greasy and tasteless” Trump Steaks (sold only by the Sharper Image), make fun of Trump for a cringe-worthy incest joke about dating his daughter, or encourage their followers to start referring to Trump as “Drumpf,” a hilariously strange monosyllabic sound that was once his family’s surname. If Rubio stoops down to Trump’s fourth-grade level of interacting with his opponents, he might just find himself with a bit more media attention.