David Brooks keeps his head in the sand: GOP voters won't make his fantasy of derailing Trump and Cruz reality

The problem: The party conservative technocrats like Brooks aspire to is not the party Republican voters want 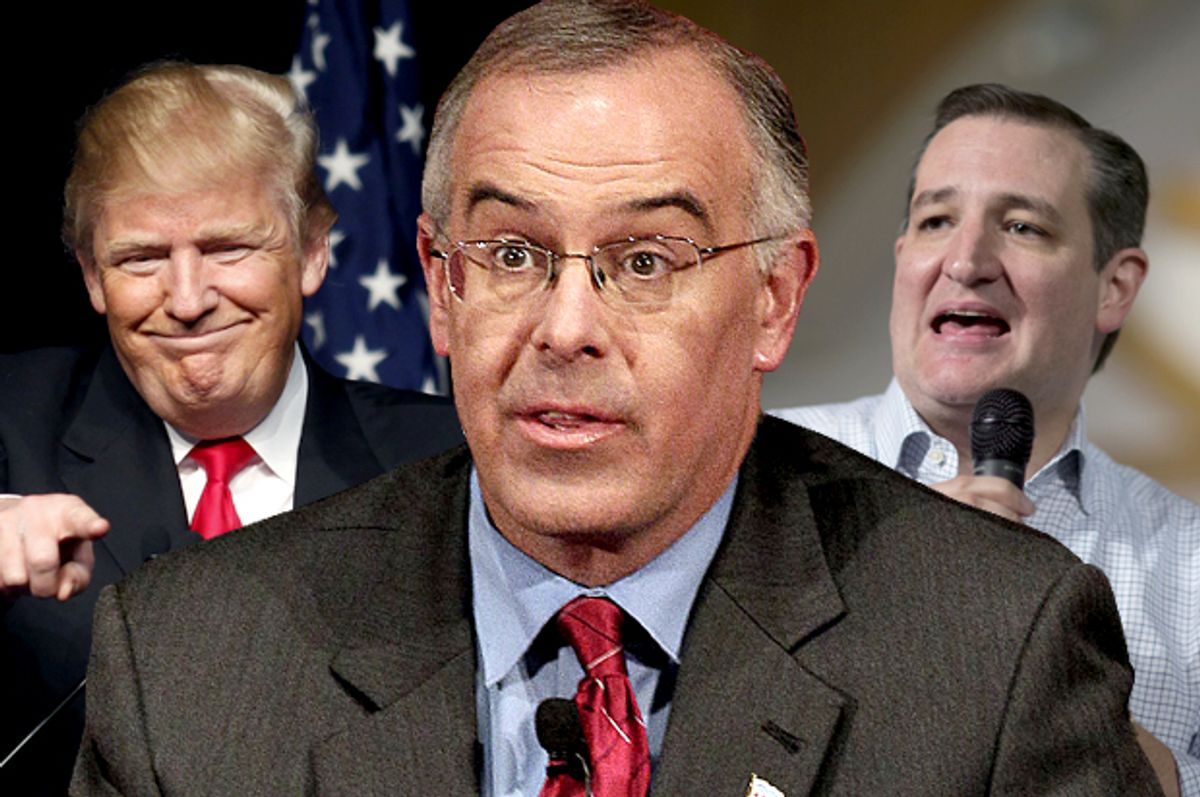 David Brooks knows the GOP is in a bad way, but he’s not worried. And he doesn’t want Republicans to worry either – for there is still hope. In his latest column, Brooks warns the party not to give itself over to Ted Cruz, a man whose only virtue is that he’s not Donald Trump.

“It’s 2 a.m.,” Brooks writes, “The bar is closing. Republicans have had a series of strong and nasty Trump cocktails. Suddenly Ted Cruz is beginning to look kind of attractive. At least he’s sort of predictable, and he doesn’t talk about his sexual organs in presidential debates!”

Brooks beseeches his Republican readers to recall how lovely the landscape looked a couple of years go when they entered this campaign “with such a deep bench of talented candidates.” Back then it was obvious that Trump was a loon and that “Ted Cruz would be a terrible general election candidate.” After all, Cruz is the most extreme and least liked member of Congress. As Brooks puts it, his “political profile is a slightly enlarged Rick Santorum but without the heart.” I’d say he’s being charitable here, but the point is well taken.

After delicately painting Cruz as an unlikable hack, Brooks gets down to business:

“There is another path, one that doesn’t leave you self-loathing in the morning. It’s a long shot, but given the alternatives, it’s worth trying. First, hit the pause button on the rush to Cruz. Second, continue the Romneyesque assault on Trump. The results on Saturday, when late voters swung sharply against the Donald, suggest it may be working. Third, work for a Marco Rubio miracle in Florida on March 15. Fourth, clear the field for John Kasich in Ohio. If Rubio and Kasich win their home states, Trump will need to take nearly 70 percent of the remaining delegates to secure a majority. That would be unlikely…The party would go to the convention without a clear nominee. It would be bedlam for a few days, but a broadly acceptable new option might emerge.”

I admire his feigned optimism, but this isn’t a plan. First, there is absolutely no evidence that Romney’s “assault on Trump” is working. Yes, Cruz scored a couple of minor victories over the weekend in Kansas and Maine, but those are caucus states, where Cruz’s organizational prowess gives him a distinct advantage. In Kentucky and Louisiana, where actual elections were held, Trump won easily, as he has in most states.

Furthermore, a new poll suggests that Romney’s speech had virtually no effect on Trump, and if anything it may have helped him. After hearing Romney’s attack, 31 percent of GOP voters “said they were more likely to vote for Trump, while 20 percent said less likely, and 43 percent said it had no impact either way.” Indeed, Trump is now more popular among GOP voters than Romney.

And this notion that Rubio will pull off an upset in Florida seems quixotic at best. The Florida senator is losing to Trump by double digits in most polls, and now Ted Cruz is pouring additional resources into the state with the explicit goal of stunting any momentum Rubio may have. So I’m not sure what Brooks means by working “for a miracle” in Florida, but it’s not happening, and even if it did, there’s no reason to think Rubio a viable candidate at this point.

Ultimately, Brooks is calling for a contested convention. He concedes that would mean “bedlam for a few days,” but that’s quite the understatement. “Brokered convention” has become a euphemism for denying Trump or Cruz the nomination they rightfully earned; as I’ve argued previously, that would leave the party in ruins, and it would certainly cost them the White House in 2016.

To his credit, Brooks acknowledges this:

“This isn’t about winning the presidency in 2016 anymore. This is about something bigger…If the GOP is going to survive as a decent and viable national party, it can’t cling to the fading orthodoxy Cruz represents. But it can’t shift to ugly Trumpian nationalism, either. It has to find a third alternative: limited but energetic use of government to expand mobility and widen openness and opportunity. That is what Kasich, Rubio, Paul Ryan and others are stumbling toward.”

I agree with the sentiment here, but there’s a problem: This is the party to which conservative technocrats like Brooks aspires – it’s not the party Republican voters want. This “third alternative” isn’t possible in today’s GOP. Once again, it has to be said: this is the party of Trump and Cruz and all the bigots and theocrats they represent. This is the party that GOP strategists have cultivated for decades with their fear-mongering and capitulations to religious demagogues. If the Republican Party wants to leave this anti-government nihilism behind, it will have to explode itself and become something else altogether. That's the reality the GOP now faces, and moderate conservatives like Brooks have yet to grapple with it.