Is the media propping up Donald Trump only to crush him when he wins the nomination? Ted Cruz seems to think so 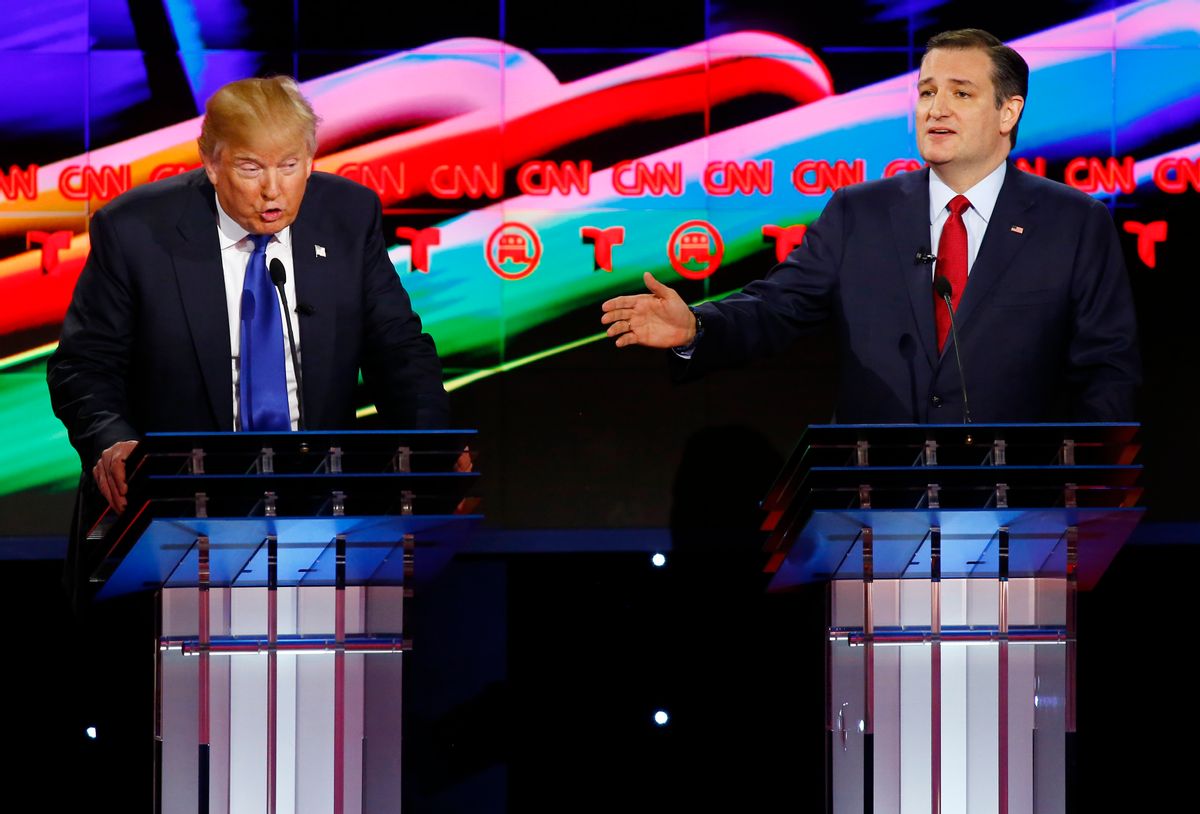 Ted Cruz has a theory. It’s a bit convoluted, but keep an open mind on this one. Appearing on CBS News’ “Face the Nation,” Cruz explained his belief that the rise of Donald Trump as a political force can be laid at the feet of the media, which have covered him incessantly ever since he announced his presidential campaign. At the same time, however, Cruz also believes that the same media forces that created Trump are purposefully sitting on all the damaging information they’ve collected about him and are just waiting until Trump is officially the Republican nominee, at which point they will unleash a deluge of anti-Trump stories that will destroy his candidacy.

Cruz has “the media” – defined as a single entity – playing three distinct roles all at the same time: Trump booster, Trump enabler and Trump assassin. And not only is there a conspiracy afoot to artificially inflate Trump until it’s too late for the GOP to do anything, the conspirators themselves are apparently sharing this information with Ted Cruz, who, as one of the victims of said conspiracy, is obviously the last person they should be telling. But Cruz, being the man of honor and principle that he is, won’t divulge the identities of the conspirators:

CRUZ: I think an awful lot of reporters — I can’t tell you how many media outlets I hear have this great expose on Donald, on different aspects of his business dealings, or his past, but they said, you know what, we’re going to hold it to June or July. We’re not going to run it now.

JOHN  DICKERSON: You’re saying reporters have told you that? They have told…

CRUZ: Absolutely. We have gotten multiple…

DICKERSON: And from which organizations have they told you?

CRUZ: You know, look, I’m not going to out media outlets, but I can tell you there is so much there.

This doesn’t make a ton of sense, but Cruz isn’t trying to make a logical argument here. He’s trying to rationalize and dismiss Trump’s popularity in terms that will appeal to conservative and Republican voters, and he’s also trying to gloss over his own prominent role in Trump’s rise to the top of the GOP presidential field.

Blaming the media for the failures of the right has long been a staple of Republican politics. It was the media that turned America against George W. Bush by reporting on all the people who were dying every day in Iraq for half a decade. The fact that Mitt Romney lost the 2012 election even though Barack Obama is the worst president who ever existed can only be explained by the scheming of the media, which stole the election for Obama. “Liberal bias” in the media is a pillar of modern conservatism, and right-wing distrust of the press as an institution is so thoroughly ingrained that the suggestion of an institution-wide conspiracy to elevate, coddle and then destroy Trump (to the benefit of Hillary Clinton) is just assumed to be plausible, if not downright likely.

The reality of the media landscape is a jumbled, directionless chase for scoops that harshly penalizes anyone who gets caught napping. To the extent that damaging information about Trump has not emerged, the more likely explanation is that the sort of investigative reporting needed to discover and develop those stories is costly, arduous and in less demand in a media environment that favors quick-hit aggregation and horserace coverage. That’s not to say no one is out there doing the digging, but the fact that Trump oppo isn’t hitting the evening news in accordance with Ted Cruz’s campaign schedule is not proof of a pro-Trump, pro-Hillary conspiracy.

In fact, the only person we know of who is guilty of perpetrating a pro-Trump conspiracy with the ultimate goal of seeing Trump destroyed electorally is Ted Cruz. It feels like ancient history at this point, but for a long time, Ted Cruz flat-out refused to say a single negative word about Donald Trump. Even as Trump’s poll numbers kept climbing and he kept popping off with racist statements and insanely authoritarian and unconstitutional policy ideas, Cruz would never take the bait when reporters prodded him to criticize Trump. “One of the reasons you’re seeing so many 2016 candidates go out of their way to smack Donald Trump is they don’t like a politician that speaks directly about the challenges of illegal immigration,” Cruz said on NBC in July. “I for one am grateful that Donald Trump is highlighting these issues.” In August, Cruz invited Trump to participate in a Washington, D.C. rally against the Iranian nuclear deal.

Cruz’s reason for coddling Trump was simple: He wanted Trump’s voters. He, like pretty much everyone else, assumed that the Trump phenomenon would be short-lived, and he wanted to be in the best position possible to absorb Trump’s supporters after the collapse. But Cruz miscalculated badly, which is why about a month before the Iowa caucus he shifted to attacking Trump to try and manufacture the collapse he believed would occur naturally. So, basically, Cruz is claiming that the media is trying to do to Trump what he tried and failed to do.