Trump's new wacko backer: This Sandy Hook truther and obscure Evangelical pastor might be the Donald's most batsh*t endorser yet

Carl Gallups is relatively unknown outside the Panhandle, but his endorsement should be cause for alarm at Trump HQ 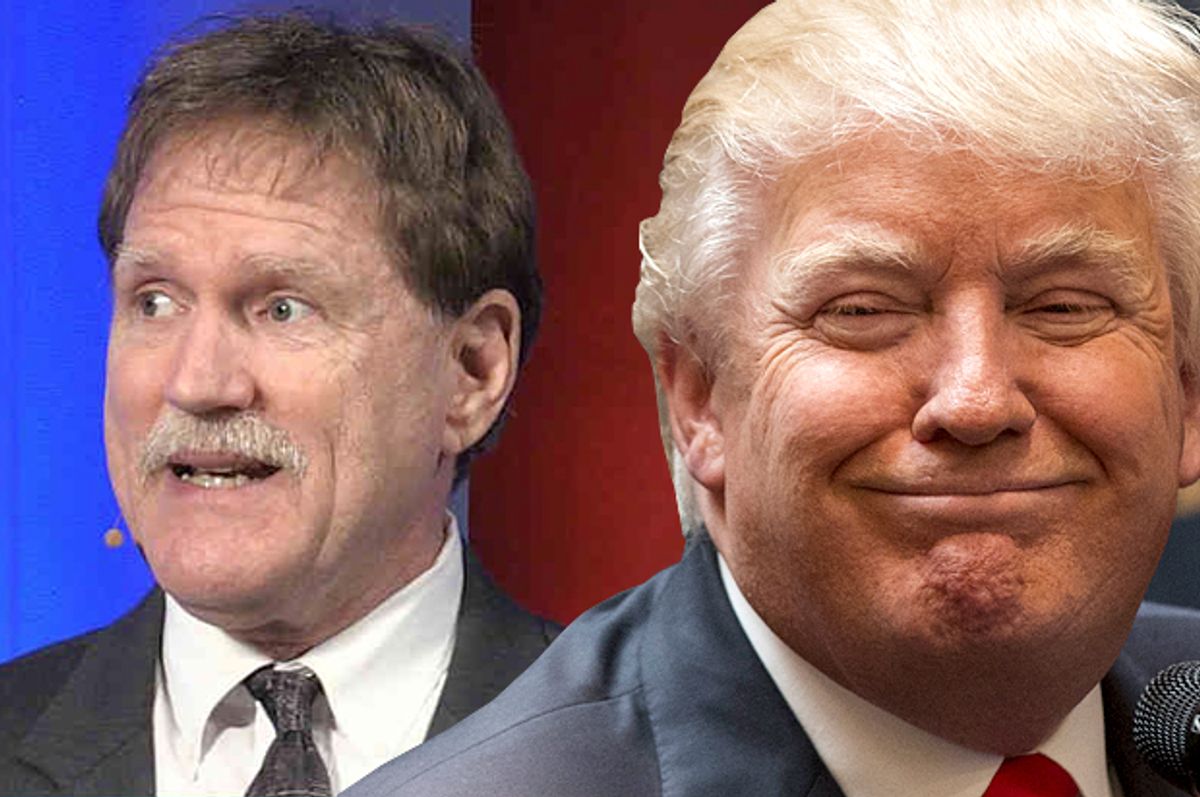 Having already secured the neo-fascist and white supremacist vote, Donald Trump is thrilled to be dipping his undoubtedly stubby toes into the conspiracy theorist cesspool with an endorsement from Carl Gallups, a Florida pastor, radio host and best-selling author, who has openly condemned same-sex marriage, accused President Obama of being a "Saudi-sponsored Muslim" operative, and called Sandy Hook a "hoax."

Gallups officially endorsed Trump on Jan. 13, one day before giving the opening convocation at the GOP frontrunner's rally in Pensacola, Florida. In a press release on his campaign website, Trump said it was his "great honor to receive endorsements" from Gallups and a number of other "prominent community leaders" — among them George Scarborough, brother of MSNBC's "Morning Joe" co-host Joe Scarborough.

The press release describes Gallups as "an author, radio and television talk show host and senior pastor of Hickory Hammock Baptist Church in Milton, FL." Milton is a small town in the Florida Panhandle with an estimated population of 9,445, according to most recent census data. His radio show "Freedom Friday" airs (you guessed it) every Friday on AM radio. He appears with some frequency on several shows I've never heard of and the "Jim Bakker Show," which I've heard of only in reference to the host's endorsement of survivalist food buckets:

But beyond a certain Evangelist niche, Gallups is a relative no-name. What makes this small-town conservative pastor interesting?

Well, for starters, Gallups is the proprietor of PNN, a self-described "News & Media Network" tirelessly devoted to "investigating" various conspiracy theories, especially if they concern Barack Obama's allegiance to Islam.

In a 2010 YouTube video titled "SHOCK INTELL! Is Barack Obama Really A Saudi / Muslim 'Plant' in the White House?" published on PNN's account, Gallups — narrating an ineptly DIY iMovie with text effects — points to video of Obama bowing to the now-deceased King Abdullah of Saudi Arabia as evidence of the president's Muslim origins. The PNN video only showed stills of Obama's "offense," but frequent pseudonymous guest Barry Soetoro (the monicker conspiracy theorists falsely alleged Obama used as an "international student" at Columbia University) posted on his website (which now ironically redirects to whitehouse.gov) video proof set to Tool's "The Pot":

Soetoro "blew the lid off the Sandy Hook hoax" in a 30-minute YouTube video alleging David and Francine Wheeler, the parents of one Sandy Hook victim, were actors employed by the Obama administration to advance gun control legislation. Gallups then brought Soetoro on to his radio show to plug the finding.

As a pastor, Gallups has also inserted himself into the religious discussion from time to time, mostly regarding homosexuality and same-sex marriage.

Last spring, at the White House Correspondents' dinner, Obama made light of former-Minnesota Congresswoman Michele Bachman's prediction that he would "bring about the biblical end of days," joking, "Now that's a legacy ... Lincoln, Washington, they didn't do that."

"Obama ... props up partial birth abortion, the destruction of the defense of marriage act, homosexual marriage and, what many believe to be, turning his back on and even threatening Israel and its leadership," Gallups told Christian news site WND in response to the President's joke. "Regardless of how uncomfortable Bachmann's comments might have made some feel, the biblical fact is that when a nation turns its back on Israel and at the same time celebrates, promotes, and legalizes homosexual marriage it is inviting end of days judgment upon itself."