For months, beltway writers have been trying to pin blame for Trump on Dems. The latest example is double absurd 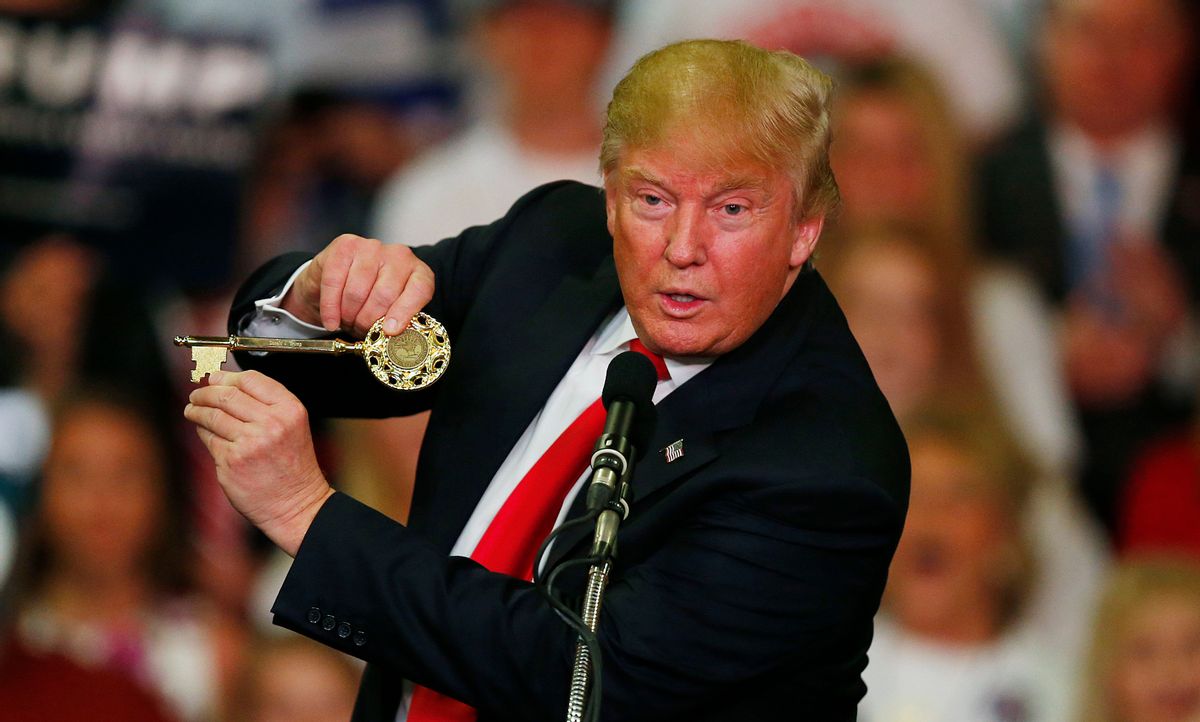 Republican presidential candidate Donald Trump holds up a key to the city he brought onto stage with him as he speaks at a campaign rally Monday, March 7, 2016, in Madison, Miss. (AP Photo/) (AP/Brynn Anderson)
--

The efforts of conservatives to blame anyone but themselves for Donald Trump’s success in the Republican primary long ago ceased having any connection to objective reality. Which is why it has been so much fun for liberals to watch as right-wing columnists fall all over themselves writing ever-more convoluted excuses for why everything is the fault of liberals/Democrats/President Obama/Mercury being in retrograde, or whatever else comes to mind.

The latest entry in the genre is this…thing from National Journal’s Josh Kraushaar, whose continued employment as a media pundit should really put to rest any lingering doubts that conservative outlets take any hiring qualifications into consideration beyond whether a person a) can reliably spout right-wing dogma, and b) has a pulse. Kraushaar’s column -- with the remarkable title, “How Al Franken Paved the Way for Donald Trump” -- is such a perfect pile of wrongness and desperation that you have to wonder if it was originally composed in crayon on the back of a cocktail napkin.

As suggested by the title, Kraushaar’s thesis is that had Al Franken lost his election for a Minnesota Senate seat (recall that Franken couldn’t take office until mid-2009 because the election was tied up in recounts and court challenges), President Obama would not have had that fabled supermajority that he used, in the popular formulation that conservatives are still using seven years later, to ram his unpopular healthcare reform law down the American people’s throats. Here is a passage from the column’s second paragraph:

Ima­gine that Sen­ate Demo­crats had only 59 votes in Decem­ber 2009 and needed to cor­ral at least one Re­pub­lic­an vote to pass Obama­care. But Pres­id­ent Obama didn’t face any real res­ist­ance in Con­gress to start his pres­id­ency, and that turned out to be a polit­ic­al curse be­cause he nev­er needed to work with the op­pos­i­tion bey­ond win­dow-dress­ing.

Obama not facing any “real resistance” from Congress at the start of his presidency will be news to any sentient human who was alive and watching the news in 2009. We know for a fact that congressional leaders met for dinner on the night of Obama’s inauguration on January 20, 2009, and agreed to a legislative strategy of maximum opposition, whereby they would say “no” to anything the president proposed and deny him any accomplishments.

Our evidence for this meeting is not theoretical. The people who were there have admitted to it. One would think a writer whose job for the last decade has been that of “political correspondent” might have been aware of this widely reported event.

Not acknowledging that the GOP strategy for working with Obama from day one was to in fact not work with Obama at all no matter how many compromises he offered (and he offered quite a few on the stimulus bill and the Affordable Care Act, for starters) pretty much makes the rest of this column null and void. But let’s look at a couple of more moments of head-slapping cluelessness, just for laughs:

He did. He let Democratic Senator Max Baucus spend so much time trying to hammer out a deal with moderate Republicans that his supporters were tearing their hair out begging for him to forget it and move forward. Again, this is all in the historical record.

The GOP would still have been op­posed to any Demo­crat­ic health care re­forms, but the an­ti­pathy would have been muted be­cause a few Re­pub­lic­ans would have sup­por­ted the le­gis­la­tion.

The fun thing about this sort of pronouncement, confidently delivered within the right-wing echo chamber, is that you don’t have to provide even a lick of evidence to back up this unprovable counterfactual.

Obama ac­ted against his polit­ic­al self-in­terest in push­ing Obama­care through Con­gress, but giv­en the di­vided gov­ern­ment that en­sued, it then made some sense for him to play to his base in his reelec­tion cam­paign and stick to his lib­er­al prin­ciples after win­ning.

Here we have a sentence that could only have been written by a Washington insider who has lost all perspective on what it is exactly we send elected leaders to the capital to do. It’s such a perfect example of the form that I want to preserve it in amber. It encapsulates everything wrong with horse-race political coverage.

It just does not seem to occur to Kraushaar that there could have been anything more important about passing the ACA than how it harmed Obama’s “political self-interest.” The 20 million people who have access to coverage now? The historically low rate of growth of medical costs? The good the law has done? The negatives that either could not be addressed in the original legislation or resulted from it in unforeseen ways, and which could perhaps be fixed if Republicans in Congress would give that a good-faith effort instead of passing doomed repeal after doomed repeal of the entire law? The fact that whether working on fixes and enhancements of Obamacare or tearing it up and starting all over trying to pass some sort of single-payer system has been one of the central points of disagreement between the two Democratic presidential candidates in 2016?

Pffft, who cares when Obama’s political self-interest was at stake? Granted, Kraushaar is a horse-race journalist and not a policy writer. But this sort of tunnel vision perpetuates the stereotype of the out-of-touch Beltway hack that has contributed to much of the press’s loss of legitimacy as a source of information about issues that affect its readers.

In fact, I’d dare say that this sort of lame ass-covering of the GOP establishment by acquiescent journalists has as much to do with the rise of Donald Trump as Obamacare did. To mangle an old saying, you can fool some of the people some of the time, but eventually even the most clueless suckers are going to notice.