Chuck Grassley wants it all: Greedy Senate GOPers are longing to block a SCOTUS nominee without paying any price for it 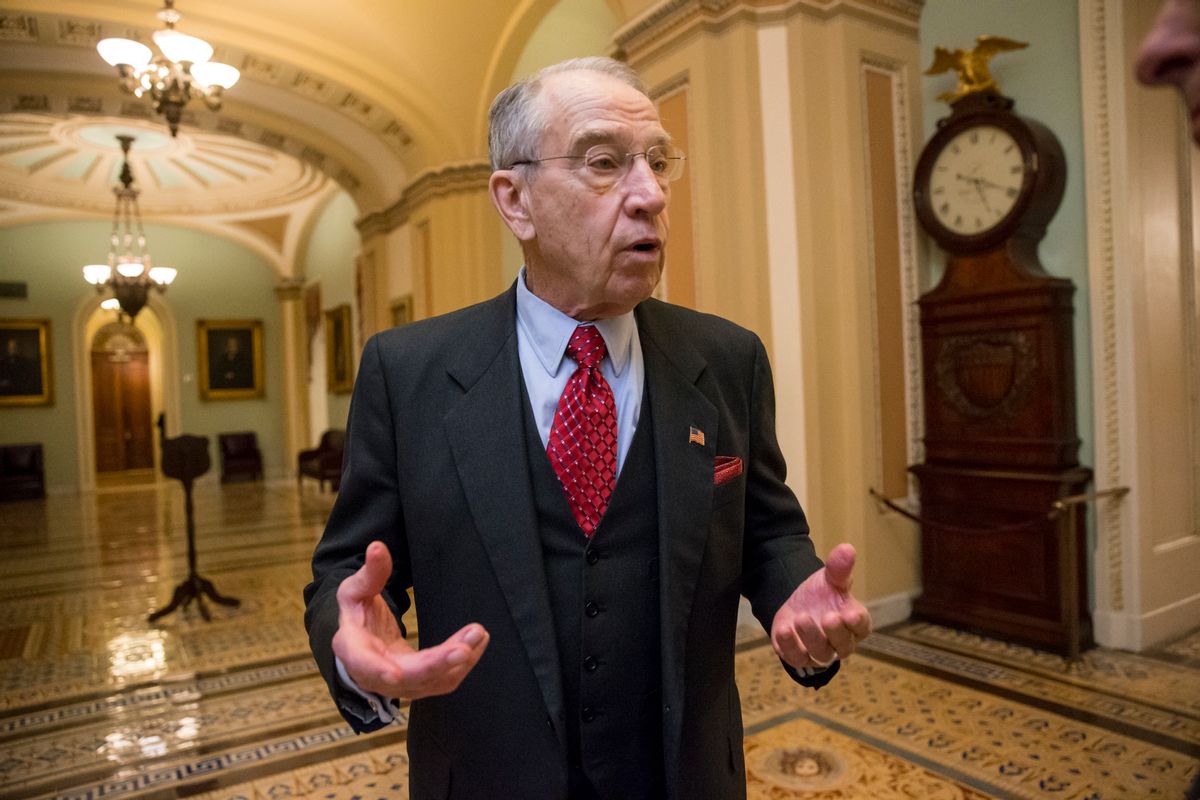 In this Feb. 10, 2016, photo, Senate Judiciary Committee Chairman Chuck Grassley, R-Iowa, speaks with reporters on Capitol Hill in Washington. Grassley has a major say on whether President Barack Obama's nominee to the Supreme Court even gets a hearing. In the past week, Grassley, who is seeking a seventh term, has delivered a muddled message about the fate of any pick. (AP Photo/J. Scott Applewhite) (AP)
--

The Senate Judiciary Committee met Thursday morning ostensibly to discuss various bills and nominations and other committee business, but the real purpose of the meeting was to allow committee members to bicker over the Supreme Court vacancy left by the recently departed Antonin Scalia. For the Republicans who control the committee, it was an opportunity to lay out a case justifying the GOP’s decision to adopt a posture of maximum obstruction – no votes, no hearings, and no meetings with whomever Obama selects to replace Scalia. They’ve determined that it’s in their best interests to put off the nomination until after Obama’s successor takes office, thereby keeping alive the possibility that a Republican president will restore the court’s 5-4 conservative majority.

Sen. Chuck Grassley, the committee chairman, reiterated in his opening remarks that there was absolutely no chance that any living human selected by President Obama would receive any consideration by Senate Republicans. And after stating firmly that the Republican obstruction would hold, he demanded that Democrats and the White House stop trying to make Republicans pay a political price for said obstruction. “Why the charade? Why all this outrage about a hearing? Why the demands for a hearing that everyone knows would never result in a confirmation?” Grassley asked. “It’s because the other side is committed to using this process to score as many political points as possible.”

Well, yes. That is what is happening. Well observed, Mr. Chairman.

We’re pretty deep into the bullshit here, so let’s try and sort this out. The Republicans in the Senate are fully committed to obstruction, and the reason why is that they think they stand a good shot of getting another conservative on the court. But that’s a tough argument to make politically, so instead they claim that in blocking a nomination for close to a year they’re standing on principle and precedent. The “principle” is “we like having power” and the precedent is one that they’ve literally just made up, but they’re nonetheless seizing the moral high ground and accusing the Democrats of playing politics.

Grassley wants to have it both ways – he wants to block the president’s nominee from getting a nomination hearing, and he’d like very much not to pay any political price for it. That’s not how it works, and by adopting a position of maximum obstruction, Grassley is inviting the politicization that he bemoans. The White House has every right – they would even say the responsibility – to put forward a nominee for the Supreme Court. And Democrats are well within their rights to demand that the nominee receive due consideration by the Senate. Not only that, the White House and the Democrats have the majority of the public on their side, according to recent polling. So why wouldn’t they put forward a nominee, demand hearings, and force the GOP to hold the line on obstructionism? They’re only able to “score political points,” as Grassley put it, because the Republicans have chosen to put themselves in a politically vulnerable position.

The obvious solution to Grassley’s concern would be to just let the hearings proceed, right? Well, not exactly. As it stands, the Republicans can keep this fight focused on Obama and keep their obstructionist arguments focused on this nonsense principle they’ve made up about not confirming justices in an election year. But once they let a nominee in the door, they will be forced to find real reasons to oppose the nominee – “because Obama nominated you” won’t cut the mustard. Republicans won’t admit to that, though, so they have to figure out some other reason for stopping the hearings process before it can begin, and Grassley came up with a novel one: he can’t hold hearings because he and his fellow Republicans will be too harsh on whoever Obama picks.

GRASSLEY: It’s even been suggested that if the White House selects a Judge from Iowa, then I’d try to convince my colleagues that it’s a good idea to hold hearings. We’ve been up front and clear, but in case there is any confusion over whether this obvious political ploy would work, let me be crystal clear: it won’t.

We’re not going to drop any nominee into that election-year “cauldron,” and I’m certainly not going to let it happen to an Iowan.

How very chivalrous of Chuck Grassley to shield the as-yet-unnamed nominee from the vile depredations of his own party’s attack machine. I will say, though, that shutting down the process out of fear that Republicans will maul the nominee is at least more honest than carping about "principle" and Democratic politicization.