Declaration of independence: Bernie’s Michigan surprise and the death of two-party politics

Can Sanders' massive upset change the race? Maybe not, but it exposes the terminal decay of two-party politics 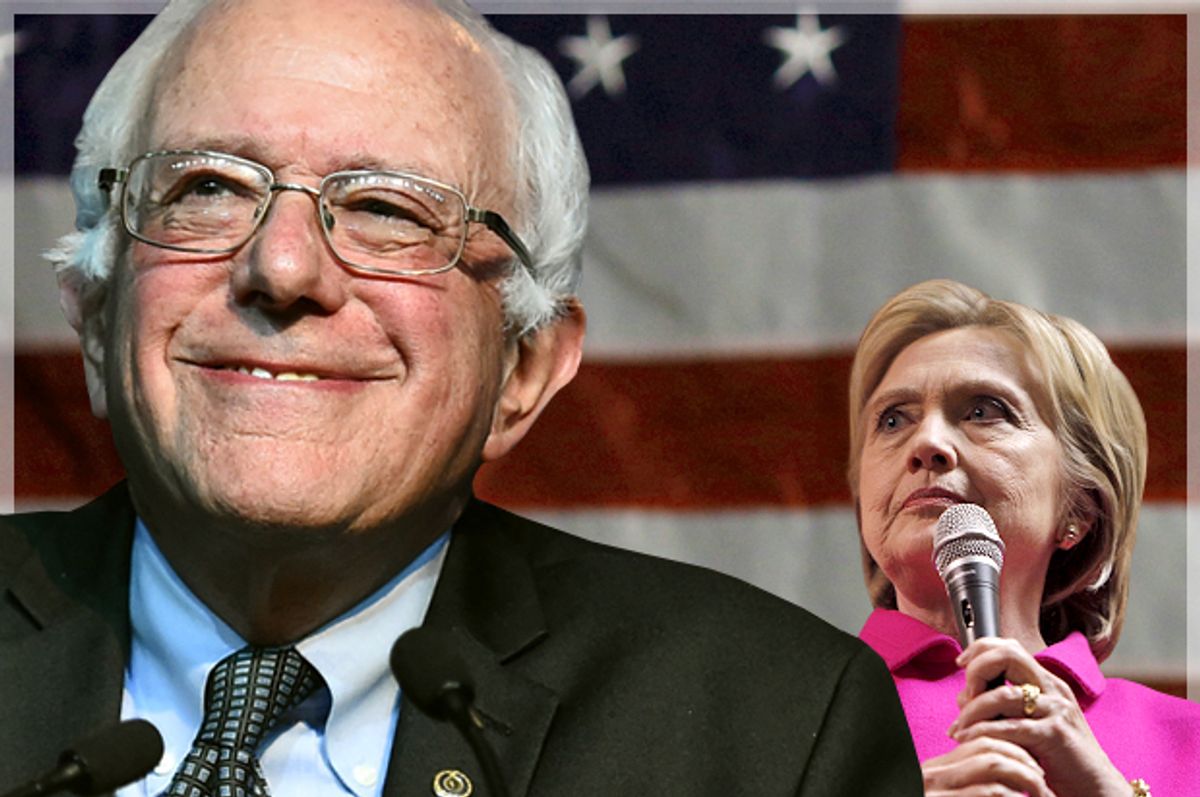 It’s like the old Irish drinking song “Finnegan’s Wake,” the one James Joyce made famous: Every time the Democratic Party tries to hold a wake for Bernie Sanders, the voters pour whiskey on him and he turns out not to be dead. Literally no one expected Sanders to win the Michigan primary this week. You didn’t and I didn’t, so let’s not front. Based on Sanders’ impromptu press conference in Miami late on Tuesday night, he didn’t either. No poll taken during this Michigan campaign had Hillary Clinton leading by fewer than five percentage points, and the most recent surveys suggested that she was cruising toward a decisive double-digit victory.

None of that has stopped the Clinton campaign and the Democratic political establishment from pretending that this was no huge surprise (which it was) and is no big deal (which it is). As usual, you can slice and dice the Michigan data to prove whatever point you want: Sanders did better among African-Americans than in any previous primary (although he only won about one-third of the black vote), and Clinton’s attempt to portray him as an enemy of organized labor and the auto-industry bailout may have backfired. My colleague Amanda Marcotte has advanced the argument that despite the Michigan surprise, Sanders’ weakness among voters of color and older women represents a potentially fatal Achilles' heel, since those groups are crucial to a Democratic victory in November.

I don’t entirely disagree with that, although it may be a case of ignoring the forest to focus on a few of the better-looking trees. I’m not doing Bernie Sanders campaign commercials here, and I have always seen him as a problematic and limited candidate. (As is his opponent, through a different prism.) But whether or not Sanders wins, he has captured a mood and a moment that Clinton and the forces of Democratic orthodoxy have been unable to suppress. Nothing expresses that more clearly than Sanders’ extraordinary margin among independent voters, who may vote in either party’s primary in Michigan. He won that group by 71 percent to 29 percent, a much larger advantage than Clinton enjoyed among African-Americans or older voters.

I’m sure you can find people on the Internet right now who are using that statistic to downplay Sanders’ Michigan victory: Well, Hillary won among real Democrats, am I right? It’s true that Sanders is less likely to do well in closed-primary states, and that throughout the campaign he has polled relatively poorly among the most loyal Democratic voters and constituencies. That might frame a compelling argument about why Sanders can’t or won’t win the nomination, but as an argument that Clinton should win it — well, what adjective would you prefer? Weak? Feeble? Desperate and depressing? If Hillary Clinton’s path to the Democratic nomination effectively requires shrinking the electorate and driving away newcomers and outsiders, that speaks volumes about her party’s dire predicament.

Independent voters have made up the largest proportion of the American electorate since roughly the beginning of the Obama presidency (a fact that may not be coincidental), and their numbers continue to swell. There are one-third more independents than registered Democrats, and almost twice as many independents as Republicans. This fact is the enormous gorilla in the room of American politics, which both parties are eager to ignore or explain away. The same is true for pollsters and political scientists, who tend to assume that most independents are “leaners” who reliably vote one way or the other, rather than people who are fundamentally dissatisfied with the bipartisan system.

It goes without saying that this unaffiliated bloc will be decisive in the general election this November, and in every presidential election into the indefinite future. In an attempt to lure these unhappy customers back in the store, both parties have opened their primaries to independents in many states. In a year when the law of unintended consequences has been in full effect, they probably wish they hadn’t. Sanders has already won five such states, and came close in Massachusetts. Several more lie just ahead, including Illinois, Missouri, Ohio and Wisconsin. On the Republican side, independents have overwhelmingly supported Donald Trump (although he also leads among Republicans, if much more narrowly). This unpredictable and uncontrollable force has laid bare the ideological and organizational weakness of both parties, and threatens to reduce the frayed system of electoral politics in this country to total chaos.

Media pundits and other forces of orthodoxy may be correct that Sanders’ shock victory in the Mitten State, which Harry Enten of FiveThirtyEight has called “one of the greatest upsets in modern political history,” does not alter the fundamental dynamics of the Democratic race. Clinton remains far ahead in the delegate count, and leads in recent polls in all the big states that will vote on March 15, a Super Tuesday III that features contests in Illinois, Missouri, Ohio, Florida and North Carolina. If she sweeps all those states, or wins four out of five, then normalcy is pretty much restored and Michigan was a nasty pothole on the road to the nomination rather than a signpost of electoral doom.

As you may have noticed, those last two sentences included phrases like “recent polls” and “delegate count” and an entire clause beginning with “if.” In this year of existential doubt, all such assumptions about what will happen (or what ought to happen) have led only to the abyss. After Michigan, Sanders’ campaign can now glimpse a slender thread of hope: If he survives the couple of weeks, the electoral map shifts back to a long list of states where he expects to do well, including Hawaii, Washington, Wisconsin, New York, Maryland and Pennsylvania. But as exciting as the horse-race narrative of 2016 has been so far, with more twists and turns yet to come, the underlying conflict embodied in the Clinton-Sanders race is more important than which of those deeply flawed candidates will end up as the Democratic nominee.

Both major parties are afflicted by a pervasive mood of denial and confusion, although it’s only beginning to surface among Democrats. It’s been obvious (and admittedly entertaining) for many months on the Republican side, as the party’s leaders and back-room financiers have discovered that their supposed electoral base hates their guts, doesn’t agree with them on the issues and has rejected all their preferred candidates. For the brain trust around GOP head Reince Priebus, it’s the metaphorical worst-case scenario, except not a metaphor: There is at least a 90 percent probability that the Republican nominee will either be an authoritarian billionaire who barely qualifies as a Republican and not at all as a “conservative,” or a genuine, dyed-in-the-wool conservative Republican who is more widely despised by his own party than anyone in recent political history.

The Democratic race lacks the same flavor of Kardashian-style grotesque and melodrama, which has definitely relegated it to No. 2 in the ratings. It’s notably short on “Sieg Heil” salutes, Ku Klux Klan controversies, discussions of penis size and gratuitous personal insults. Clinton and Sanders have gotten pretty testy of late, and that’s likely to get worse before it gets better. But they don’t appear to actively loathe each other, and there’s never been any question that whoever loses will ultimately endorse the winner.

As I suggested last weekend, the differences between Clinton and Sanders as symbolic or ideological currents are more meaningful than their differences in policy or personality. Both candidates want to expand healthcare, raise the minimum wage and make college more affordable. But they stand for different and in many ways opposing visions of American society, the American economy and American politics. I still think it's unlikely that Bernie Sanders will win the Democratic nomination, although it would be foolish to sound certain about that. But Sanders represents the possibility of a non-partisan or post-partisan politics that is clearly the future. (In fact, it may be the present.) Hillary Clinton stands for a political party, and a political system, that is dying.