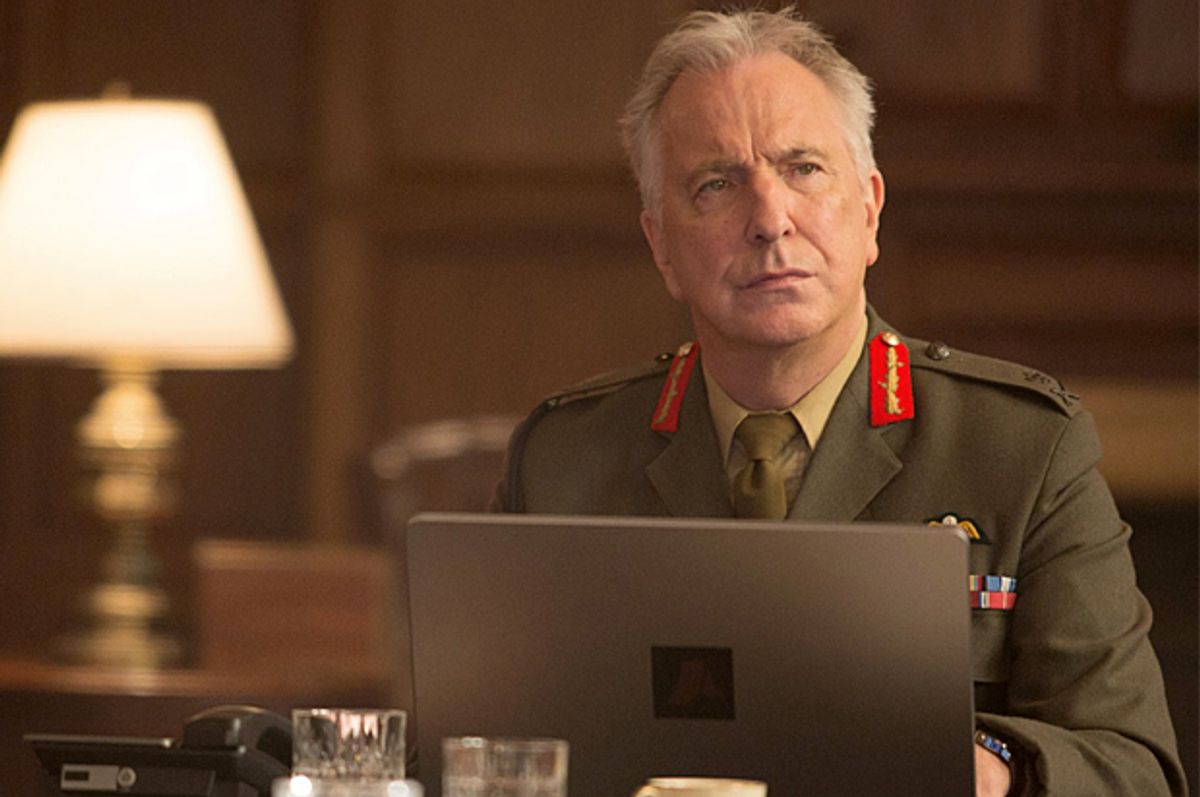 Alan Rickman in "Eye in the Sky" (Bleecker Street)
--

“Eye in the Sky” is a nifty British procedural in the tick-tock “Homeland” vein — you know, “10:20 AM, Jomo Kenyatta Airport, Nairobi, Kenya,” followed by “4:22 AM, Surrey, England” — that aspires to be the “Zero Dark Thirty” of the drone war. I’m sorry to dredge up that sore subject again, so let’s just say that I mean that as a mixed review but definitely not an insult. If the problem with “ZDT” (which I still think is a terrific film) was that its portrayal of Bush-era torture policy was so open-ended and ambiguous that it invited multiple interpretations, then “Eye in the Sky” is almost too neatly packaged. From its first scene, when director Gavin Hood shows us an adorable Somali immigrant girl playing with a hula-hoop in a Nairobi slum, you can hear the machinery of doom clanking ominously forward.

Still, Hood and veteran screenwriter Guy Hibbert deserve credit for facing some of the uglier moral contradictions of the drone war, in which people in dark rooms thousands of miles away can watch little girls playing in dirt backyards, or Islamic militants loading vests with explosives, and then dispatch them to the hereafter by pushing a button. It’s also noteworthy that the fictional drone strike at the heart of “Eye in the Sky” takes place in Kenya, a “friendly” country and a perceived ally in the “war on terror,” rather than in one of the six more disordered nations where the United States and its allies are known to have launched drone attacks. (Those would be Iraq, Afghanistan, Pakistan, Syria, Somalia and Yemen.)

As far as I can tell from a few minutes of digging around, there have been no known drone attacks by the Western powers inside Kenya. But it’s reasonable to assume that even activists who have devoted themselves to the issue don’t know the full extent of the drone war, and quite likely never will. There are quite a few strands connecting the scenario of “Eye in the Sky” to real-world people and events. The proposed target in this story is a Nairobi compound hosting a meeting of leaders from al-Shabab, a Somali militant group affiliated with al-Qaida that has conducted numerous violent attacks in East Africa. Among those people are two British subjects, one of them a white female convert, and an American citizen.

The fictional British woman is clearly modeled on the notorious Samantha Lewthwaite, an Islamic convert from Northern Ireland known to the London tabloids as the White Widow. Her first husband blew himself up in the 2005 terrorist bombings in London, and although Lewthwaite claimed to have been uninvolved in that attack she later moved to Africa under a false identity and reportedly married an al-Shabab leader. She avoided capture in Kenya numerous times and may now be in Syria training ISIS fighters. Her Wikipedia page describes her as “one of the Western world’s most wanted terrorism suspects,” which makes you wonder whether she wrote it herself. The American likely refers to Abu Mansoor al-Amriki, a former al-Shabab commander who was born in Alabama (of all unlikely places) and was apparently killed in 2013, not in a drone strike but during an internal power struggle that involved dueling YouTube videos and accusations about a “narcissistic pursuit of fame.” (As you can tell, researching this stuff is addictive.)

Hood, a South African whose previous films include “X-Men Origins: Wolverine” and the capable terror-war thriller “Rendition,” does a nice job threading together the immense web of political, legal and military decision-making behind the drone war. Helen Mirren and the late Alan Rickman (in his last major role) are the principals here, as a pair of senior British Army officers who’ve been tracking the al-Shabab team (and its British members in particular) for years. But they’re never in the same room: Mirren plays a colonel at a command center outside London, in direct control of the capture-or-kill mission, while Rickman, in full Severus Snape mode, is a silver-tongued general who’s holed up with senior British government officials in Whitehall, a few miles away.

Meanwhile, the “pilots” who actually control the unmanned aircraft that sits 2,000 meters above Nairobi are seven or eight time zones to the west, at a U.S. Air Force base in the Nevada desert. (Although it’s not customary for a British officer to have direct command over American service personnel, or vice versa, it can definitely happen.) Then there are the surveillance and intelligence experts at the U.S. naval base in Pearl Harbor, who are tasked with making positive identifications of the people inside that suburban Nairobi house. Several of those people, including the Lewthwaite-cognate, are believed to be on “kill lists” personally approved by both the British prime minister and the president of the United States. At least in theory, you’re supposed to avoid mistakes about these things.

All the political and interpersonal dynamics that inform the decision about whether to blow up this house and everybody in it, along with an unknown number of civilians who happen to be strolling past or selling goat meat and plastic buckets in the street, are rendered in dense, captivating and sometimes comical detail. At one point the British foreign secretary has to answer the phone while sitting on the toilet in Indonesia (he shouldn’t have eaten the prawns), while the American secretary of state is interrupted during a ping-pong tournament in Beijing. (His reaction is pretty much "Quit bothering me and start killing people.") Nobody in this story is rendered as a heartless monster, or is untroubled by the possible death of hula-hoop girl and others like her. Honestly, I’m not sure I believe that the people who launch drone strikes think about collateral damage this hard, or with this degree of moral intensity; there are simply too many of them. I hope I’m wrong, of course.

For the hardheaded military officers played by Mirren and Rickman, it’s an easy call. Mirren’s character has beloved doggies at home in the English countryside, and Rickman arrives at the meeting with his granddaughter’s birthday present in a shopping bag. (That’s admittedly a little much.) But the people in that Nairobi house are high-value targets with all kinds of impressive hardware on the premises, and bad things happen in war. If al-Shabab has another shopping-mall attack in mind, like the one that killed 67 people at Kenya’s Westgate mall in 2013, then hula-hoop girl can be viewed as expendable.

What’s missing, of course, is the larger context. I shouldn’t say “of course,” because almost nothing is obvious about a war we can’t see, and whose details are deliberately kept secret. From a tactical and military point of view, drone warfare has obvious advantages: There is little or no risk to the attacking forces and, at least in principle, civilian casualties are likely to be lower than in a conventional bombing campaign or ground-level warfare. But as the New York Times reported last year, the Obama administration has cloaked the drone campaign in ever more secrecy, despite repeated promises of greater openness. How many drone strikes have been launched by America and its allies against purported terrorist targets? And how many uninvolved civilians have been killed? The only possible answer to either question is that nobody knows; a low-end estimate would be 500 or so drone strikes and something like 1,000 civilian casualties.

Those numbers don’t sound alarming, as war statistics go. But beneath them lie a variety of deeper and unseen issues. The conscientious precision and painstaking identification in “Eye in the Sky” is presented as morally murky; Mirren’s character leans hard on a subordinate to give her an acceptable estimate of collateral damage, so the politicians will say yes. Even so it may be an overly reassuring picture. According to that Times story from last May, and a similar Guardian investigation a few months earlier, drone attacks overwhelmingly kill people who are not their intended targets, but who can plausibly be considered “militants” and hence are not regarded as collateral damage. Micah Zemko, a scholar at the Council of Foreign Relations, told the Times, “Most individuals killed [by drones] are not on a kill list, and the government does not know their names.”

All that is before we even consider what historical and political currents produced an outbreak of Islamic terrorism and anti-Western fervor in numerous different places, and whether a secret and sinister air war out of a Philip K. Dick novel is likely to improve matters. Do the CIA and MI6 and whoever the hell else really have little robotic beetles that can fly into your house and deliver high-def images to spy chieftains and government officials and bored Air Force officers riding a Red Bull high halfway around the world? I’m not sure I needed to know that. Hibbert and Hood and the team behind “Eye in the Sky” clearly feel what most of us feel about that stuff, which is that it's both alluring and dangerous. That’s a lot better than cheerleading, but it’s not quite enough to prevent their movie from sliding down the ideological slope toward inadvertent propaganda.