Donald Trump skates on debate night: GOP rivals are going easy on his awful policies for a reason 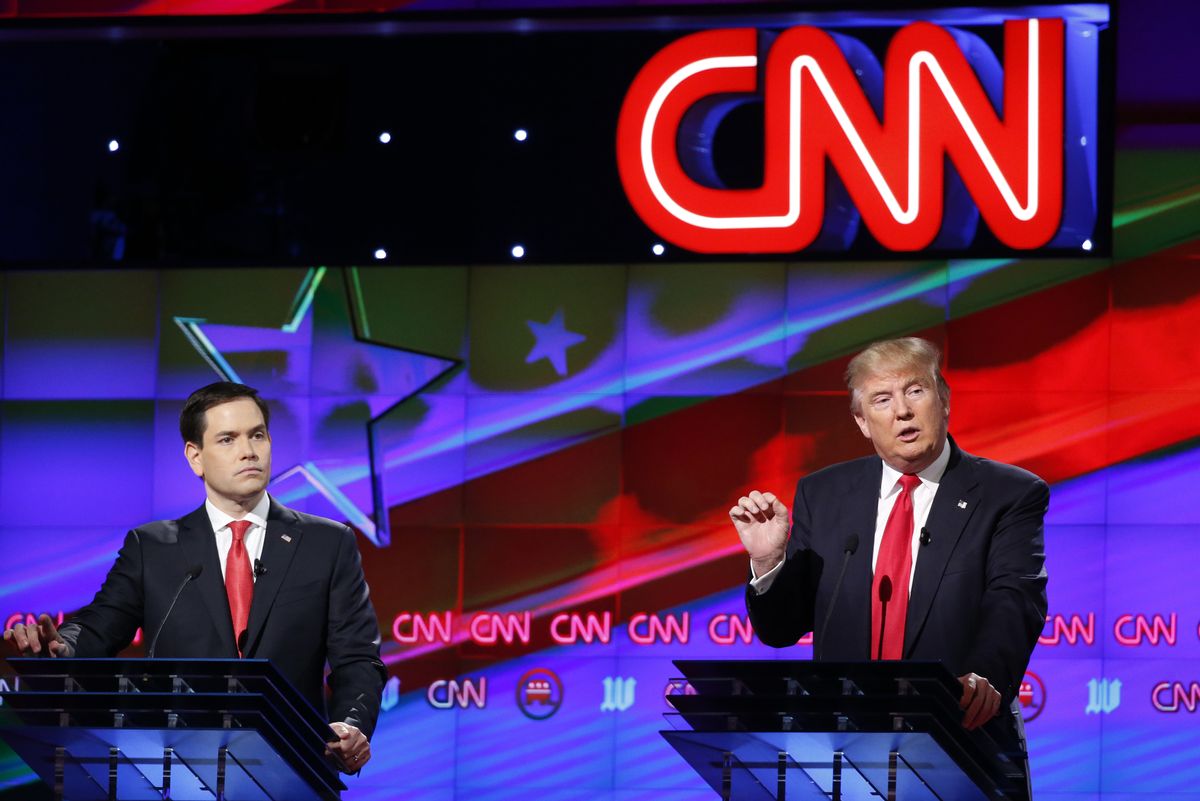 Thursday night’s Republican presidential debate must have been a frustrating slog for the hashtag activists of the #NeverTrump movement. If you still adhere to the notion that a bad debate performance can precipitate Trump’s collapse, then the Thursday debate represented the best, last chance to take him down before voting starts in several large, winner-take-all states in just a few days. Presented with that chance, every non-Trump candidate gave it a pass.

There were no childish insults, no attacks on Trump’s character, no condemnations of his scummy business ventures, and no denunciations of the percolating violence he seems to encourage at his campaign rallies. Instead we got a relatively sedate affair that focused mainly on policy differences between the candidates. If you were itching for someone to fly, teeth gnashing, for Trump’s jugular, you were left disappointed.

Oddly enough, what the Thursday debate did demonstrate was just how poorly equipped this year’s crop of Republican candidates were to attack Trump on policy grounds. One would think it wouldn’t be so difficult, given Trump’s obvious ignorance of policy matters and his inability to move beyond the five or six canned lines he throws out whenever a substantive question comes up. But, as I wrote Friday morning, the Republicans are in a bind because much of what Trump says aligns pretty well with their own rhetoric and policy agendas, and they can’t get too aggressive in attacking Trump’s lunatic posturing without undermining their own platforms.

Take, as an example, an uncharacteristically cordial disagreement Trump and Marco Rubio had at the debate over Social Security’s long-term financial health. Trump promised not to cut benefits for future retirees and he promised not to raise the retirement age, and he said he would pay for it all by eliminating “waste, fraud, and abuse” and doing something with foreign aid that will “bring the wealth back to our country.” Asked to respond to Trump’s plan, Rubio said his “numbers don’t add up” and we’d “still have hundreds of billions of dollars of deficit that you're going to have to make up.”

That’s as far as it got. And the reason Rubio can’t attack Trump harder on budget arithmetic is because his own plans for taxing and spending also don’t come anywhere close to adding up. Rubio doesn’t promise to protect Social Security the way Trump does, but the root problem facing both their economic agendas is that the centerpieces are massive and wildly irresponsible tax cuts that create yawning budget deficits in order to funnel wealth to the richest Americans. Rubio can’t offer himself as an effective contrast to Trump on spending because they’re proposing to do roughly the same amount of violence to the federal budget, so he has to limit his critiques to small-ball stuff and hope no one points out he’s a giant hypocrite.

This dynamic offers Trump a certain level of protection and relieves him of the need to bluff his way through policy details. But, as Greg Sargent writes, the free ride ends once Trump emerges as the Republican nominee. He won’t be facing an opponent who either tolerates or looks to emulate certain aspects of his worldview, and his extremism won’t be masked by opponents who more-or-less read from the same hymnal he does.

That gets to the core frustration of the #NeverTrump segment of the Republican Party. They are desperate for one of their own to take down Trump, even though their own candidates are handcuffed in that regard given how Trump has hijacked their policy positions. But if, say, Hillary Clinton were to win the Democratic nomination and go up against Trump, she’d be far more effective at tearing him down and exposing his policy ignorance than Marco Rubio or Ted Cruz ever could be. And that’s a cruel irony for the #NeverTrumps, given that most of them would rather self-deport than see Hillary Clinton in the White House.