Money and ground game alone can't explain Bernie Sanders' stunning win in Michigan. Could the '93 passage of NAFTA have played a role?

Since NAFTA took effect, under Bill Clinton, Michigan has lost thousands of jobs. No one has forgotten 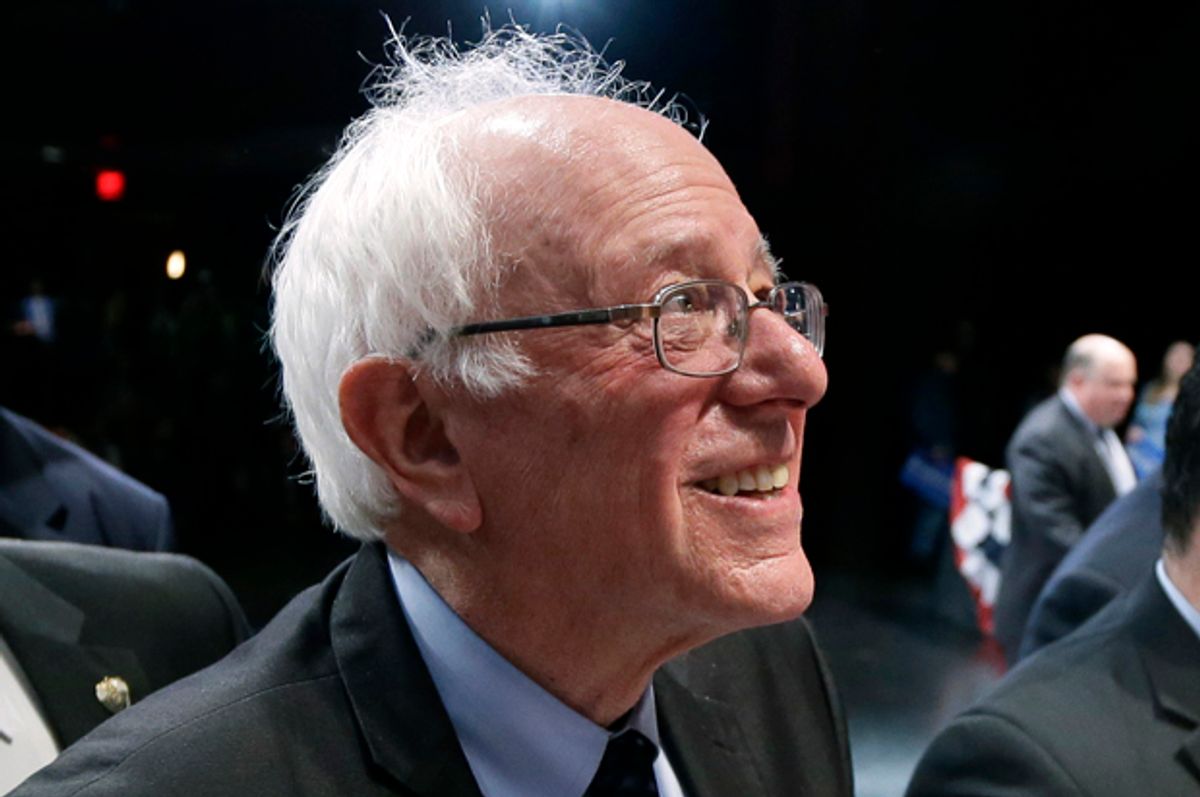 Opinion polling is an inexact science – but rarely so stupendously inexact as we’ve just seen in my home state of Michigan. Leading up to the Democratic primary on March 8, Hillary Clinton was ahead of Bernie Sanders by double digits – mostly high double digits – in every poll taken in 2016, which includes 17 tallies by seven different organizations.

When the actual votes were counted this past Tuesday, it was a different story. Sanders won a narrow victory, taking 49.8 percent of the statewide vote to Clinton’s 48.3 percent. Even with the small margin, it’s a large win, exceeding expectations for Sanders and registering his first win in a state with a significant African-American population.

The Vermont senator certainly didn’t look much like a winner during a CNN debate last Sunday night in Flint. During the course of two hours, he mansplained Clinton for interrupting him; suggested that only black people are poor or live in ghettos; offended the mental health community with a wisecrack about crazy Republicans; and got dinged by Clinton for not fully supporting a federal lifeline to Michigan’s essential auto industry.

For good measure, Sanders won praise for his debate performance the next morning – from the National Rifle Association, which appreciated his comments in defense of gun manufacturers.

Two days after annoying nearly every constituent group within the Democratic Party, Sanders (who is running as a Democrat for the first time in his long political career) proceeded to win a stunning upset in a high-profile Democratic primary.

Debates and the gotcha games that follow are delicious fun for those of us who read (and write for) Salon, but probably not as important to most regular voters. As to how the polling got so screwed up, Carl Bialik at FiveThirtyEight.com gives pollsters a chance to explain themselves, concluding that the data failure in Michigan was “an outlier, a perfectly rotten combination of bad luck and bad timing.”

Which doesn’t answer the question: How come Bernie won Michigan?

Looking at so many polls that showed their candidate winning by large margins, Team Clinton likely underinvested in the state. According to the Michigan Campaign Finance Network, which tracks campaign spending, Sanders actually outspent Clinton by nearly a million dollars on television ads. The Sanders camp, reports veteran Michigan blogger Chris Savage, also had a superior voter turnout operation.

Money is nice when you’re running for office, and so is a good ground game. But message also matters. And it’s no surprise that Sanders’ full-throated populism connected so well with voters in a state where high economic anxiety has become an unpleasant fact of life.

An important thread of this story starts a long time ago, in a galaxy far away. In 1993, the first year of the first Clinton presidency, economist Jeff Faux sent a memo to senior administration staffers, which found its way to the pages of Harper’s magazine.

Bill Clinton’s push for NAFTA, Faux argued, “is clearly a political loser, big time,” that could hurt the president’s chances for reelection in 1996. If it passes, he wrote, "Bill Clinton will be blamed for every factory that closes down, whether NAFTA was the cause or not."

Faux was off by about 20 years and exactly one chromosome. In 2016, it is Hillary Clinton who is paying the price for her husband's hearty embrace of a bipartisan "free trade" agenda. NAFTA -- and the lesser-known but even more damaging Clinton initiative to "normalize" trade relations with China --- made it easier for capital and goods (but not people) to cross international borders. The result has been a social and economic disaster.

Since January 1994, when NAFTA took effect, Michigan has lost more than 230,000 manufacturing jobs. Once upon a time, thanks largely to union organizing and negotiated contracts, this was a state with wages higher than the national average. But income for Michigan workers has been dropping steadily. We dipped under the national average in 2005, according to the Bureau of Labor Statistics, and average wages here are now about $50 per week lower than the rest of the country.

Is all of that job and income loss due to NAFTA, China’s entry into the World Trade Organization and other dodgy trade deals? No, but a lot of it is. More important, many people believe that “free” trade has cost them a bundle – just as Faux predicted back in 1993.

According to CNN exit polls from Michigan, a healthy 57 percent of Democratic voters agree that “trade takes away U.S. jobs.” Sanders won 56 percent of those voters. A good chunk of his TV budget here, by the way, was placed on a 30-second TV spot touting his long-standing opposition to “trade deals that ship Michigan jobs overseas.”

Clinton, by contrast, won a majority among the much smaller 30 percent of voters who agree that trade “creates U.S. jobs.” That 30 percent figure is pretty anemic, considering how often we’ve been told by politicians of both parties and all manner of “serious” thinkers that we cannot afford the slightest interruption of the current corporate-friendly trade regime.

Clinton is well aware that she can’t navigate the Democratic primaries as an unrepentant free trader. Now that she’s no longer in Obama’s Cabinet, she’s come out against the most recent global trade pact, a 12-nation whopper called the Trans-Pacific Partnership (TPP). In the aftermath of her defeat in Michigan, the New York Times reports on Thursday's front page that she will be “recalibrating her message” on jobs and trade.

Clinton’s repositioning will have to be especially adroit to overcome both her recent – and ancient – history. While secretary of state, she described the TPP as “the gold standard in trade agreements.” And in language that precisely recalls Faux’s long-ago warning, Politico's Glenn Thrush referred to the former first lady this week as “the wife of President NAFTA.” Michigan voters, he observed, weren’t buying that Clinton had “more credibility on free trade than a guy who walks, talks and barks like a UAW organizer.”

The angst that workers feel about being treated like discardable pieces in a game of global monopoly, meanwhile, is bipartisan – or perhaps, post-partisan. Investigating the appeal of Donald Trump by actually watching his speeches, Thomas Frank discovered that the erratic, boorish billionaire “spent a good part of this time talking about an entirely legitimate issue, one that could even be called left-wing”:

It seems to obsess him: The destructive free trade deals our leaders have made, the many companies that have moved their production facilities to other lands, the phone calls he will make to those companies’ CEOs in order to threaten them with steep tariffs unless they move back to the U.S.

Frank thinks it’s too easy to write off Trump supporters as bigots attracted to his direct, vulgar appeals to racial resentment (as opposed to the dog-whistle versions long preferred by GOP candidates). There is some merit, it turns out, in addressing voters not as dogs, but as real people with real economic concerns. “When people talk to white, working class Trump supporters,” he writes, “what they find is that what most concerns these people is the economy and their place in it.”

Substitute “Sanders” for “Trump” and you could write the same sentence about the results of this week’s Michigan primary. (This should go without saying, but I better say it: There is no moral equivalence whatsoever between Sanders’ humane, graceful appeal for an economy rooted in broad-based prosperity and Trump’s much darker, testosterone-fueled vision, which demands taking back from “them” – whoever “they” are -- what rightfully belongs to “us.”)

Republican elites are in a full-on panic about the prospect of Trump as their nominee, fearing he will lead them into an electoral wilderness. If Sanders scores a few more upset victories, we can expect news about a similar panic setting in among the higher echelons of the Democratic Party.

What neither group of big shots seems to fully grasp is that the one and only issue both parties routinely cooperate on – trading away American jobs – has already caused full on panic among citizens who have been living in an economic wilderness for years. I’m pretty sure nobody in the White House paid much attention to Jeff Faux’s memo back in 1993 (which must be how it wound up in Harper’s). Anybody who wants to win this year’s election should start reading it now.

Roger Kerson is a Michigan-based media consultant for labor, environmental and nonprofit organizations.