After the latest debacle, we agree with Donald Trump: “We’ve had enough of the debates” 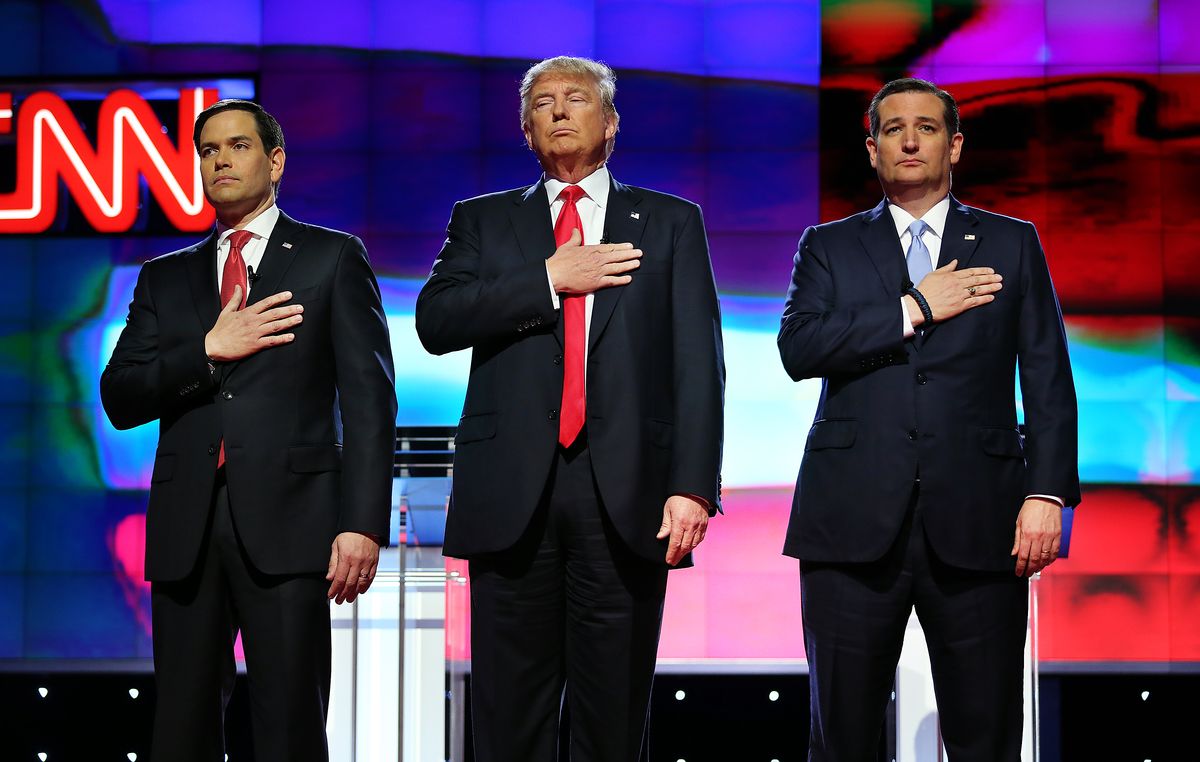 If you’re not a masochist — or even if you are, but you’re just not into politics — you may not know that there was yet another presidential debate Thursday night, this time the Republicans, and it was as exhausting a combination of atavism and decadence as ever.

It was hosted by CNN, and the presentation was so bombastically stupid that it was almost condescending. The moderation wasn’t great; it took far too long to bring up the violence recently perpetrated against journalists and protesters by Trump supporters — and, shit you not, the Trump campaign itself. And absolutely nothing happened that’s likely to change an outcome which, much like death, seems more inevitable every day.

But listen: You don’t want to hear about the entire debate. You either chose to do something else — or worse still, you watched it for yourself. And as the current patriarch of the heirs of Drumpf said himself Thursday night, “we’ve had enough of the debates” already. So I’m going to spare you a play-by-play. And I’m definitely not going to tell you who “won,” because, really, why the hell do journalists try to do that?

Here’s what I’ll do instead. I’m going to focus on the one part of the debate that, in the grand scheme of things, as best I can tell — which, to be clear, is very little — matters the most. It was early, and it was ugly, and it was exactly the kind of exhibition of political cynicism and religious bigotry that President Obama calls “the source of a lot of destructive acts.” I’m talking about the “debate” over what Donald Trump said about Muslims (all 1.6 billion of ‘em) Wednesday night.

The quote, for those of you who were lucky enough to miss that, too:

Needless to say, when a genuflecting Anderson Cooper (CNN again!) offered Trump a chance to at least say he was only referring to those who believed in a “radical” interpretation of Islam — which is still problematic for someone who wants to be president, but whatever — the Donald declined. “It’s very hard to separate” radicals from the nearly 1.6 billion others, he answered.

Anyway, that was the topic on Thursday night. But when CNN tossed another softball in Trump’s direction and gave him another chance to walk it back (are we going to ask him every single day now?), Trump didn’t just reject the offer. He went from arguing that it was difficult to tell the difference between a violent jihadist and an 8-year-old child to arguing that “a lot of them” are full of “tremendous hatred”:

I will tell you there's something going on that maybe you don't know about, maybe a lot of other people don't know about, but there's tremendous hatred … And I will stick with exactly what I said to Anderson Cooper. I like to solve problems. We have a serious, serious problem of hate … We have large portions of a group of people — Islam — large portions want to use very, very harsh means.

In response, Little Marco offered a tepid critique, saying that Trump didn’t get that “presidents can't just say anything they want.” Rubio added that he wasn’t “interested in being politically correct,” but that there were pragmatic reasons not to dehumanize 1.6 billion people. That’s better, I guess; but as the Intercept’s Murtaza Hussain tweeted:

Why was this the most important moment of the debate? Because this wasn’t just about Trump, though he certainly was the driver. It was about the entire Republican Party, and about the millions of Americans who continue to support it. All over the country — and all over the world — people are watching. There are millions of people whose perception of the United States is not set in stone just yet.

And this is the country we show them. I can’t blame them if they choose to turn away.