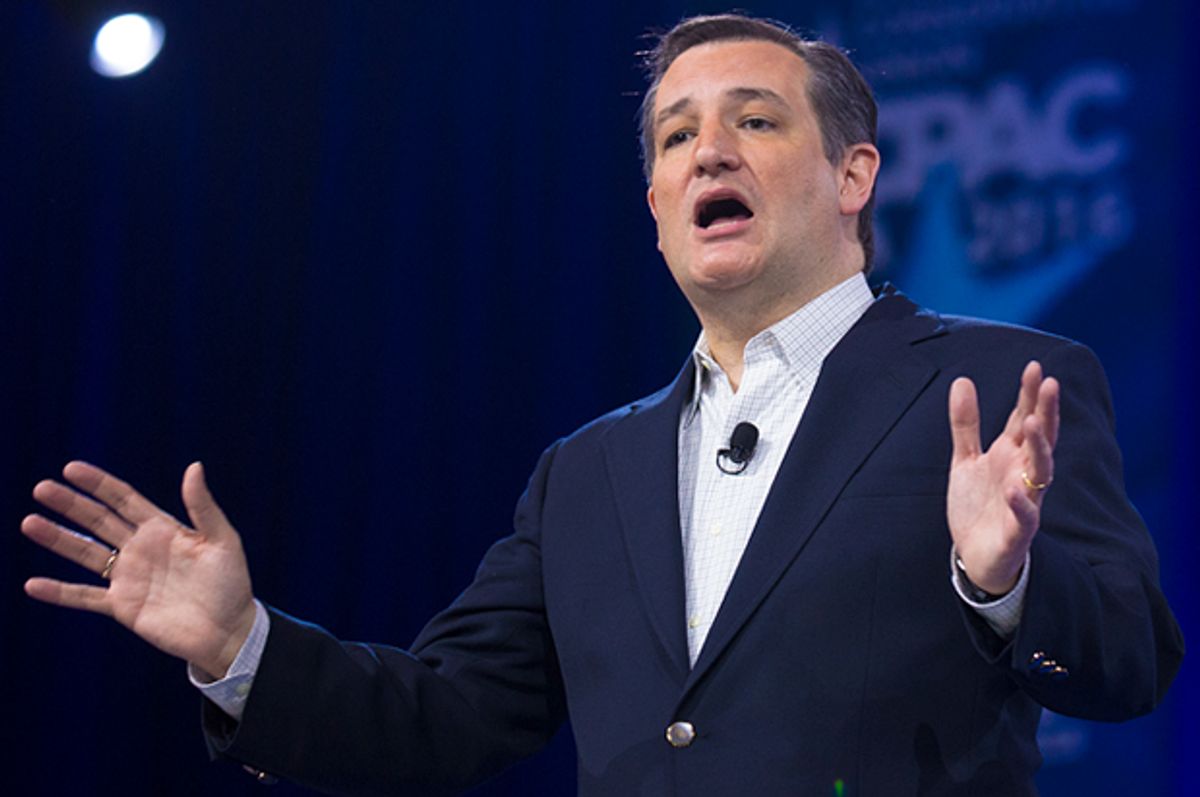 Once a year, thousands of conservatives from around the world make the pilgrimage to a hotel and convention center just outside of Washington, D.C., for the annual Conservative Political Action Conference, better known as CPAC. As if it were a mandatory religious obligation, everyone from members of the growing extreme far right to dying "moderate" Reagan Republicans take the journey. It's the place where the right wing of America plots its future.

But the conference has not always succeeded in building up the conservative movement. In 2009, a 13-year-old conservative wunderkind named Jonathan Krohn gave a much-hyped speech at CPAC -- only to later come out as a liberal. In 2013, a minority-outreach panel at the conference went viral, when it descended into a debate about the merits of slavery.

After years of following CPAC from the safety of my home, this year I decided to head down to the Gaylord National Resort and Conference Center in National Harbor, Maryland, and enter the belly of the beast myself. After all, this is a moment when the Republican Party, and in many ways the conservative movement itself, is self-destructing before our very eyes. I had to be there to see it.

So I applied for a press pass to cover the conference; although to be quite honest, I was doubtful they were even going to give me a second thought before dumping my application in the trashcan. Not only have I spent more than half a decade working for progressive media organizations; even a cursory Google search would reveal that I am an outspoken leftist on the Internet. Put another way: I am not just Feeling The Bern — there’s already visible scar tissue.

So you can imagine my surprise when, just days after hitting “send” on my application, I was confirmed. I was going to CPAC.

Here are some of my takeaways:

Maybe it’s because I’m a dirty socialist punk with “New York Values,” my experience with conservatives is usually split into one of two strains, the first being the oddball family member, who honestly isn’t all that right-wing, and the second being the politicians and pundits you regularly encounter over the airwaves. Given that first group of people, I guess it shouldn’t be all that surprising to find that not only were the majority of CPAC attendees nice people; it was actually a bit of a shock to discover that, aside from their cheers at the ubiquitous “All Lives Matter” slogan, I really sincerely liked many of them.

The CPAC attendees I spoke to, from the old red-haired woman from Houston to the pizza-faced millennial jonesing for a job on Capitol Hill, were all remarkably down to earth.They laughed at themselves. They mocked their own party. They threw shade at the conservative movement!

Obviously there were some exceptions, but the caricature many of us have of the typical Sarah Palin wing-nut was not the norm there. Most Republican politicians and right-wing pundits at CPAC are happy to speak with you and even snap selfies. For all their complaints that the liberal media paints conservatives in a bad light, they make the event pretty darn accessible, even to the actual liberal media.

When it came to the candidates running for president, CPAC 2016 was clearly Ted Cruz country. In fact, the next most favorite after Cruz was a guy mostly reviled by the conservatives in attendance: Donald Trump.

Those who hated both Cruz and Trump said they were considering Marco Rubio, but almost always added the caveat that they were actually “undecided.” They couldn’t even bring themselves to say they supported the one-time establishment doyen.

The other guy still in the race, Ohio Gov. John Kasich, was a joke, or even nonexistent, to most of those in attendance. One Scott Walker fan went on and on about how he always supports the presidential candidates with gubernatorial experience. Then he lamented that sadly there were no governors left in the running.

(3) The conservative movement is terrified about its future

The other major theme at CPAC was the need for the Republican Party, and the conservative movement as a whole, to reach out to millennials. Every other special session or panel was about young voters and what the party could do to stop the government’s and public education’s influence from turning these impressionable young minds into lily-livered liberals. But the weird thing is, from a scan of the conference floor you wouldn’t have been able to tell the right had a youth problem at all.

Everywhere you turn at CPAC, you’ll find a gaggle of young Ben Shapiro lookalikes. Young conservatives made up a rather large percentage of attendees, which was explained to me by a fiscal conservative in attendance: students are offered subsidized tickets, essentially paid for by people like him who dish out the big bucks for their higher priced general-admission pass. Turns out conservatives have embraced their own form of progressive taxation and public subsidies for the greater good!

There was actually a hint of creeping progressivism at this year's CPAC; and, oddly enough, it seems Donald Trump was responsible. It turns out the GOP frontrunner is actually, in some ways, pushing the Republican Party to the left.

As mentioned before, Ted Cruz was the clear CPAC favorite (even winning the CPAC straw poll), but it was the moderates in attendance -- yes, the moderates -- who stood with Donald Trump. I’m not talking about LGBT issues that are clearly no longer really an issue to a growing number of young conservatives. I’m talking about issues that were previously unequivocal conservative “musts.” I’m talking about the surprising number of CPAC attendees who were not only not bothered by Donald Trump’s views on Planned Parenthood (recall that he's praised much of the work that the organization does, even as he calls for its defunding) -- they actually agreed with him that Planned Parenthood did some good.

In truth, many of those in attendance seemed drawn to Donald Trump for one of the same reasons I like Bernie Sanders: because he’s free from corporate influence and can’t be bought.

And even the Ted Cruz supporters -- who could’ve gone on until CPAC 2017 laying out why they despise Donald Trump -- still defended the real estate mogul from Mitt Romney’s recent denunciations, dismissing the former GOP nominee as an establishment loser, and reasoning that at least Cruz and Trump share the bond of being anti-establishment.

(5) Conservatives are ready for their close-up, Mr. DeMille

Now, remember, the sample size of conservatives at CPAC is relatively small. It consists of those who can afford to attend. And it’s not a cheap event! But for some, it’s a business networking opportunity that they can’t afford to miss.

At a panel called “The Entertainment Gap: How Conservatives Can Win Back the Culture Through Books & Engagement in the Arts,” attendees begged "Clueless" actress-turned-Fox-News-pundit Stacey Dash to share as much as she could about breaking into the entertainment industry. No longer do these conservatives hate the liberal Hollywood machine; now they desperately want to be a cog in it. They salivated over her every word in hopes that they too could one day be a D-list movie talent, without having to abandon their right-wing ideology.

“Where’s our Jon Stewart?” asked one attendee of the panel. Conservatives are not funny, and the CPAC attendees, at least the ones in the room, were surprisingly aware of that and ready to admit it.

Attendees’ self -awareness was still lacking in some areas. For example, at the same Stacey Dash panel, audience members pried any information they could get out of a representative from book publisher Regnery Publishing. When conservative books fail, I learned at one breakout session there, it’s probably not because the book sucks; it’s because the system is stacked against conservative books and won't put them on the shelves. (Uh huh.) Even more remarkably, the fault does not, apparently, lie with the rich corporate bigwigs who run the major book chains. In true conservative fashion, attendees blamed the retail workers barely making a living wage for putting Bill O’Reilly’s latest tome in the “Humor” section.

All in all, I had a fantastic time at CPAC, even sticking out like a sore thumb. It was an education I won't soon forget.