Trump would be as bad as Bush: A commander-in-chief who respects the military does not order soldiers to commit war crimes

Soldiers follow orders, legal or not. I know, because I had to make those same calls in Iraq 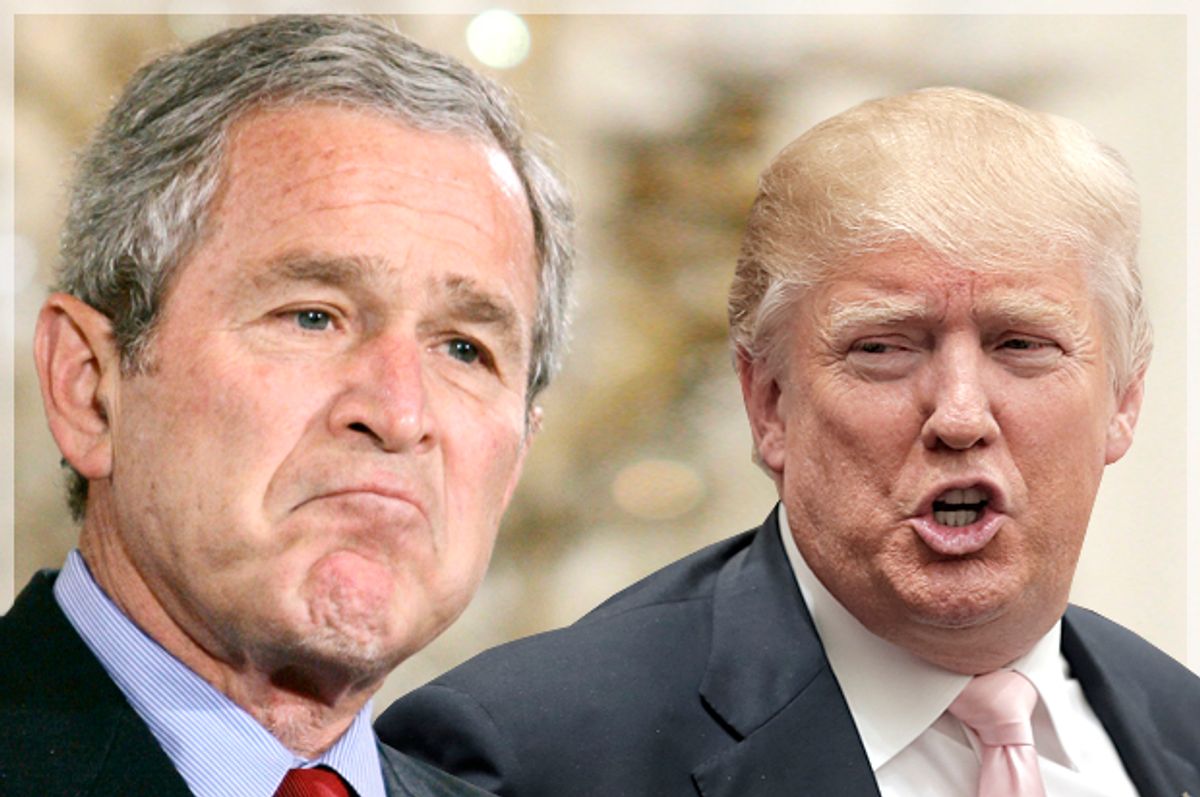 Candidate Trump says soldiers would obey his illegal orders. Many defenders of the Armed Forces find this offensive. They point to the work of Colonel Andrew Milburn, who argues that a code of ethics grants the soldier “a moral autonomy and obligates him to disobey an order he deems immoral.”

I am no longer a soldier. But I was one once. When I was a soldier, I broke into people’s houses. I destroyed their belongings. I handed off prisoners to Iraqi Army personnel who I knew did not follow the Geneva Conventions. I fought for an Army that was waterboarding prisoners in hidden bases around me. I fought in a country that had been invaded on specious pretexts. I fought for a country that still has untried prisoners off the coast of Cuba.

I am not alone. Many more were with me. Many fought well. Many were fine women and men. Still, despite this, I can think of very few who reveled in their “moral autonomy.”

It was a war. We were trying to win.

Soldiers follow orders. That’s what soldiers do. They are paid to do what they are told to do. If anyone has been paying any attention over the last 15 years (or 3,000 years), they know this. It stands to reason that if I followed one president’s illegal orders, I would be just fine following President Trump’s as well.

Life is not a Tom Cruise movie. Life is the 18 million Wehrmacht soldiers who did what they were told.

“A commander in chief who truly respects the troops and looks out for them does not order them to commit war crimes, setting off a constitutional crisis and subjecting American service personnel to court marshal and criminal prosecution. His attitude — I say it, so they will follow — is the thinking of a thug, a proto-fascist and a narcissistic personality. No party can tolerate such a figure, one who is overtly declaring he will not follow the rule of law. No thinking Republican in good conscience can defend such a person.”

She’s right. A commander in chief who truly respects and looks out for soldiers does not order them to commit war crimes. He changes the rules so he does not get blamed for the crimes and then punishes lower-ranking soldiers for doing what he told them to do. He tells the public one thing about the war while he does another. He sends people off to fight in one country and forgets about the ones fighting in other countries. He shortchanges the institution created to care for those soldiers.

Over the last 20 years, the laws keep on changing to help the people who change the laws. Someone was bound to come along and follow this logic to its necessary conclusion. Trump happens to be this person.

If you twist logic long enough, it’s going to break. You just needed a man big (or stupid) enough to break it.

Soldiers make democracy possible. They fight for it across the globe. They have done great things for it. But a soldier—and I think most soldiers would agree with this—is only as good as the people who give the orders. If a democratic society elects people who do not really respect the rule of law, who see soldiers only as units to be expended on the battlefield, who have dances and fundraisers for them instead of actually fighting with or for them, soldiers will not respect the rule of law.

More than this, they will cease to respect themselves. The last 15 years have decimated our military. Soldiers are still trying to figure out what it is they went to Iraq for, what they did in Afghanistan. Suicides persist. Men we sent to war and taught to kill sit on Death Row.

The wounds of war do not go away. They cannot be escaped through an appeal to “moral autonomy.”

God knows what President Trump would do to our military (people say it can’t get worse—it can; it can always get worse). But Trump’s right about this: soldiers will do what the president tells them to do. This is not brilliance on Trump’s part, not by any means. It is simply watching his own superiors, the people who made him rich, the establishment and media he pretends to loathe, and opportunistically following through on their logic. It is simply seeing that his leaders have no respect for soldiers and rule of law and acting on this by having no respect for soldiers and rule of law.

Trump is neo-conservatism’s inevitable coda—the necessary culmination of policies and decisions made during our most recent martial adventures, which will not go away just because we wish it.

Trump is entertaining in this respect. I myself cannot help chuckling as our foreign policy experts struggle to find a response to Trump’s ramblings. We can laugh all we want, but, in the end, for those who were soldiers, who know soldiers, or who are soldiers, this laughter won’t be so loud come next January. Soldiers will do what they are told. We know they will do it well. The question is this: What do we, the people of this democratic country, want them to do?

Michael Carson deployed to Iraq in 2006. He now writes for and co-edits the Wrath-Bearing Tree, a blog about war, history and the arts. Follow him @WrathBT.