Behind the music on "Vinyl": The New York Dolls & Lou Reed take the stage, and Pink Floyd abandons the cardinal rule of album cover art

In Episode 5 of HBO's '70s music miniseries, we get to hear Big Star's "Thirteen" -- but it feels all wrong 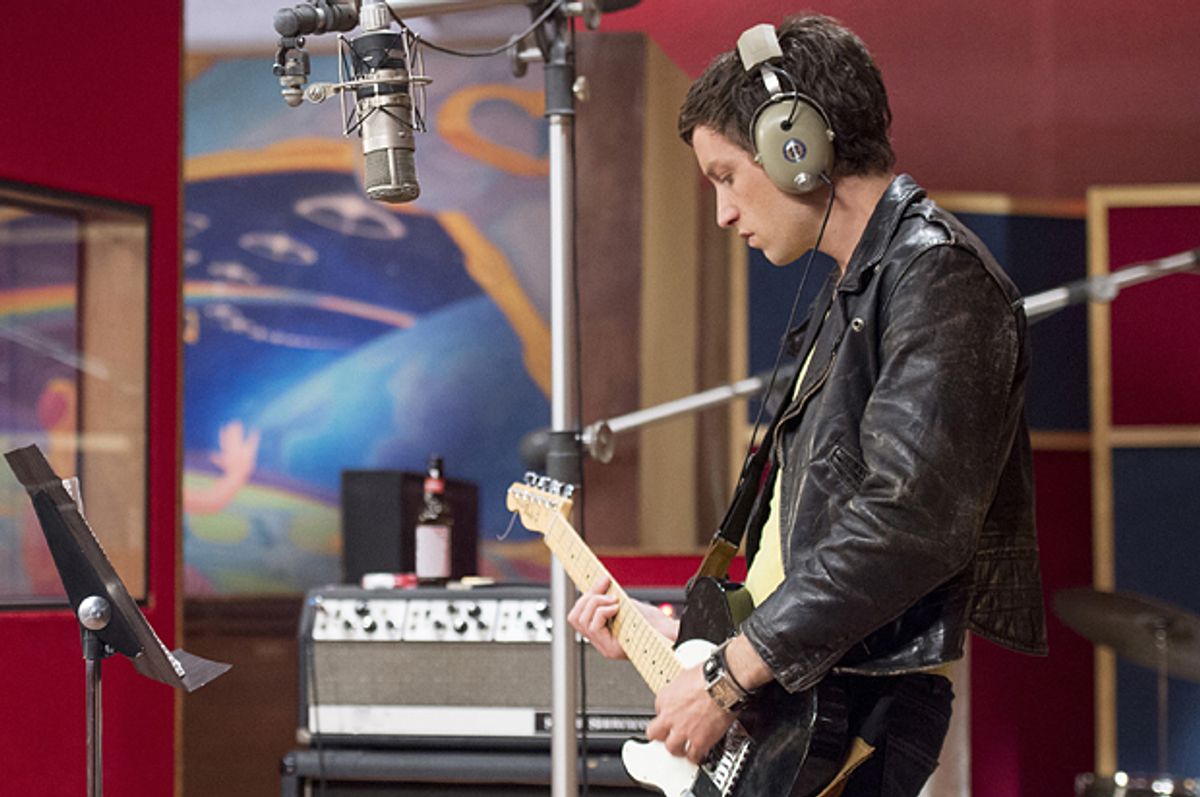 Kip (James Jagger) from the Bits is summoned to American Century for a strategy meeting. There, Richie Finestra (Bobby Cannavale) and Zak (Ray Romano) lay out their strategy for a promotional tour of FM radio, listing the great FM flagship stations of the past: WMMS in Cleveland, KSAN in San Francisco, and in New York: “You gotta call into Scottso,” Zak says, referencing the nickname of the late Scott Muni, program director of WNEW. Lester Grimes (Ato Essandoh) asks about WPLJ; Zak explains they won’t touch them until they break. Kip doesn’t want any part of this, or anything else, and Richie has to lay it on the line: “This is what happens when a label picks you up. We groom you, we work with you, we turn you into something that might actually have a life.”

Then Richie delivers the big news: The band has to fire one of the guitar players. “Do you know who Frank Barcelona is? He’s booking you to open for the New York Dolls next month at the Academy.” There is no evidence that Barcelona handled the Dolls, but his Premier Talent was absolutely the booking agency for rock 'n' roll, so it’s a reasonable reference (if a heavy-handed one).

Of course, “the Academy” refers to the Academy of Music, the same theater where Hannibal played in Episode 4. The Dolls would indeed headline the storied venue on 14th Street, where they’d hold their “St. Valentine’s Day Massacre,” but not until 1974. The New York Dolls spent 1973 playing smaller venues like Max’s Kansas City, Kenny’s Castaways (the original location on 84th Street), the Coventry out in Sunnyside, Queens (which we already visited in previous "Vinyl" episodes) and of course the Mercer Arts Center, which didn’t collapse until August (and as previously established, did not collapse while the Dolls were onstage).

But the absolute best New York Dolls outing in 1973 would be their Halloween Costume Party held in the Grand Ballroom of the Waldorf Astoria (doors open 11 p.m.!) where the prizes for the most original costumes include “a bottle of Taylor New York State Champagne, a night on the town with the N.Y. Dolls and a weekend for three at a lovely motel close by the Newark Airport.” All of that said, it would have been very possible for the Nasty Bits to open for the New York Dolls, but not at the Academy of Music in this particular year.

Richie tries to entice Andrea Zito (Annie Parisse) to join American Century, and is treated instead to a spot-on rant about Pink Floyd instead: “'Dark Side of the Moon' doesn’t have a single on it and it’s a blockbuster. A prog rock concept album. Every mop head in America can’t stop contemplating the mysteries of that floating fucking triangle. Pink Floyd doesn’t have a face. Meanwhile, you’re still putting headshots on covers and calling it art.” Remember Wizard Fist from the beginning of the episode? Early Pink Floyd was never that bad, but the records that preceded "Dark Side" were dense, cryptic and fantastical. Albums such as "Ummagumma," "Atom Heart Mother" or "The Piper at the Gates of Dawn" were full of songs clocking in at eight minutes or more. "Dark Side of the Moon" abandoned all of that, and broke the cardinal industry rule of the day, that you had to put a photograph of the artist on the cover.

It’s always good to hear the music of Big Star anywhere for any reason, but it seems a misguided choice to use “Thirteen,” Alex Chilton and Chris Bell’s simple, stunning tale of young love, in a scene where Kip is getting ready to shoot heroin. “I love that you like this,” Jamie (Juno Temple) says, introducing a kind of justification for the song being stuffed into the scene, but it just ends up feeling like a very ham-fisted, forced placement. But she is absolutely correct when she notes that the Big Star album, “It sold about five copies to rock critics.”

The only good thing about the entire Devon-as-bait-for-Hannibal scene is “Pillow Talk” by Sylvia. Sylvia is none other than Sylvia Robinson. She wrote “Pillow Talk” for none other than Al Green, who turned it down for being too dirty--so she recorded it herself. She would later go on to become the founder of the legendary hip-hop label Sugar Hill Records, recorded “Rapper’s Delight” and produced “The Message” by Grandmaster Flash and the Furious Five. “Pillow Talk” would go to No. 1 on Billboard’s Best Selling Soul Singles as well as spend two weeks at No. 3 on the Hot 100.

(I spent a very worried few minutes between the time Devon stormed off after slapping Richie in the face and the time she turned the corner and walked into the Hotel Chelsea. That said, it’s about a 45-minute walk from Park Lane to 23rd Street, and that’s not clocked wearing heels.)

The success of the Lou Reed segment in this episode of "Vinyl" begins with the lengthy and bombastic intro to “White Light/White Heat.” It’s very faithful to the arrangement of the song as played by Lou’s band in that era and bears a very strong resemblance to the one from "Rock and Roll Animal," recorded at the Academy of Music at the end of 1973 and released in 1974. This was an important, yet sometimes questionable, era for Lou. Every time I used to hear the interminable intro to “Sweet Jane” from "Rock and Roll Animal" on the radio back in the day, I would yell something along the lines of, “What is this prog rock garbage, this is why punk rock happened” and move to turn the radio to another station just when the melody kicked in, three minutes into the song. I had the exact same reaction to the intro of "Vinyl’s" version of “White Light/White Heat,” so congratulations are in order.

The live portrayal of Lou Reed in 1973 (as opposed to Lou in ‘66 from the pilot) absolutely looks right. The curly, poufed hair is correct, the white makeup and the black around his eyes is dead on, the outfit is correct. The band behind him looked like he’d picked them up out on Long Island somewhere. The cadence of the vocals is correct, and "Lou’s" onstage movements are reasonable; if you watch any footage of Lou onstage in the '70s, let’s just say the action and behavior owe a lot to Lou’s recreational use of certain illegal stimulants. Conor Hanwick, the actor/musician (formerly of the Drums) playing Lou Reed, is an actual fan who professed to studying everything about Reed. All of that said, there was still something off about the scene--it didn’t feel dark or dangerous enough, and that’s hard to pull off unless the 1973 version of Lou Reed was standing on that stage. This was just not a battle "Vinyl" was going to win no matter how hard they tried, and to their credit, they did try very hard here to get it right.

Demerits go to the choice of venue--as noted, Lou was way past clubs at that point, and was at the Academy of Music and even Alice Tully Hall in ‘73; and to the audience. No one danced like that to Lou Reed, but it certainly would’ve been hilarious to see his reaction if they had.