The revolution vs. Rahm Emanuel: Why tomorrow's Illinois primary could remake Chicago politics

The biggest race could unseat the state's attorney at the center of a brutal police scandal. But that's not all 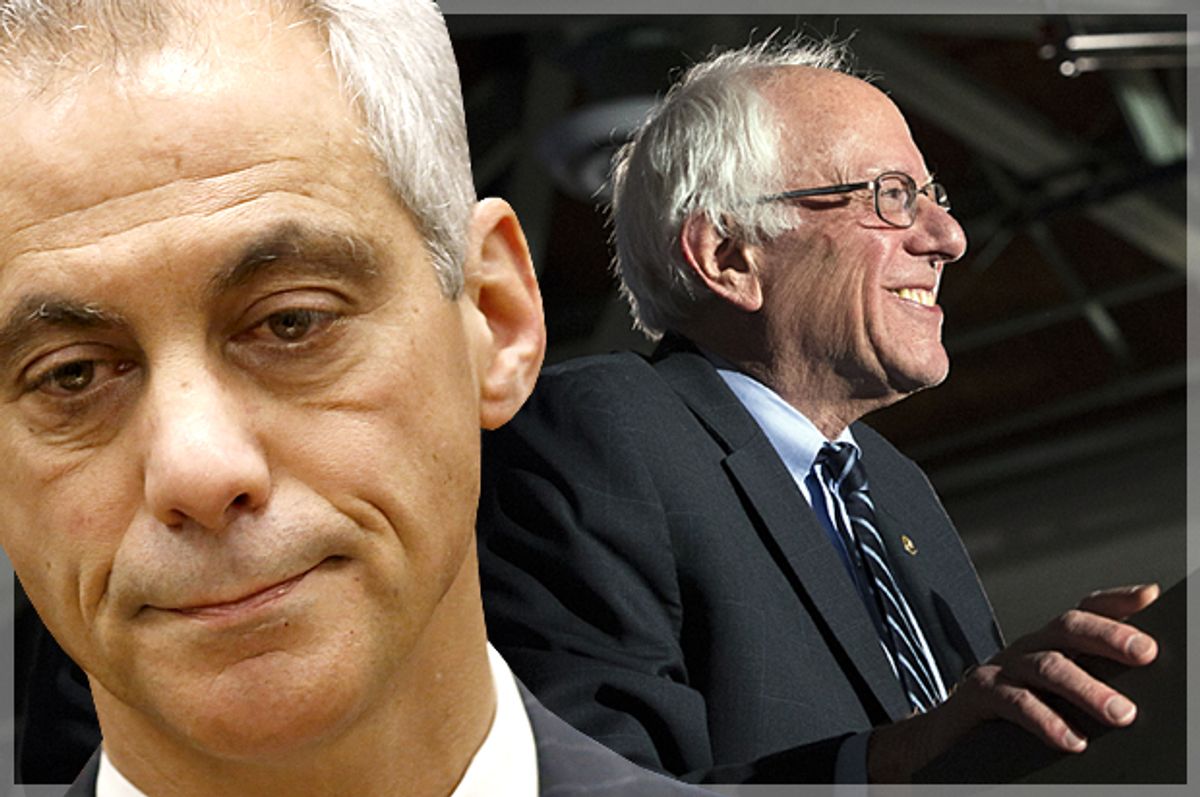 Bernie Sanders’s political revolution blew into Chicago last week and smacked its embattled mayor upside the head. “I want to thank Rahm Emanuel for not endorsing me,” Sanders deadpanned at a rally outside the city on Friday, the same day that a huge crowd of activists shut down a Donald Trump event.

“I don't want his endorsement!" Sanders told the crowd of supporters. "I don't want the endorsement of a mayor who is shutting down school after school and firing teachers."

And up and down the ballot, tomorrow is a big day in Chicago and a major test for the city’s ascendant left. The mass closure of public schools, a major teachers strike that followed, and continuing protests against police shootings have put two-term Cook County State’s Attorney Anita Alvarez at risk of losing her job and, more surprisingly, created the possibility for a Sanders upset in the Illinois Democratic primary. A YouGov/CBS News poll released Sunday had the insurgent democratic socialist, significantly behind in the delegate count despite a string of victories thanks to crushing losses in the South, two-points ahead of Clinton. Just the day before, FiveThirtyEight gave Clinton a better than 99 percent shot of winning.

“It looks like the race has tightened up in Illinois,” chuckled Cook County Commissioner Jesús “Chuy” García, a progressive who last year failed to beat Emanuel after pushing him into the first runoff vote since Chicago switched to a nonpartisan system in 1995. “The impossible seems to be coming to true.”

Across the country, Sanders and Hillary Clinton have fought to attract young black voters amidst a year of raucous protests against police violence. Despite Clinton’s much-maligned history with tough-on-crime measures, she has managed to win overwhelming majorities in the South. But in Michigan, Sanders greatly improved his performance with black voters, fighting Clinton to a draw amongst those under 40. Last week, his campaign rolled out three new ads, featuring García’s endorsement, hammering Emanuel’s education policies, and highlighting his role in the city’s civil rights movement. In Chicago, Clinton’s allegiance with the mayor has provided Sanders with an unparalleled opportunity to attack 21st-century Clintonism as business-as-usual hostility toward the poor and people of color.

“Rahm Emanuel and his negative approval rating, and what he’s done here around closing schools and police brutality, is a taint on anybody that’s associated with him,” says Jan Rodolfo, chair of the board of Reclaim Chicago, a grassroots organizing group affiliated with National Nurses United, a progressive union that has offered Sanders strong backing.

The big local race is the Democratic primary for state’s attorney. Like most big city prosecutors, Alvarez had provoked little opposition while running an office soft on police misconduct and mercilessly bent on incarceration in a city where rampant gun violence often dominates criminal justice debates. But that all changed in November, when a video was released showing Police Officer Jason Van Dyke shoot Laquan McDonald, a black 17-year-old, 16 times as he walked away. It was only then, hours before the video’s release, that Alvarez charged Van Dyke with murder. Throngs of protesters took to the streets, demanding that Alvarez and Mayor Emanuel resign.

“It’s become primarily a referendum about Alvarez’s tenure in office and particularly her handing of police abuse cases,” says Dick Simpson, a professor of political science at the University of Illinois at Chicago. “And it’s quite clear that a majority of voters do not approve of her performance.”

Alvarez’s biggest threat is Kim Foxx, a former prosecutor who grew up in poverty, including years in the now demolished Cabrini-Green projects. Foxx pledges to crack down on police misconduct and get smart on crime by keeping low-level offenders out of the system. Donna More, a resident of wealthy Lincoln Park who has worked as a prosecutor and lawyer for casino companies, could play spoiler. She’s very unlikely to win, but hundreds of thousands of dollars in family money have put her ads on TV.

Both the Foxx and Sanders campaigns are testing the strength of a growing rainbow coalition on the city’s left, a coalition that brought Mayor Harold Washington to power in 1983 and then fell apart under Richard M. Daley. The public schools movement, and now the anti-police brutality campaign, has prompted its reemergence. Foxx, who is black, must win over Latino and white voters to win. Sanders must expand his appeal to blacks and Latinos. A win by either, and especially a win by both, would signal a sea change in local politics and bad news for Mayor Emanuel.

Last year, García was not the left’s first-choice candidate for mayor. Just as Sanders stepped forward after Senator Elizabeth Warren demurred, García announced his candidacy late in the game after teachers union head Karen Lewis was diagnosed with brain cancer.

Emanuel held him off with help from the city machine, wealthy whites and, critically, majority black wards. García had strong support from the Latino wards, along with white and black progressives. But at the time, widespread anger over school closures failed to translate into a multi-racial front with sufficient strength to win. Though García performed well with black voters, a majority of voters in majority black wards stuck with Emanuel. He benefited from an endorsement from President Obama, for whom he served as chief of staff; from mistrust between Mexican and black communities; and from Emanuel's charge that his Mexican-American opponent was incompetent to manage the city's huge financial mess, a charge that García says was geared to appeal to white prejudice.

The McDonald video, however, has changed a lot. A close relationship with Obama might carry less weight today.

“I think that it’s a process,” says Jitu Brown, a community organizer from the heavily-black South Side neighborhood of Kenwood-Oakland. “There was a multiracial coalition that had worked together for years around education issues that really fortified Chuy’s campaign…What’s coming to the table now that wasn’t really involved in the process before” is “the voice of young black people.”

Foxx will likely receive widespread support in black wards, and Latino support for Alvarez, a Latina, is now in peril. García has endorsed Foxx, and called on Alvarez to resign last year after the McDonald video was released.

“The crisis in the criminal justice system has struck a cord with people, and now it’s not a question of voting for someone from their ethnic group,” says García, even though Alvarez “was the first woman” and “the first Latina” to serve as the county's top prosecutor. “I have never been as optimistic about a truly diverse coalition coming together than I am now." Which is not what he expected given his loss last year. “I think there’s a new level of awareness that we need to transcend some of Chicago’s patterns of racial block voting and go beyond those patterns into real multiracial, multiethnic, across faith coalitions.”

People don't make history in conditions of their choosing, and Tuesday’s vote will show whether the left’s impressive organizing in Chicago has caught up with public sentiment rapidly shifting in its favor. The left in Chicago, as elsewhere, has been rushing to build up the organizing base and institutions necessary to translate public outrage into electoral power. The Chicago vote will likely be much closer than the Clinton camp anticipated. After years of defeat and in the streets, the left is ready to move from protest to power.