We all enabled Donald Trump: Our deeply unserious media and reality-TV culture made this horror inevitable 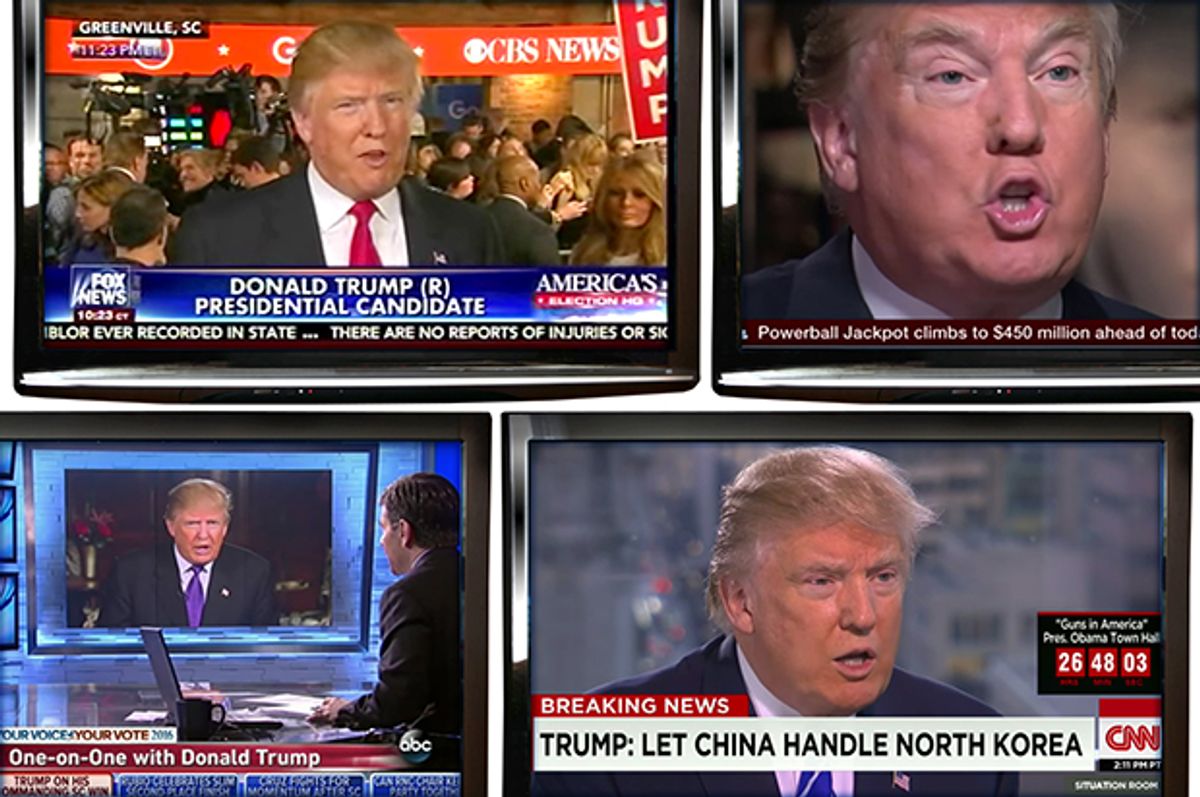 It is more than a little ironic that the Republican Establishment and the mainstream media are both now in full panic mode over the possibility of Donald Trump winning the GOP nomination. You would think that the Republican Party, which has been, let’s face it, hate-spewing, poor-bashing, government-stopping and corporation-loving for decades, ought to be the leading culprit for having paved the way for Trump’s success. As for the media, Marco Rubio, who claims to be exactly where he wants to be after losing 14 primaries and caucuses and winning only one, holds them responsible, which, from a candidate who has demonstrated little support outside the media, is a bit disingenuous. Still, even Rubio is occasionally right. The media did have a lot to do with enabling the rise of Donald Trump. Just not how Rubio or most people think.

That is not the standard line. The standard line on how the media are to blame is that they give him far more attention than any other candidate, and far more than his empty, sloganeering campaign warrants. According to the Lexis-Nexis tracker, which follows the coverage for each candidate on the Web, Trump laps the field. This past Thursday, he was the subject of 52,683 articles. Bernie Sanders was next at 4,400. In a measure of what Lexis-Nexis calls “voice,” which tallies both Web mentions and mentions on social media like Twitter, Trump received 84 percent of the Republicans’ share. No surprise there.

How much of this attention is driven by the media itself and how much by public fascination is hard to determine since these two feed each other. We do know, as Rubio said, that the media gives Trump attention because he is a ratings-getter, and he has cleverly played off this. CBS head Les Moonves gave away the game earlier this week when he admitted, “It may not be good for America,” meaning the Trump-dominated campaign, “but it is damn good for CBS,” meaning the ratings. And then he kept doubling down: “The money’s rolling in and this is fun.” “I’ve never seen anything like this, and this is going to be a very good year for us. Sorry. It’s a terrible thing to say. But, bring it on, Donald. Keep going.” “Donald’s place in this election is a good thing” – presumably for CBS stockholders. To which I can only say that the networks were granted licenses to the public airwaves, our airwaves, by promising to provide a public service. Moonves just blew that pretense all to hell.

But the media’s absorption with Trump wasn’t Rubio’s sole plaint. He also grumbled that they were not only giving Trump free time, but also pretty much of a free pass. This certainly isn’t true when it comes to the press’s characterization of Trump. “Stop” has this week replaced “Donald” as Trump’s first name. And both left and right certainly purport to hate what he represents. Yet Rubio is largely correct when it comes to challenging Trump for what he says. The media should be pounding Trump not for his bloviation or his braggadocio or his bad manners or even his implied racism and explicit nativism. They should be pounding him for what he purports he will do as president. But they don’t, and Trump knows they won’t. He knows he can easily bulldoze the press because it is too cowardly to take him on face to face – though, truth be told, Fox News, which has a particular animus toward him, did a pretty good job of taking him on in Thursday’s debate.

But even that cowardice isn’t the most important way in which the media have enabled Trump and nudged him to the brink of the Republican nomination, even as they wail about the prospect. The far more grievous crime is what the media have been doing to our politics for decades now – something for which Trump just happens to be the chief beneficiary. Nearly 60 years ago, the historian Daniel Boorstin in his seminal book "The Image" described a society in which things were increasingly staged expressly for the media without any intrinsic merit of their own – things like photo ops, press conferences, award ceremonies. He labeled these “pseudo-events” because they only looked like real events, while being hollow inside. And Boorstin defined pseudo-people too – people whose activities, as he put it, had no intrinsic value either. He called them “celebrities,” and he defined them as people who were known for being well-known.

Politics would seem a far cry from the pseudo, if only because it determines real things with real effects, namely how our country is governed. But almost from the time Boorstin was writing, the media had been growing increasingly bored with traditional politics. The media, after all, were in the business of getting an audience, not educating it, which is why campaigns began to assume the contours of movies, and why personalities began to overshadow policies. Still, campaigns retained some grain, however small, of seriousness. Issues were debated. Party ideologies were contrasted. Qualities of leadership were dissected.

Until 2016. If the media were spoiling for a pseudo-campaign, they finally got their wish this year at the point where all the usual trimmings and frivolities of a campaign moved to the center, and the center disappeared. Another way to think about it is that a pseudo-campaign is all about itself and not about the presidency. Just look at the horse race aspect, which has long consumed 95 percent of our election coverage. Trump is the horse-race candidate, expatiating on little else besides his lead in the race. But let’s be clear: Donald Trump did not create this situation. He is its heir, and simply the most gifted practitioner of the pseudo-campaign, though Cruz and Rubio, equally pseudo, try hard to purvey the same lack of substance. And let’s be clear about something else: We only tolerate this state of affairs because the media have changed our expectations of a campaign. Having given us nothing in election after election but a show, we expect nothing but a show.

Donald Trump was born for this. If he is the heir to our first pseudo-campaign, he is also our first pseudo-candidate because he is, in Boorstin’s terms, a celebrity who stands for little besides his celebrity, which doesn’t mean that he isn’t potent. He is. It just means that he is not held to the standards to which politicians have been traditionally held, not because, as Rubio would have it, the media benefit financially from the drama that surrounds him, though clearly they do, but because they treat him like a celebrity and not a real political candidate. Celebrities aren’t expected to be substantive. In any case, while celebrity may not be much of a recommendation for the presidency, it is a hell of a recommendation for a presidential aspirant performing before a media that is far more interested in creating a reality show than presenting a process for selecting a leader. Trump is the Kardashian of politics.

Of course, just about everyone in the media now, excepting Les Moonves, is bemoaning the inevitability of Trump’s nomination, which is a bit like the boy who kills his parents and then throws himself on the mercy of the court because he is an orphan. The media may say they regret it, but they did this. They systematically destroyed our politics in the name of entertainment. They systematically conditioned us to anticipate a show. And, frankly, they will keep on doing it. In fact, Moonves seems to indicate that he would fire anyone who didn’t.

So the media can cry all they want and hope to exculpate themselves by trying to stop Trump. But in the end, Trump could only make a mockery of our politics because the media already had.