Breitbart's meltdown wasn't shocking at all: Why we shouldn't be surprised by this dumpster fire of a scandal

The way Breitbart News treated an employee assaulted by a Trump aide was despicable. It also wasn't hard to predict 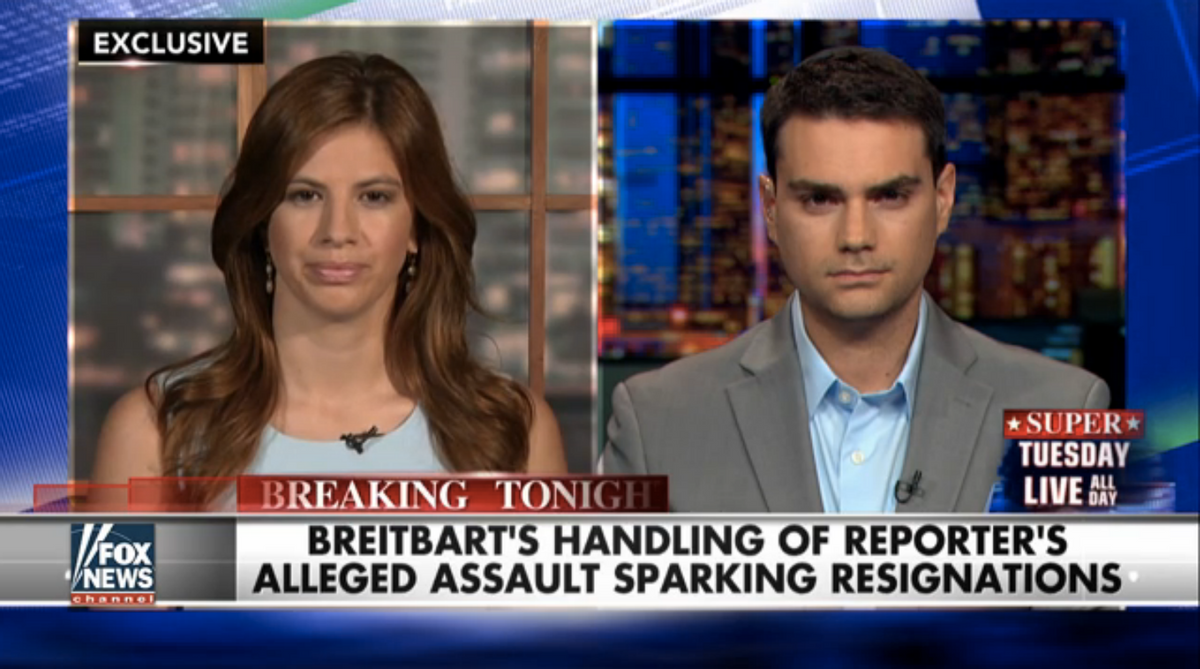 If there is one bright spot to this angry, vicious primary campaign, it is watching in real time the immolation of the trash heap that is Breitbart News.

On Friday, staffers began quitting the site after its top brass sided with the Donald Trump campaign instead of Breitbart reporter Michelle Fields, whom campaign manager Corey Lewandowski violently manhandled at an event. As of Monday afternoon, the number of departures had reached six. In addition to Fields herself, the list of now-ex-Breibarters includes spokesman Kurt Bardella, writer Jordan Schachtel, editor Jarrett Stepman, and editor-at-large Ben Shapiro and his father, David, who occasionally contributed to the site under the pseudonym William Bigelow.

The dust-up between Fields and Lewandowski and the subsequent resignations brought to the fore a schism that had apparently been brewing inside the Breitbart-verse for some time over the site’s fawning coverage of Trump and his campaign. And as some leaked Slack chats showed, that divide was a classic managers-versus-workers argument, with editor-at-large and in-house counsel Joel Pollak trying to protect the site’s public image (and possibly his own personal interests), while his staff argued vehemently that management should be supporting Fields.

But what really brings forth the crocodile tears for the reprobates who spend their working lives pushing out poison for Breitbart News is their sudden discovery that the site they work for is not a “journalistic enterprise” but a “propaganda organization” working “in direct opposition to limited-government conservatism.” Breitbart employees seem to genuinely believe they were rebels fighting the good fight to speak truth to liberal power, when the reality is they have been instruments for every grifter, blowhard, and paranoid lunatic the right has vomited up over the last decade, used to inject an IV full of venom directly into the American bloodstream.

As constituted, Breitbart has always been a clearinghouse for right-wing rage over every perceived slight to the self-described “real Americans” who make up the conservative movement. Every conspiracy theory about Barack Obama, Democrats, liberalism, Muslims, terrorists, the intellectual lives of politically correct college students, and every other conservative bugaboo you can imagine has found a home on the site at some point. It didn’t matter how often a Breitbart “scoop” was revealed to be a pernicious lie, because there have always been enough credible suckers to keep reading.

But it is the moaning from the departed employees about the “legacy” of Andrew Breitbart being diminished that brings the laughter up to gale-force levels. The site’s founder was a toxic ball of incandescent rage who gleefully tarnished ordinary people with edited videos that were quickly and thoroughly debunked, but not before doing serious damage to their subjects. He was a weirdo who stood outside a hotel hosting the annual Conservative Political Action Conference one year and incoherently screamed at protestors to “STOP RAPING PEOPLE!” He was a smear merchant who recruited the worst sorts of right-wing hacks to his site, where they had a platform to spew whatever random thoughts passed through their warped minds.

The legitimacy of Breitbart’s journalism aside, Lewandowski’s assault on Fields was disgraceful and should be condemned. What really highlights the cynicism of some Breitbarters’ censure of the episode and Pollack’s internal spinning is their past reaction to journalists from more mainstream and left-wing organizations being manhandled during the pursuit of a story. Though Shapiro once (admirably!) criticized the police for arresting the Huffington Post’s Ryan J. Reilly and the Washington Post’s Wesley Lowery during the protests in Ferguson, MO., in August of 2014, other writers for the site spent a great deal of time accusing the two men of race-baiting and wrongly making themselves part of the story.

There was no such wishy-washiness with the Fields situation, nor do I hear any principled complaints about not being able to cover victims of violence who were not media members at Trump rallies. (Quick, Breitbart! What was the name of the black man sucker-punched by a white man at a Trump event in North Carolina last week?) To be fair, it’s true that much of the mainstream media went into overdrive when the victim was one of their own. The breakdowns of video of the incident rivaled examinations of the Zapruder film. But those reporters, for the most part, work for organizations that have solid records that have earned them a little leeway. The hacks who work for Breitbart do not.