I'm stranded in Trumplandia: Life on the edge of America's abandoned middle class

While our leaders boast about an anemic recovery, both parties ignore the suffering before them. I know it too well 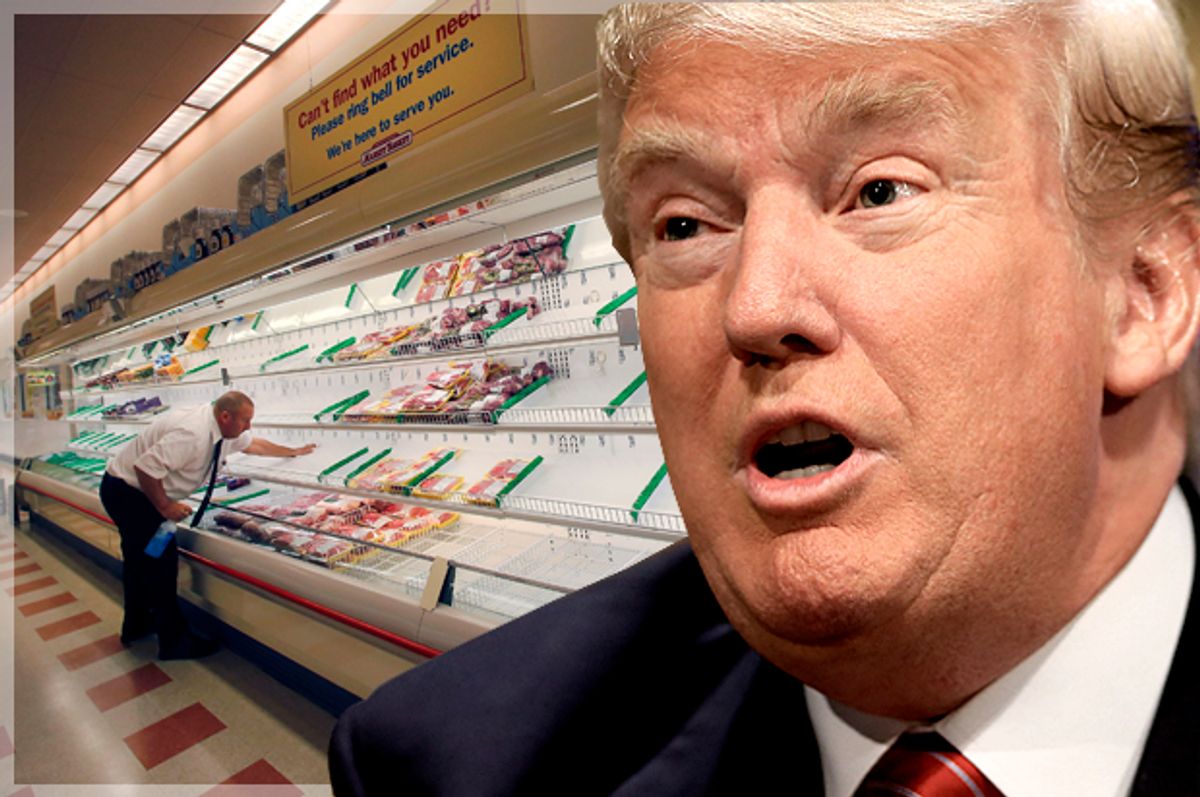 No doubt the powerful interests that want to protect their ever-growing share of the national wealth heaved a sigh of relief when they saw the recent images of Trump rally attendees beating up on progressive protesters, taking aim at Trump

From the oligarchs' point of view, there is nothing better than having the victims of predator multinational capitalism all go after each other over issues like race and national origin. What you don't want is a peaceful convergence of left and right. Better to have everybody fractionalized and alienated, scrambling for a share of the scraps.

Both of the major parties have long been co-opted at the top by these corporate interests, puppet masters pulling strings behind the scenes to become the secretary of the Treasury or appointed as ambassadors wherever they want. It's all pay-to-play.

Right now, on the Democratic side, the presence of the superdelegates insulates former Secretary of State Hillary Clinton a bit from the vagaries of the ballot box. And as brilliantly as Sen. Bernie Sanders has executed his insurgent campaign, he has to continue to try to offer praise for President Obama, whose two terms have seen America's income and wealth disparities only widen, with middle-income and poor Americans continuing to lose ground. The big banks have gotten bigger, the war on terror has widened, and the clamp-down on government whistle-blowers has only escalated.

Last month, in South Carolina, a state where active duty and retired military are a big part of the GOP base, it became clear that the RNC had lost the troops, as Donald Trump won the state's 50 delegates despite having called out President George W. Bush for waging an unnecessary war on Iraq under false pretenses.

The bipartisan overuse and abuse of America's volunteer military has left many of these patriotic families fractured by suicide, addiction, long-term disability and divorce. They, like the residents of Iraq and Afghanistan, know the real price of these conflicts without end.

When both Trump and Sanders carried Michigan, it became clear that the rising anger within the electorate was about an America that no longer works for American workers.

What we have on our hands now is a political predator class that has been ignoring the social and economic circumstances of the people for a long time, and profited by doing so. They have kept themselves in power by serving the richest of the rich, cynically playing regions of the country, and segments of the population, against one another.

Likewise, when unions were chased out of the private sector, but made inroads in the public sector, big money interests proceeded to demonize public unions for getting the type of pay and benefits that the rest of us were denied, because the new global trade imperative would not permit it.

We were all supposed to become lean and mean, like a vast team of Borax mules, pulling the billionaires’ dreams of global domination over the finish line. And for this great favor and opportunity, to work for ever-shrinking wages, higher taxes and less security, we are to deify the billionaires as paragons of philanthropy, elevated on golden media thrones of their own design.

Now it is time to smash some idols.

Sanders and Trump's Michigan moments were about a working-class America chained, headed up a downward running escalator. We can’t ascend those stairs no matter how many hours we work, or how many coupons we clip. And sad to say, our kids, who went to college just like we demanded, are chained a few treads below us, by their own debt shackles, as we all trudge in place on that same grand conveyor belt to nowhere.

As the latest Department of Labor data indicates, the average work week is shrinking and is now down to 34.5 hours a week, which is below full-time. Wages are down as well. Welcome to part-time America.

For me, at 60 years of age, this is no abstraction. My three 20-something daughters are all college-educated, working and living independently, but have massive amounts of college debt we are all trying to pay off. My wife is self-employed and I have been working as a reporter/ broadcaster for decades. Over the years the deflation in writer’s fees has been dramatic. Stories that used to fetch $1 a word now get a fraction of that. The goal-line stance of almost every going media concern is to avoid actually employing anyone, so you are reduced to the realm of the so-called independent contractor, but always happy to have the work.

Despite working with several different outlets, I had to start working overnight at the local supermarket on the night crew, for $9.13 an hour. The three other guys I work with are a bit younger than I am, but represent several decades of experience stocking shelves overnight, checking freshness dates and really caring about what they put on the shelves for people they rarely see.

I have thought what a good piece of time-lapse video it would make to see how 1,000 cartons on 10 pallets, 10 feet high, gets broken down, spotted on the aisles, and put on the shelves. It isn’t all that pretty. I have to admit to stumbling a bit trying to move those massive bags of dog food that at 3 a.m. can feel like you're trying to toss a waterbed alone or steer a really drunk dance partner to a graceful ending. And who knew the vast choices available for kitty litter? That’s 21st century America, infinite choices for all the shit that doesn’t really matter.

We are a union shop, and my colleagues make a decent wage, have healthcare and weeks of paid vacation. I have none of that, and my big consolation prize was outperforming the 29-year-old who started the same week I did, whom they subsequently let go. I don’t begrudge my union mates the wage and benefits they earned over a lifetime of service. I just want to know why the union to which I pay dues seemed to stop trying for the new hires like me?

I have been writing about income inequality for years, but it really didn’t hit me until that first paycheck a few weeks back, when I hit 35 hours and saw that my take home pay was $270. I handle olive oil that costs twice my hourly wage.

Over the years I have tried to stay in shape but after a few weeks of moving around massive quantities of bottled water, flour and sugar I realized I was using muscles I hadn’t used for decades.

Ironically, it was in my young adulthood, when I worked at a Shop-Rite in Ramsey, New Jersey, also stocking shelves in what was also a union shop. Back then I was making enough money, above the minimum wage, that I could live on my own, and pay the less than $400 a semester it cost me to go to Ramapo College, a state school.

I want that America back.