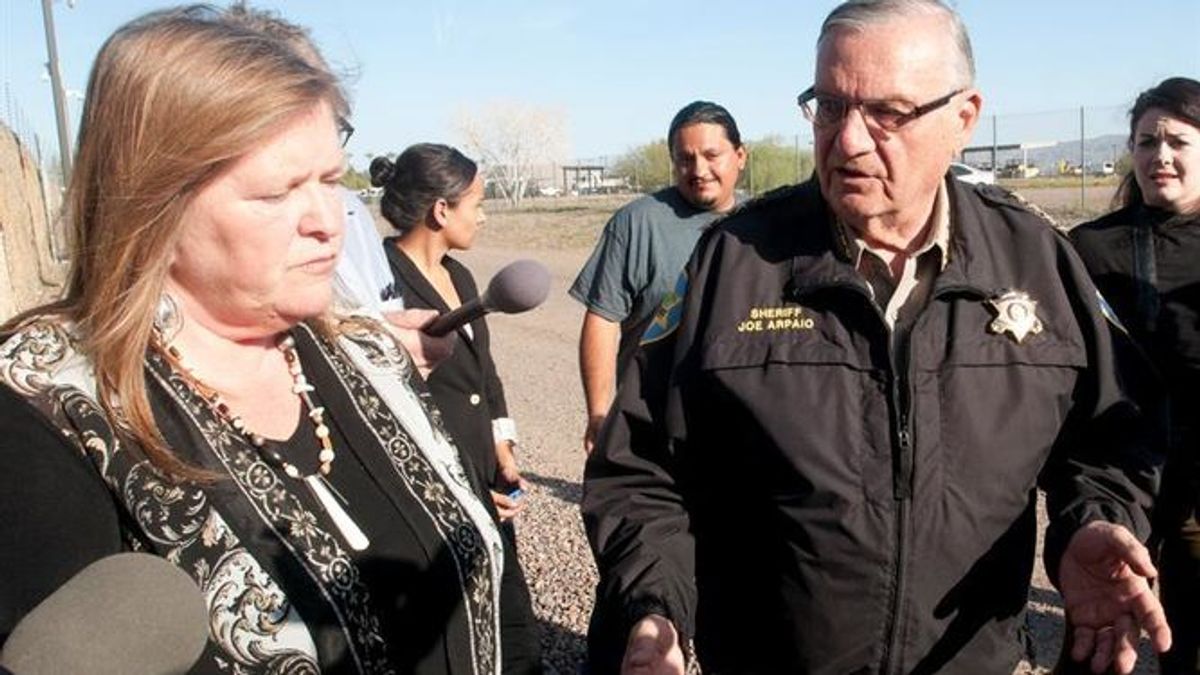 While campaigning on behalf of her husband and visiting with immigrant activists in Arizona, Jane Sanders received a "personal tour" of one of the nation's most notorious jails from one of America's most outspoken anti-immigrant law enforcement officers.

Sheriff Joe Arpaio offered Sanders an impromptu tour of Maricopa County's "Tent City" jail after Sanders came to observe conditions from the outer perimeter with local Latino activists. The American Civil Liberties Union has described the conditions at Arpaio's tent jail as "inhumane." The right-wing sheriff, however, has boasted about his tough-on-crime approach that feeds inmates rotten fruit and moldy bread and houses them outdoors in makeshift tents while the temperature in the Arizona reaches 130 degrees.

Arapaio, a longtime Birther and major Donald Trump backer, said that his invitation to Sanders should in no way be misconstrued as a switch in allegiance on his part, but welcomed the opportunity to clear up what he called "misunderstanding" about his facility.

"All people in this prison have been convicted first for a crime committed as drug trafficking," Arpaio told Sanders as she visited with inmates dressed in black-and-white stripes and pink socks.

Sanders wasn't buying it, tweeting after her visit that Arpaio had "showed up unexpectedly" and that she "asked him several questions" about racial profiling, "to which he had no answers."

"I can not understand how they can have inmates living this way," Sanders told a Spanish-language new outlet at the end of the tour.

"What I saw and heard firsthand today by visiting with the families and seeing tent city was very disturbing," she added in a news release. "Sheriff Arpaio did not even attempt to explain or excuse his inhumane treatment of people of color — not that he could."

Watch Sheriff Arpaio defends his support of Donald Trump and compare his campaign to that of Sanders' husband, Bernie, below: