Airlines' brazen robbery: Fees are out of control and ticket buyers have no real choice -- what a business model 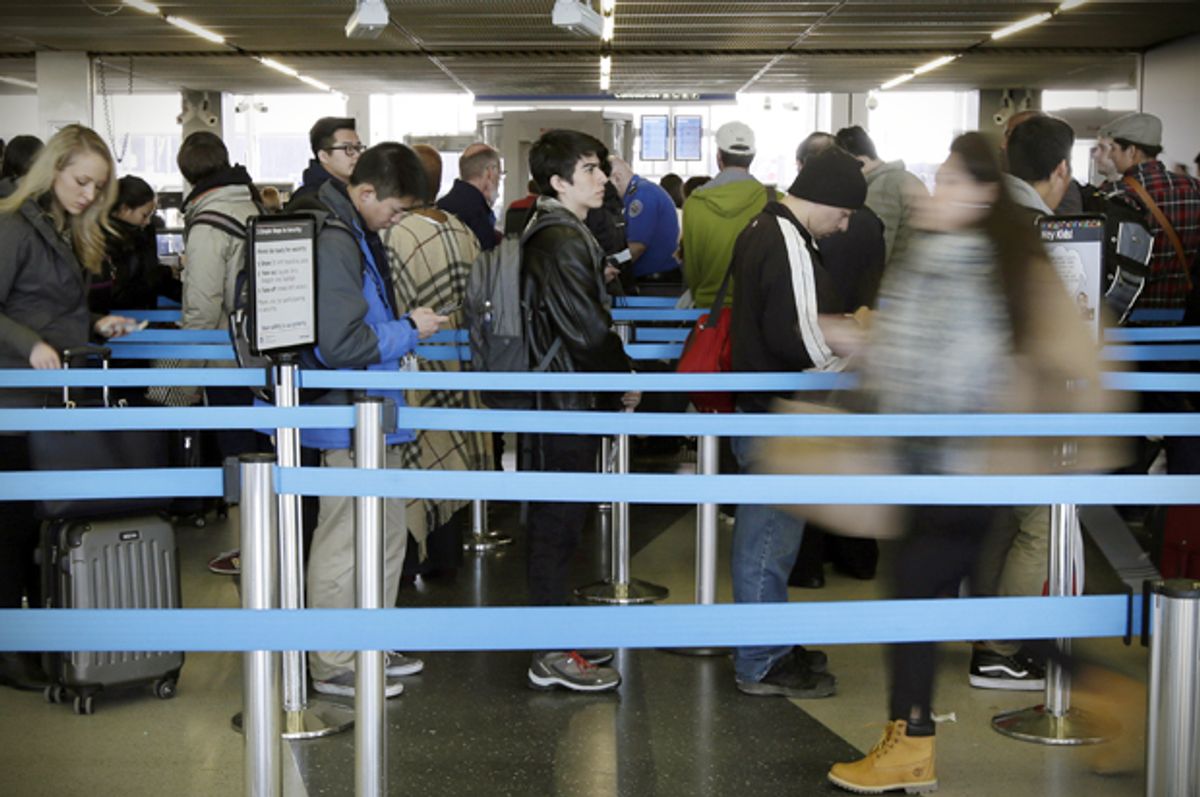 Facebook
Twitter
Reddit
Email
view in app
If you take the word f-r-e-e and rip the "r" out of it, what do you get? Two things, actually: One, instead of "free" you get "fee" -- and then you get mad.
This is happening to millions of airline passengers who're discovering that the advertised price of a ticket is not the half of it. Beaucoup fees have been added, charging us for items that previously were (and still should be) free. People's rage-ometers zing into the red zone when they see that these fees-for-former-freebies will often more than double the cost of a trip.
Like diabolical bankers did years ago, top executives of airline corporations have learned to goose up prices and profits (as well as their own pay), by nickel-and-diming customers. Only their fees are way more than nickel and dimes. For example, if you schedule a flight, but something comes up and you have to change the time, day or destination of your trip -- BAM! -- airlines zap you with a $200 fee. Basically for nothing! Computers quickly make the change, costing the corporation a mere pittance, but rather than graciously accommodating your need and making you a satisfied customer, they pick your pocket and make you angry.
Gouging and infuriating ticket buyers might seem like a poor business model for the long run, but airline CEOs these days insist that their duty is not to please consumers, but only to make their major stockholders happy by maximizing their short-term profits. And, indeed, the rip-off is very lucrative for the corporate elite -- airlines pocketed nearly $3 billion last year just from fees they charged passengers who needed to alter their flights.
In one of Stephan Pastis' "Pearls Before Swine" comic strips, his character, "Rat," develops a smart phone app that I want. As Rat explains it: "Whenever your bank charges you some stupid fee for something, you just tap this little button here." Oh, asks another character, does the app file a complaint? "No," says Rat, "it summons a herd of bunnies that parachute in and eat the bank's CEO."
Now that's a useful app! I'd also want it to sic the bunnies on today's airline executives, for their fees have become stupider than bank assessments. They are not just charging fees for changing your flight, airlines even charge you a fee for calling to buy a ticket from them! Also, while the price of jet fuel has plummeted, they're still stinging customers with a fuel surcharge fee. It doesn't stop there, they also charge you for picking seats, using their pillows and blankets, checking or carrying on bags, and -- get this -- families sitting together. That adds up to a totally unwarranted multibillion-dollar, corporate windfall -- siphoned right out of our pockets.
How do they get away with such brazen robbery? By colluding with each other to prevent customers from having any real choice -- and by regularly doling out campaign donations to keep Congress critters from interfering with their monopolistic gamesmanship. Thanks to a frenzy of mega-mergers, only four airline giants -- American, Delta, Southwest and United -- now control 80 percent of all domestic airplane seats, and most of our airports are dominated by only one of the Big Four, leaving fliers at their mercy. By dividing up the market, colluding on fares and fees, and effectively bribing Congress, airlines hauled off a record $33 billion in profit last year -- an increase of nearly 90 percent over the previous year!
But, hey, they say they're going to share that with us. How? By handing out a little bag of snacks to us passengers. Perfect -- they gouge billions out of our wallets, then literally try to placate us with peanuts. It's time to call in the bunnies. To curtail this "Great American Plane Robbery," several senators have proposed a "FAIR Fees Act." For information contact, Sen. Ed Markey's office: 202-224-2742 or www.markey.senate.gov.
To find out more about Jim Hightower, and read features by other Creators Syndicate writers and cartoonists, visit the Creators Web page at www.creators.com. Copyright © 2016 CREATORS.COM