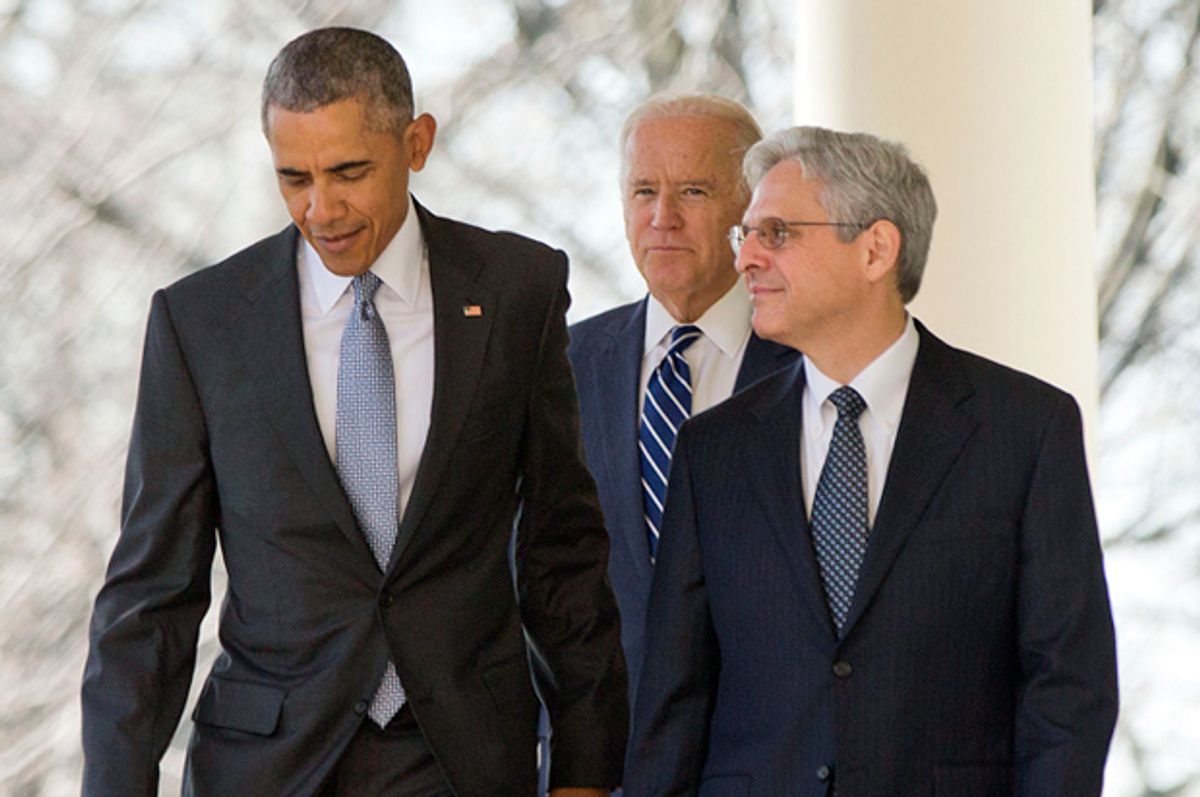 Merrick Garland walks out with President Barack Obama and Vice President Joe Biden as he is introduced as Obama's nominee for the Supreme Court, March 16, 2016. (AP/Andrew Harnik)
--

President Obama has finally made his pick for what is probably the worst, most thankless job in Washington: Merrick Garland, chief judge of the D.C. Circuit Court of Appeals, is his new nominee for the Supreme Court. The nomination will now go to the Senate, where the Republican majority has promised it will not proceed past their impregnable wall of principled obstruction.

As far as the timing goes, the president could hardly have picked a better moment to confront the Republican obstructionism in the Senate. Ever since Antonin Scalia passed away unexpectedly last month, the Republicans in Congress have insisted that his successor to the high court must be nominated by the next president. The American people, they insisted, should have a say in who gets to fill that vacancy. They pretended that this stance was rooted in principle and precedent, but it was and is all about political power: the Republicans wanted to keep open the possibility that a Republican president would pick Scalia’s successor and restore the court’s 5-4 conservative majority.

At the time, it seemed at least possible that someone like Marco Rubio or even (Senate Judiciary Committee member) Ted Cruz could be that president. But since then, it’s become impossible to deny that that likely Republican nominee is former reality TV star Donald Trump. Tuesday's night’s slate of primaries only further strengthened his grip on the nomination – he padded his delegate lead, denied Cruz the upset victories he was looking for, and bounced Rubio from the contest altogether. And now Obama has put the choice to the Republicans: are you going to consider the long-serving and widely respected judge that I’ve nominated, or will you risk letting a corrupt billionaire scam artist who lacks a basic understanding of how government works make the pick? Segments of the Senate Republican caucus have spent the past month either sounding alarms about a Trump victory or actively opposing his candidacy – now they’re going to argue that he has a stronger claim to this nomination than the sitting president?

The political bind for the GOP on this is brutal. And already we’re seeing some cracks in the obstructionist façade. Two vulnerable Senate Republicans up for election in blue states this year – Illinois’ Mark Kirk and New Hampshire’s Kelly Ayotte – have broken with the GOP leadership and said they’ll meet with Garland. Sen. Pat Toomey tweeted that he’d be happy to consider Garland’s nomination, but only if he’s re-nominated by Obama’s successor. And Sen. Orrin Hatch told reporters he’d be open to considering Garland’s nomination during the lame-duck session after the election, which completely undercuts the Republicans’ argument that “the people” should have some say.

As for the nominee himself, Obama’s selection of Garland scrambles the political calculations on both left and right. As ThinkProgress’ Ian Millhiser writes, Garland isn’t the dream pick for liberals – he has a “reputation for moderation,” and he has a “relatively conservative record on criminal justice.” Garland is also a relatively old nominee, and he’s a white guy looking to succeed another white guy on the court. The White House’s political calculation seems to be to make it as difficult as possible for Republicans to obstruct the nominee. They can’t dismiss Garland as a wild-eyed liberal, they can’t deploy the sort of dog-whistling racial politics that marred Sonia Sotomayor’s confirmation process, and the public record is studded with quotes from prominent Republicans and conservatives praising Garland.

If one were to make the (still foolish) assumption that the GOP blockade could be broken, one would have to think that Merrick Garland is one of the few nominees who could do it. The risk in selecting Gardland, however, is that the White House may not have liberal backing in trying to push the nomination through. President Obama’s put the GOP in a tough spot politically with the Garland pick, but he’s left his own base out in the cold to get there.