The decline and fall of Rubio: How a candidate who looked promising flopped so badly

Marco Rubio's campaign is done, and it's all because he never gave voters a reason to stick with him 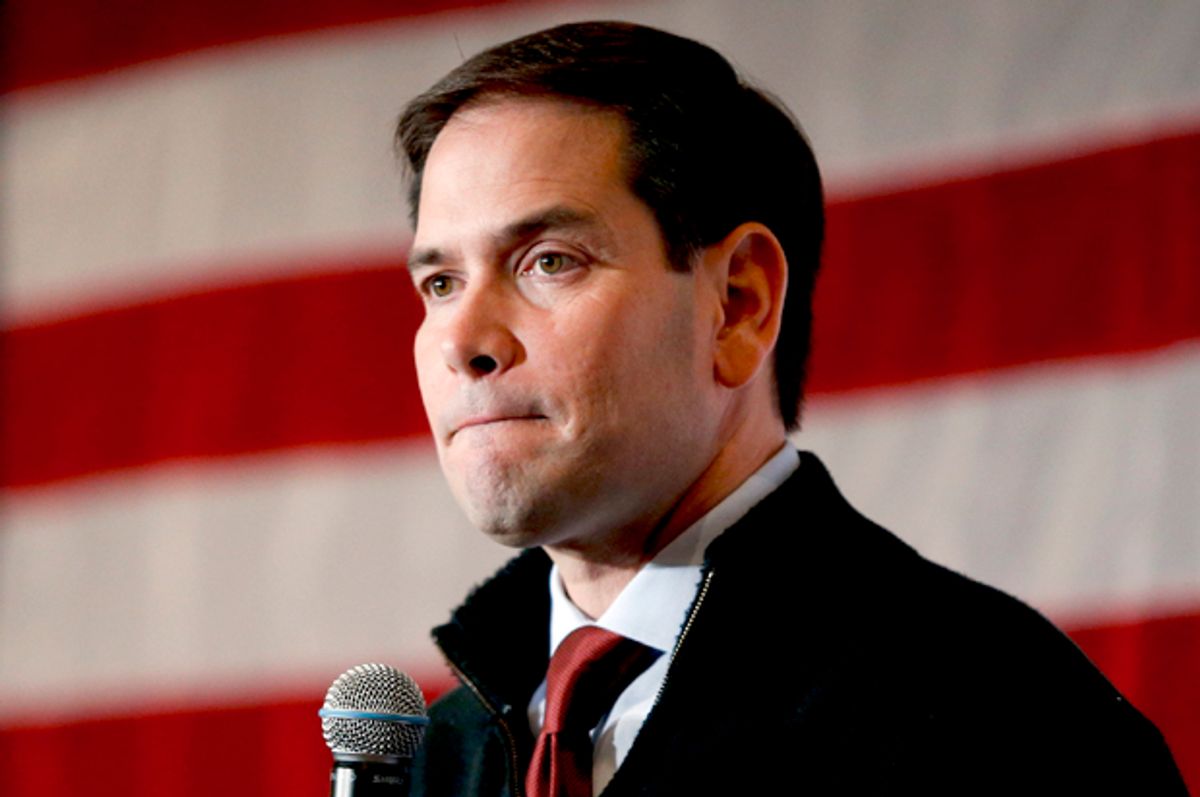 Marco Rubio sat down for an interview with Fox News yesterday, and he was asked if he would drop out of the Republican presidential race if, as the polls were strongly indicating, he lost his home-state primary in Florida. Rubio, who had spent the two weeks up to that point hyping the importance of a Florida victory and predicting that “the winner of the Florida Republican primary will be the nominee,” explained that the Florida outcome actually had no bearing on his political future. “Our plan is to continue forward in this campaign,” he said. “My campaign’s never been built on winning in one particular state.”

That’s true, insofar as Rubio’s campaign wasn’t built around winning states, period. The Rubio 2016 experience was always built around the promise of the victory to come – he’d lose and lose and lose, but he and his supporters would insist that the next contest was where they’d finally break through. Heading into last night, the only state Rubio could claim in the win column was Minnesota (he also won the Puerto Rico primary and barely edged out John Kasich in Washington, D.C.). All the other dreams and promises of glorious Rubio victory – New Hampshire, South Carolina, Nevada, Virginia – were stolen away by Donald Trump.

And, in keeping with that pattern, Rubio’s dream of winning his home state – the one state above all others that he should have won – was savagely crushed last night by the Trumpian hordes. The state was called immediately after the polls closed. It wasn't even close. And Rubio, promises to soldier on to the next elusive future victory notwithstanding, did the sensible thing and suspended his campaign.

The big question now is what went wrong with a campaign that, at least on the surface, seemed to have so much promise. If you’re looking for specific mistakes Rubio made on the campaign trail, there are several worth pointing out: Like the rest of the Republican field, he was too accommodating of Trump’s nonsense early on; he flopped terribly in the New Hampshire debate and got pantsed onstage by Chris Christie; and his Don Rickles-lite routine about Trump’s spray tan and pants-wetting was equal parts embarrassing and ineffective. But none of those things explain why Rubio never became the front-runner that so many pundits assured us he was.

To my reckoning, the moment that best reflects why Rubio’s campaign flopped was the second-place “victory” speech he gave in South Carolina. Everything about it was off. He had just been thumped in the state by Donald Trump, who won by 10 points and took home every single delegate that was up for grabs. Trump’s coalition in the state was broad, and he dominated across income groups and ideological lines. Rubio’s initial plan had envisioned an outright victory in South Carolina, but instead he finished just about 1,000 votes ahead of Ted Cruz in a tight fight for second place. Something for Rubio had not clicked, while Trump’s message of protectionism, economic revitalization and cultural (and racial) resentment resonated with the state’s voters.

And yet there Rubio was, onstage with the slate of South Carolina elected officials whose endorsements had not helped him win, declaring that “the message is pretty clear – this country is now ready for a new generation of conservatives to guide us into the 21st century.” (Never mind that he lost South Carolina conservatives to Ted Cruz and Trump.) He rhapsodized about Ronald Reagan and announced that “the children of the Reagan revolution are ready to assume the mantle of leadership.” It was a message that was crafted to thrill the conservative pundits and Republican donors who were always Rubio’s strongest supporters, and who didn’t understand how Trump (who had pointedly attacked the most recent Republican president during a debate just days before the primary) could possibly be winning. That speech made Rubio look great in the eyes of people who already loved him, but it was out of sync with what the electorate was looking for. His confidence didn’t suit the election results, and he came off more as someone who was grasping for what he felt was his by right.

That, I think, explains why Rubio lost: he never gave voters a reason to stick with him. He’s a handsome fellow with a compelling life story who said all the right things that Republican presidential candidates are supposed to say, but his message of Reagan-esque optimism was ill-suited to this angry moment in politics, and he told voters they should be on Team Rubio rather than convince them. Without a base of loyal support, his stumbles hurt more and his victories became ever more elusive. And when you just can’t win, it’s tough to convince people you’re a winner.