Trump charges toward the nomination: The billionaire breaks Rubio's back, reducing his opposition to the deeply deluded Cruz and Kasich

Trump has another astounding night, making it harder to see the GOP keeping him from being nominated 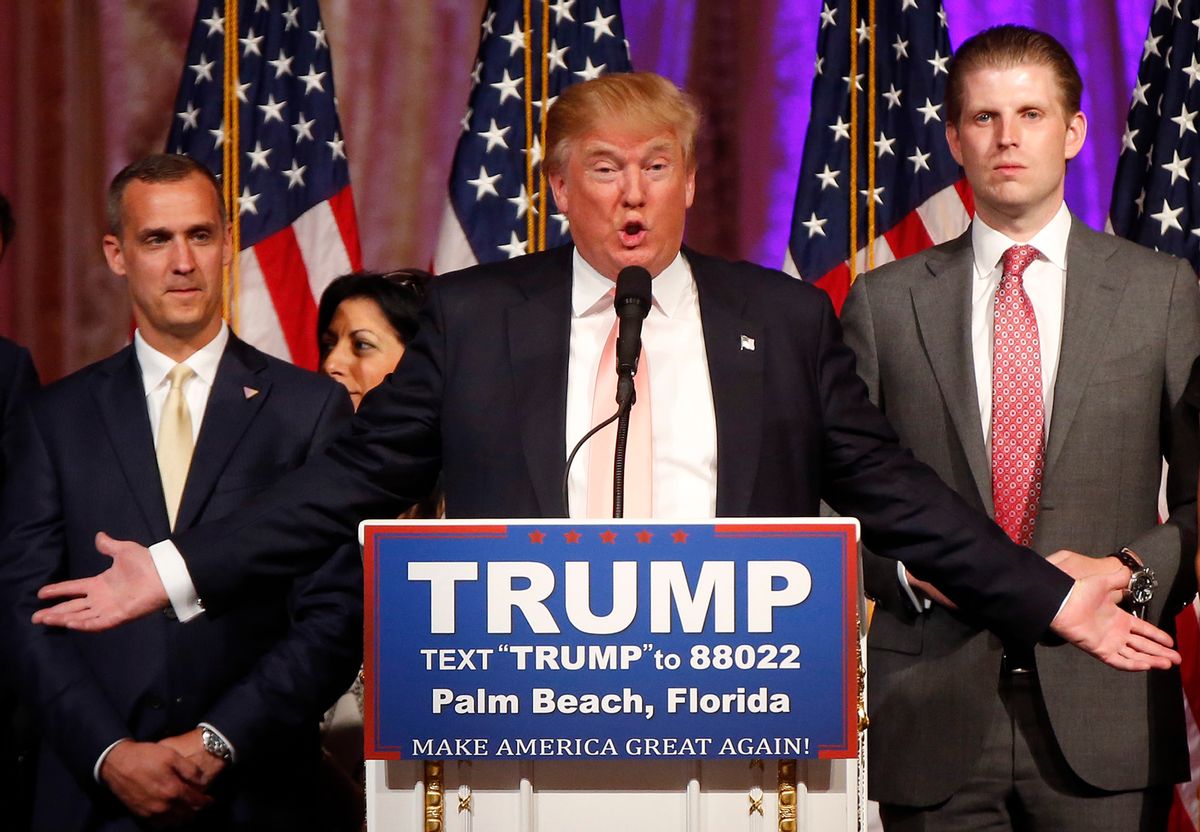 Donald Trump doesn't just defeat his establishment Republican opponents; he leaves them humiliated. So it was for Marco Rubio, who lost his own state, Florida, to Donald Trump on Tuesday night in the Republican primary. As Rubio didn't even bother running again for Senate — reports say that he hates being a senator — this could be the end of his time in public office, at least for now. The defeat was absolute. Florida is a winner-takes-all-state for the Republicans, but it hardly mattered, as Rubio could barely eke out a little more than 1 in 4 Republican votes.

Unburdened by the need to win elections, any election, Rubio issued a concession speech that was an unsubtle rebuke to Trump. "America's in the middle of a real political storm, a real tsunami," he said, concluding sadly, "and we should have seen this coming."

After arguing that "American needs a vibrant conservative movement." Rubio railed, "But one that's built on principles and on ideas. Not on fear. Not on anger. Not on preying on people's frustrations."

Rubio is an empty shell, a robot who mostly runs on programs that his funders and campaign staff input in him. But for a small, sad moment, you saw a bit of the human being lurking under that glib armor. We glimpsed Rubio's soul. A soul really, really hates Trump. One mildly hopes, before he shuffles off into obscurity, Rubio has it in him to preserve his dignity by refusing to support Trump in the general. It would be a small victory, but better than whatever hell Chris Christie is living through now.

For most of Trump's celebratory speech in Florida, it seemed the candidate was going to ignore the controversies of the week, focusing on important-sounding issues like trade that have nothing to do with why his supporters actually love him. But just as a hundred pundits started to type out "pivoting to the general," the real Trump came sneaking out.

"Then Paris happened," he started, crediting terrorist attacks in France and San Bernardino, California for the surge in the polls that made him a contender.

"We need protection in our country, and that's going to happen," he continued. "and then the poll numbers just shot up."

Celebrating mass murder because it boosted your polls might seem an unusual move, but at this point, no one can deny that Trump communes very well with what the most repulsive members of the conservative coalition want to hear. It's not quite pushing him into half the Republican electorate, a fact that he spent much of his speech obsessing over, but those who live in irrational fear of terrorism sure do love him.

That Trump would win the night was largely expected, which is scary enough. But even scarier was the possibility that the events in Chicago, where Trump seemingly manipulated events to create a near-riot, would give his campaign a boost. Trump and his surrogates have been hustling hard in recent days, using the event to argue that they are victims of "thugs" who censor people because of "political correctness."

The narrative seemed like it might be working — one poll showed that Florida Republicans were more likely to support Trump after the violence in Chicago — but in the end, it doesn't seem like it mattered much. RealClearPolitics had Trump polling at 43% going into the Florida primary and he walked away with 46%.   If the stunt swayed any votes in Ohio, which is one of the Midwestern states where racial tensions have been high in recent months, there's no real evidence of it. John Kasich, the governor of Ohio, was expected to win with around 40% of the vote and the polling data shows that, if anything, he did slightly better than expected.

Of course, that's the only state Kasich is expected to win, but in a display of almost mind-bending delusion, he gave a speech, complete with a huge confetti explosion, where he acted like he had the nomination wrapped up.

"We're going all the way to Cleveland and secure the Republican nomination," he yelled, to great applause from an equally deluded audience. Considering that Trump has literally 9 times as many delegates as he does, this kind of confidence seems misplaced.

Kasich is pinning all his hopes on a contested convention, which is only a possibility because Trump can't quite seem to get the majority he needs to win the nomination outright. With Rubio out, Kasich is the last "establishment" candidate in the race, and that designation seems to be the only real evidence he has for this idea that he'll show up at the convention and be able to win over all these delegates in a way that he was not able to win over any voters outside of the state of Ohio.

Kasich ended his speech promising to beat Hillary Clinton. It was an odd note, suggesting as it does that he believes Clinton's delegate lead will lead to the nomination. Not the message you want out if you're trying to push the idea that your opponent's massive delegate lead is a minor obstacle between a candidate and getting the nomination.

And then there is Ted Cruz, who still thinks he has a chance, making a nauseating speech where he reiterated his claim that he's the only reasonable challenge to Trump.

Trump swept most of the states; even Missouri, which was supposed to be the win that reinvigorated the Cruz campaign, was such a squeaker that, hours after the polls closed, the networks were still afraid to declare a winner.

Despite all this, Cruz continues to hope that  a showdown between the amoral capitalist narcissist vs. the slimy and insincere fundamentalist will get him the publicity he needs to start rising in the polls.

Nice idea, but we've seen that movie before. It's called "There Will Be Blood," and if Cruz were the sort to watch movies instead of stare creepily into corners during his down time, he would also know how it ends.

Cruz spent nine months proclaiming that he's the Jesus guy for people who are supposedly too Christian to vote for a thrice-married sleaze like Trump. But, it turns out that those people weren't so much moral as they were just really interested in using "Jesus" as a cover for sexism and racism. Tuesday night, as with most of the election, Trump is doing better with the Bible-thumpers than Cruz, who is supposedly one of their own.

So this is where we sit in the middle of March: A orange-colored frontrunner who is so unethical in his methods he makes Republicans look good by comparison — which is a real trick, I'll tell you what — and two sadly deluded men, one who thinks God wants him to win and the other who thinks the Republican wizard will step out from behind the curtain to fix it all. But it increasingly looks like that savior is not coming out of the sky or any smoky backroom to deny Trump the nomination. The question now is how the Republican party will cope with the realization that this is, after all this time, really happening.