Adam LaRoche's work-life balance: Not just a "mom issue" anymore — but nobody's teen belongs at the office every day 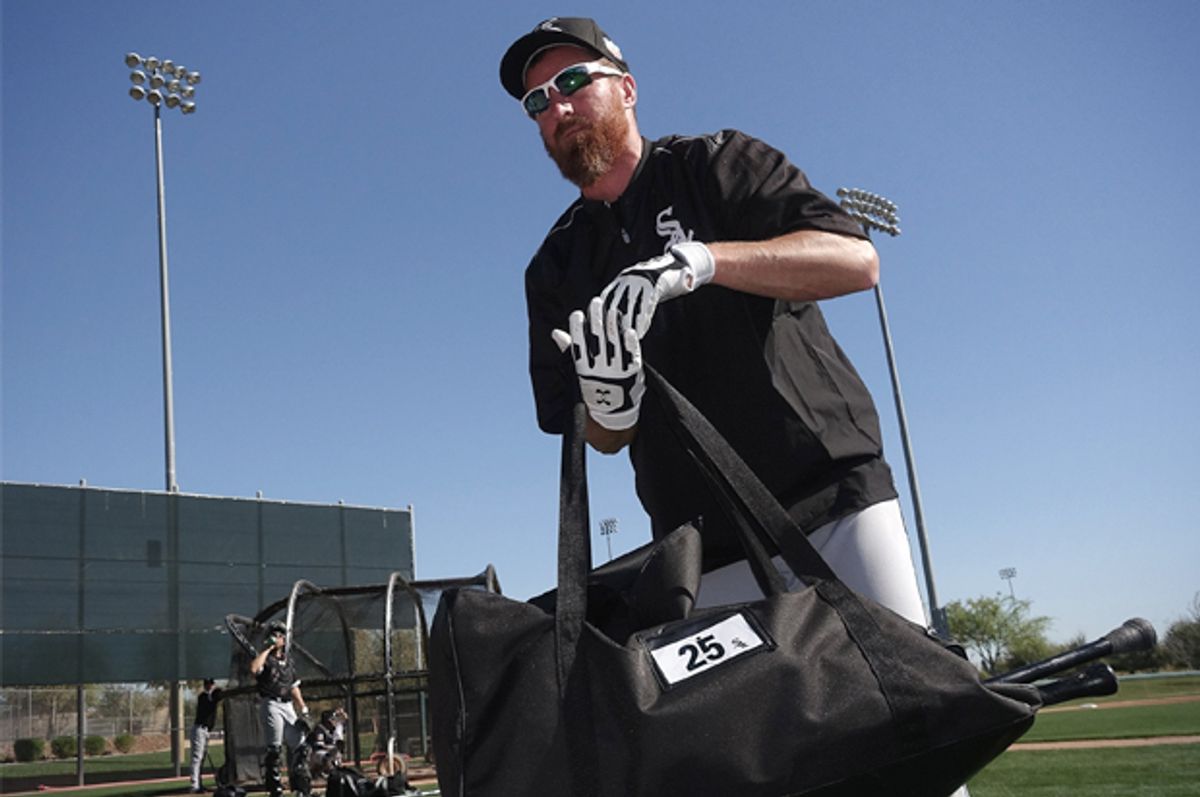 The debate over how to balance work and parenthood is still almost always exclusively couched as a female problem. Leaning in? Having it all? These are treated as mom issues. So let's call it one for equality that Chicago White Sox designated hitter and first baseman Adam LaRoche is reportedly walking away from a season that would have earned him $13 million -- and doing it in the name of family. But is it a smart move, for anybody?

On Tuesday, LaRoche tweeted, "Thank u Lord for the game of baseball and for giving me way more than I ever deserved! #FamilyFirst" The meaning became more clear when White Sox president Ken Williams told Fox's MLB reporter Ken Rosenthal Wednesday that the team had recently asked the 36 year old dad to limit his 14-year-old son Drake's visits to the team clubhouse. "I asked Adam," he said, 'Listen, our focus, our interest, our desire this year is to make sure we give ourselves every opportunity to focus on a daily basis on getting better. All I'm asking you to do with regard to bringing your kid to the ballpark is dial it back.'" He continued, "I don't think he should be here 100 percent of the time - and he has been here 100 percent, every day, in the clubhouse. I said that I don't even think he should be here 50 percent of the time. Figure it out, somewhere in between."

LaRoche's devotion to his son is already well-known. Last year, the Chicago Tribune profiled a "remarkable father-son baseball story," noting that "On game days, Drake LaRoche can often be found inside the White Sox clubhouse, hanging out at his locker or with players watching TV before heading out to shag balls during batting practice." At the time, Roche referred to his son as the team's "26th man." And one can understand the roots of his desire to give his son the privileges of a baseball-centric youth — his own father, former MLB player Dave LaRoche, used to bring him and his brothers to the ballparks during his coaching days with the White Sox. Speaking with the Tribune, LaRoche recalled that "When he was home, he spent as much time with us as possible. That's part of the motivation in bringing Drake in as much as I do." Both Drake and his sister Montana have had an arrangement that enables them to go to a regular school in Kansas when they're at home, but do homeschooling on the road. Of his daughter, LaRoche said last year that "It's unfortunate she can't come [into the clubhouse]. That's thousands of hours of time we missed together, and Drake and I get to spend it together."

This year, Drake had already been "with the team for many games and much of this spring," according to the Tribune. ESPN notes that the boy was always considered a "welcome addition to the group," but it adds that unlimited access for any family member of a player is "unprecedented." And on Tuesday, there reportedly was a nearly two-hour meeting among players to discuss the young man's presence, and LaRoche's choice to retire. "I'm confident," LaRoche said, "I am stepping away from baseball." Tribune writer David Haugh speculates, however, that LaRoche may have been looking for an out anyway after a dismal last season, and adds, "Take Your Daughters and Sons To Work Day is April 28, not the entire 2016 baseball season."

In his statement, Williams stressed that the issue was not the boy himself, whom he says "everyone loves." It was instead a question of, "You tell me, where in this country can you bring your child to work every day?" And as the Sporting News put it, "Unless Williams and manager Robin Ventura were OK extending that privilege to everyone — the privilege to bring your child to your workplace every single day for a limitless amount of time — he had to go."

Speaking with the Tribune this week, Lindsay Pinchuk of the parenting networking group Bump Club and Beyond said, "Unfortunately, we live in a society where kids just aren't welcome in the workplace on a regular basis. I think it has a lot to do with staying focused and being an appropriate environment for a child or a teenager." But while ideally any workplace can make accommodations for individual families and their needs, it's also not "unfortunate" that kids aren't in our places of work — whether those places are an office cubicle or surgical suite or baseball clubhouse — on a "regular basis." It's not unreasonable to say that as great as any one kid may be, a person's adult colleagues are entitled to a space in which they can focus on their tasks and responsibilities without having to consider the presence of a minor in the room. And an employer should not have to worry about the precedent set when one employee wants his or her child in their place of business on an unlimited basis.

LaRoche, meanwhile, is apparently sticking steadfast to his choice. And now, looks like he'll get to spend more quality time with both of his children.