After joking about his murder, Lindsey Graham endorses Ted Cruz: "He is certainly not my preference"

"That ain't happen," Graham joked about backing Cruz days ago. But on Monday, he'll fundraise for Cruz at AIPAC 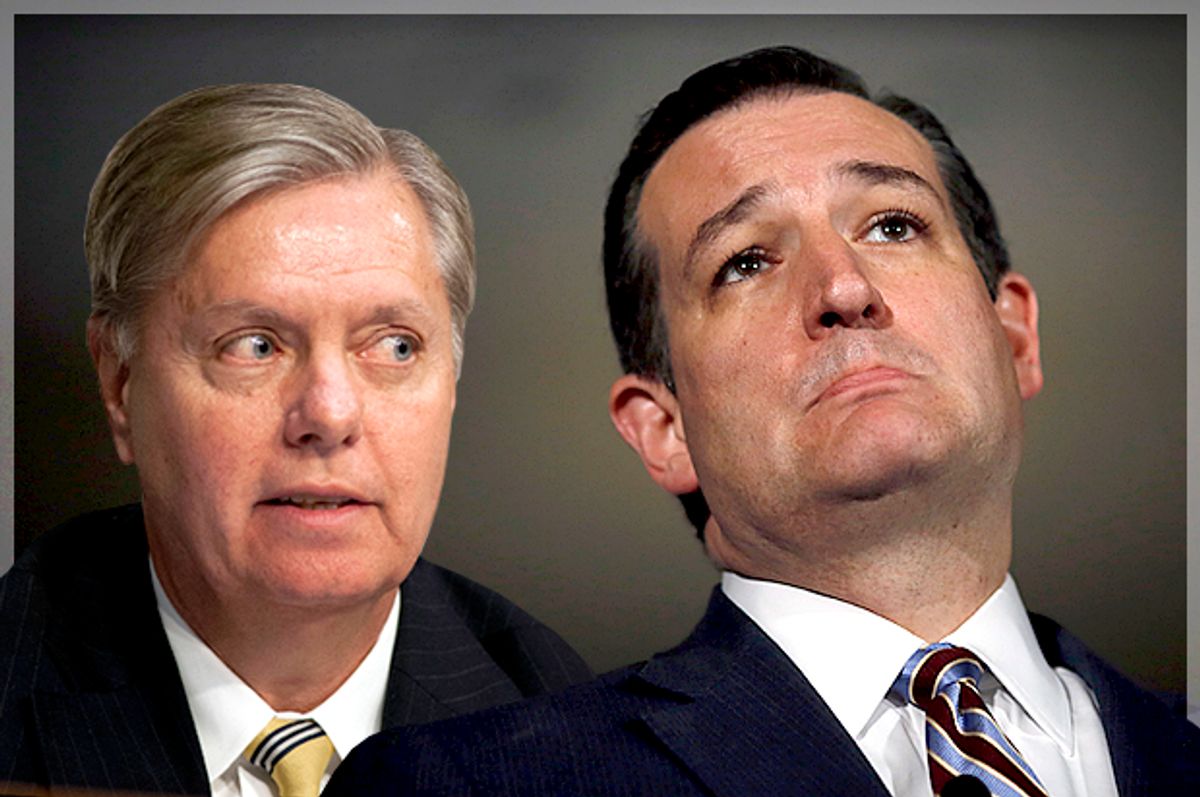 "If you killed Ted Cruz on the floor of the Senate, and the trial was in the Senate, nobody would convict you," South Carolina Senator Lindsey Graham joked last month, describing the level of disdain the Tea Party Texan has drawn from his own colleagues in Congress. Despite his personal distaste for Cruz, however, Graham will host a fundraiser for on behalf of one of the last remaining Donald Trump challengers in Washington, D.C. next week, according to CNN.

Graham is hosting a "meet-and-greet" to benefit the Cruz campaign at the annual gathering of the pro-Israel lobbying group, AIPAC, next Monday. Graham told CNN's Dana Bash that although Cruz is not his preference -- Graham initially threw his support behind Jeb Bush after watching his own presidential ambitions fail to launch well before the South Carolina primary -- the unabashed war hawk said he believed that Cruz "would be a more reliable partner for Israel."

Graham called the Republican frontrunner a "disaster for the party" and indicated his newfound support for Cruz is merely a means to block Trump from securing the nomination. “A good Republican would defend Ted Cruz after tonight,” Graham admitted last month, after Trump gave another blustery debate performance that embarrassed many in the establishment. “That ain’t happening.”

“I was asked the hardest question in my political life," he continued. "Do you agree with Donald Trump that Ted Cruz is the biggest liar in politics?” he said, “too close to call.” Graham has in the past compared the choice between Trump and Cruz to picking between "being shot or poisoned.”

The Cruz campaign has already warned that the candidate plans to use his address to the pro-Israel lobby to "highlight Trump's positions -- or lack thereof -- in front of the thousands of AIPAC members in attendance." Trump forced the cancellation of Monday's Fox News debate, citing his attendance of AIPAC.

Watch Graham twists himself into knots to explain why he's suddenly had a change of heart on Cruz:

Here is the best 1:19 of the week: Watch Lindsey talk on CNN about why he's fundraising for Cruz: https://t.co/xDWHL0r9ZY