The Tillys were so inspired by Trump, they volunteered for him — oh, and they have neo-Nazis tattoos 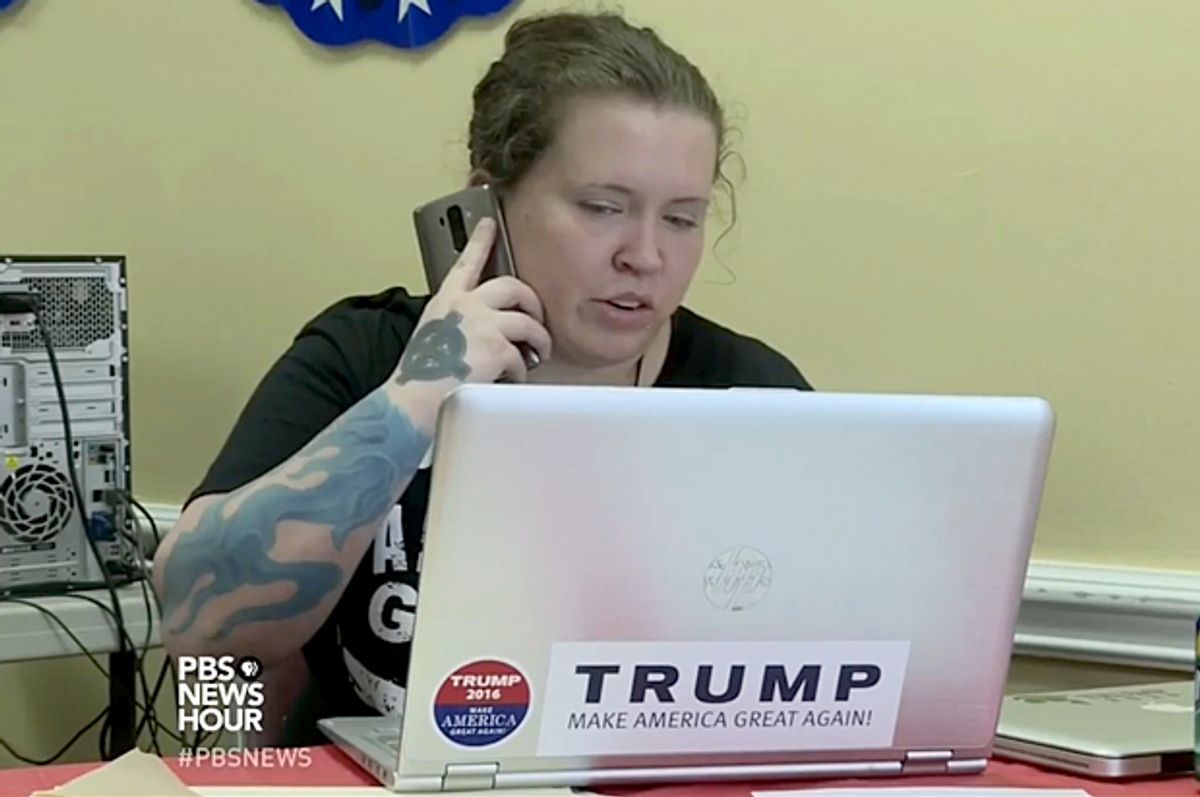 Ahead of Tuesday's primary elections in North Carolina, PBS Newshour aired a segment featuring Grace Tilly, a North Carolina-native who was so inspired by Donald Trump's unique populist message as to finally vote for the first time, at the ripe age of 33.

Grace — along with her husband (Farron), father-in-law (Pete), and son — campaigned for Trump in Fayetteville, the same town where a 78-year-old hillbilly sucker-punched a protester at a Trump rally less than a week earlier.

Pete Tilly, who was born in Montreal, supports Trump for his nativist immigration policies.

"In today’s society, it’s like we cater to the people, whatever language they speak," Pete Tilly said. "I came in the States, I joined the military, and then I even went and got naturalized, and I’m very proud to say I’m an American citizen."

Grace's 11-year-old son is even on the Trump train, saying, "No other candidate stands up for Americans like Donald Trump."

Political leanings aside, the story of a multi-generational, civically-minded family has an appealing hint of Americana.

And even the most straight-edged can look past Grace Tilly's prominent hand tattoos. Unless ... pause the video. Is that Odin's Cross? Like the one from that episode of "Gangland" about Skinheads?

Yes, it appears so — Trump had, at least, one white supremacist phone-banking on his behalf in North Carolina.

Armed with the knowledge that father-in-law Pete is apparently at most one degree of separation away from white supremacism, his strict immigration policy begins to make a lot more sense:

"All these protesters and all this stuff, and people saying he’s racist, and then the Black Lives Matter, you know what? Red lives matter, because, when you bleed, we all bleed red."

It's hardly surprising that, beyond passive endorsements, neo-Nazis are actually investing sweat equity in Trump 2016. What's more surprising, though, is Gawker picked up on the nationalist hand tattoos (on her left hand, Grace has an "88," apparently a stand-in for when the requisite surface area isn't available to inscribe "Heil Hitler") before, presumably, several rounds of PBS staffers green-lit the segment.

PBS posted an update on their original write-up of the profile, relaying Tilly's subsequent claim "that these tattoos are not representative of neo-Nazi positions but are connected to her family’s Celtic religious beliefs," which, of course, in no way accounts for the "88" tattoo.