Hillary Clinton doesn't get it: Paul Krugman, Bernie Sanders and the truth about the free trade scam 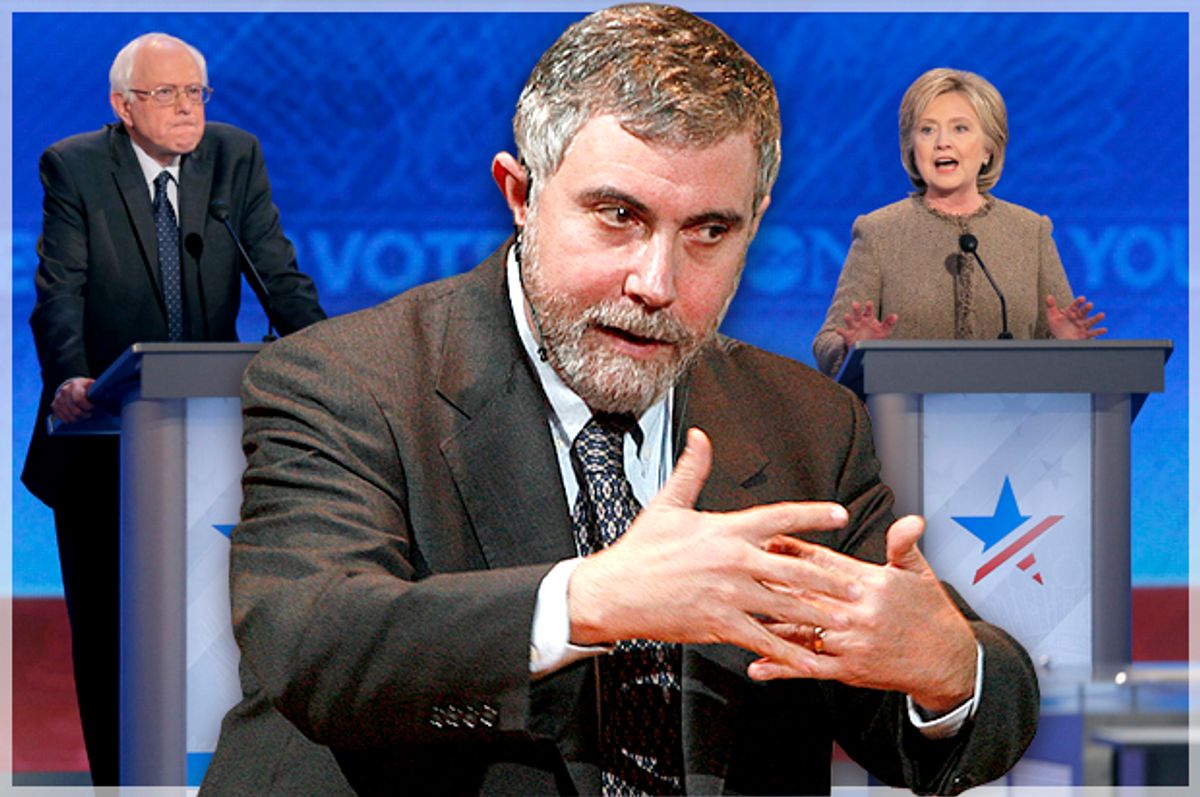 In the wake of Bernie Sanders stunning upset victory in the Michigan primary, there's a renewed recognition that the negative impacts of global trade matter—a  lot. There's still a broad assumption Clinton will easily win the nomination, but there's been some talk that she might consider Sherrod Brown, Ohio's staunchly anti-”free trade” senator as her running mate. And of course, as the New York Times dwells on, Clinton is “sharpening” her “message on jobs and trade.”

But Michigan matters not just for Clinton, but for the Democratic Party as a whole. And it's going to take much more than sharper messaging to actually make a difference in people's lives. It's not just a matter of changing policies around the edges—as Clinton now says that she wants to do—the entire corporate-dominated policymaking process that produces such deals needs to be done away with, and replaced with something far more open, democratic and informed by long-term realism. And that can only happen through a mobilization of political will—or as Sanders would call it, “a political revolution.”

Clinton's messaging shift is a good indication of how far the establishment is from grasping what's actually needed. As the Times notes, she's always been upbeat in the past, stressing “inclusiveness,” as the neoliberal lexicon would have it:

“I want to be the president for the struggling, the striving and the successful,” she often said.

But now, she's signaled a change:

It's a characteristically breathtaking move on Clinton's part. It sounds great, of course. But how can she be a president for the struggling and striving when she's so out of touch with them that she's been blindsided by the brokenness of their dreams? There's so much more than messaging that needs to be adjusted here. As Paul Krugman now admits, “much of the elite defense of globalization is basically dishonest.... So the elite case for ever-freer trade is largely a scam.”

Just as Clinton, the candidate, was so disconnected from public anger, and the objective suffering it springs from, the entire policy apparatus around trade has for years been totally disconnected from virtually anyone outside of the corporate sector.

That might sound hyperbolic, but it's quite literally true. Last year, when an early Senate vote on the Trans Pacific Partnership was about to be held, the Intercept explained that “Even members of Congress can only look at it one section at a time in the Capitol’s basement, without most of their staff or the ability to keep notes.” Hence, the only way the public knew what was in the TPP ahead of time was through Wikileaks. Things were different for our corporate overlords, however:

But there’s an exception: if you’re part of one of 28 U.S. government-appointed trade advisory committees providing advice to the U.S. negotiators. The committees with the most access to what’s going on in the negotiations are 16 “Industry Trade Advisory Committees,” whose members include AT&T, General Electric, Apple, Dow Chemical, Nike, Walmart and the American Petroleum Institute.

As an illustration of how this works, the Intercept noted:

[T]he Energy and Energy Services committee includes the National Mining Association and America’s Natural Gas Alliance but only one representative from a company dedicated to less-polluting wind and solar energy.

The fundamental problem here is not the trade deals themselves—horrendous as they may be (more on that below)—but the super-secretive policy apparatus that produces them, the norms by which it functions, and the comfortable cluelessness with which it's accepted as perfectly normal, if not axiomatically unquestionable, by our governing elites—both here in America and around the world.  It's all done in the name of “free trade,” of course, but the corporate-dominated reality just described is closer in spirit to the mercantilism of the pre-Adam Smith era..

To see just how ludicrous the “free trade” label is, consider the beginning of this brief post from economist Dean Baker, writing at the world's oldest blog:

Hey, can an experienced doctor from Germany show up and start practicing in New York next week? Since the answer is no, we can say that we don't have free trade.

Protectionism is the rule when it comes to high-income professions, as Baker has been pointing out for years. In fact, it's gotten stronger. And not just for professions, of course:

We also have strengthened patent and copyright protections, making drugs and other affected items far more expensive. These protections are also forms of protectionism.

The thing is “free trade” sounds so good ... so free!  It's definitely good messaging. No? Well, not if you're trying to think straight, in an effort to design policies that actually work. And that's the real challenge that Democrats face—whichever candidate's side they are on just now. Because the problem's not going to go away any time soon. That problem is much harder for Clinton precisely because she's so deeply wedded to the system as it currently exists. Even if she genuinely wanted to start fixing things, how could she possibly proceed? But given the sorry state of Democratic Party as a whole, it's going to be very challenging for Sanders as well.

After Sanders' upset win in Michigan, there were a number of predictable responses, portraying Sanders' views as simplistic—much like Donald Trump's, get it?—such as this from Washington Monthly's blog, pointing out that Michigan's industrial decline started well before NAFTA—as anyone who's seen "Roger and Me" knows very well. But this kind of analysis, though historically well founded, is nonetheless off-base: The real-world challenge is not uprooting historic wrongs, but struggling against current wrongs and preventing future ones. NAFTA still matters because the damage it's done is still ongoing, it's been replicated, and the mechanisms driving it have spread, not because anyone thinks it's the sole source of problems in Michigan or anywhere else.

In late 2013, just before NAFTA turned 20, Jeff Faux, founder of the Economic Policy Institute, wrote an assesment of what NAFTA had meant. He called it “A Template for Neoliberal Globalization,” and highlighted four main ways it had impacted American workers:

First, it caused the loss of some 700,000 jobs as companies moved their production to Mexico, where labor was cheaper....

Third, NAFTA drove several million Mexican workers and their families out of the agriculture and small business sectors, which could not compete with the flood of products—often subsidized—from U.S. producers. This dislocation was a major cause of the dramatic increase of undocumented workers in the United States....

Fourth, and ultimately most importantly, NAFTA created a template for the rules of the emerging global economy, in which the benefits would flow to capital and the costs to labor. Among other things, NAFTA granted corporations extraordinary protections against national labor laws that might threaten profits, set up special courts—chosen from rosters of pro-business experts—to judge corporate suits against governments, and at the same time effectively denied legal status to workers and unions to defend themselves in these new cross-border jurisdictions.

Although all four of these impacts were devastating, the last one is what's most important going forward. It's what's animating the TPP process and every other trade agreement in the works. So long as trade rules are written by the corporations, for the corporations, the rights, the dignity and the self-determination of the American people are all fundamentally threatened.

In fact, a surprising range of Obama's political legacy will be put at risk if the TPP is approved—as explained by Public Citizen's Global Trade Watch division just before Obama's last State of the Union.

It threatened President Obama's legacy on the climate change and the environment:

The environmental groups that have celebrated Obama’s achievements with the global climate treaty and his decision to the stop the XL Pipeline call the TPP an act of “climate denial.” ….  Environmental groups listed on the White House website as supporting the deal, including NRDC and Defenders of Wildlife, in fact came out in opposition after seeing the final text.

The TPP would threaten the president’s successful rescue of the U.S. auto industry and thousands of U.S. jobs. It would allow vehicles comprised mainly of Chinese and other non-TPP country parts and labor to gain duty free access....  Ford has supported all past U.S. trade deals, but opposes the TPP.

[I]t decided to allow Brunei to remain in the TPP even after the country announced that it would begin stoning to death gays and single mothers under new sharia-based laws. This has led to LGBTQ groups joining the TPP opposition.

The TPP could help banks unravel the new rules Obama achieved on Wall Street by prohibiting bans on risky financial products and “too big to fail” safeguards while empowering foreign banks to “sue” the U.S. government over new financial regulations.

Why would President Obama put so much of his legacy at risk? The simple answer is, we don't know. Perhaps he doesn't think the threats are real—unlike those who are most directly endangered by the risks. If the TPP process were open and democratic, there would have been an opportunity to dialog, and at the very least gain some understanding of Obama's thinking. At most, his thinking could have been fundamentally changed. But neither possibility existed in the secretive backroom process that's been normalized under neoliberalism's rules. And that's what's got to end.

This profound disconnect gets to the very heart of what America's trade problems are all about—a fundamental lack of democratic governance over a realm of law and policy that increasingly shapes the landscapes of our daily lives as the world grows ever smaller, ever more interconnected.

It's not just Obama, of course. Most of the Democratic Party establishment seems to accept this situation, even if they may not go along with any one particular trade deal. Hillary Clinton now says that she opposes the TPP, whereas she previously referred to it as “the gold standard.” What's changed? Who knows? No one, apparently, has asked her. But she clearly didn't have a problem with the process, or she would have objected to it long ago—just as Bernie Sanders did.

Clinton tries to spin her late decision as more thoughtful, more nuanced, more deliberative. But given that the process itself is so profoundly flawed—secretive, anti-democratic, dominated by corporate special interests—there's every reason to see Sanders' position as being both more principled and more thoughtful, more penetrating in terms of grasping what the real issues and problems are.

One further point needs to be added here. In describing why elite defenses of globalization were a scam, Krugman noted:

[T]he conventional case for trade liberalization relies on the assertion that the government could redistribute income to ensure that everyone wins — but we now have an ideology utterly opposed to such redistribution in full control of one party, and with blocking power against anything but a minor move in that direction by the other.

In short, you need Bernie Sanders-style democratic socialism in order for honest pro-globalization arguments to work!

This is not just a primary campaign question between these two candidates. The entire Democratic Party needs to fundamentally rethink what its trade policy should be. As it now stands, the party simply accepts that trade agreements are written secretly behind closed doors by government officials from different countries consulting with lawyers and lobbyists from (mostly transnational) large corporations. The interests of the American public in general (or any other public around the world) simply don't enter into the process. There are no labor, environmental, public health or consumer advocates involved. It's understandable why the GOP might like such a system. It's beyond belief that the Democratic Party has never even seriously questioned it. The time to start questioning it—seriously—has finally arrived. And the time for action is next.