Lindsey Graham buries the Republican "rebrand": The GOP officially gives up on expanding its demographic appeal 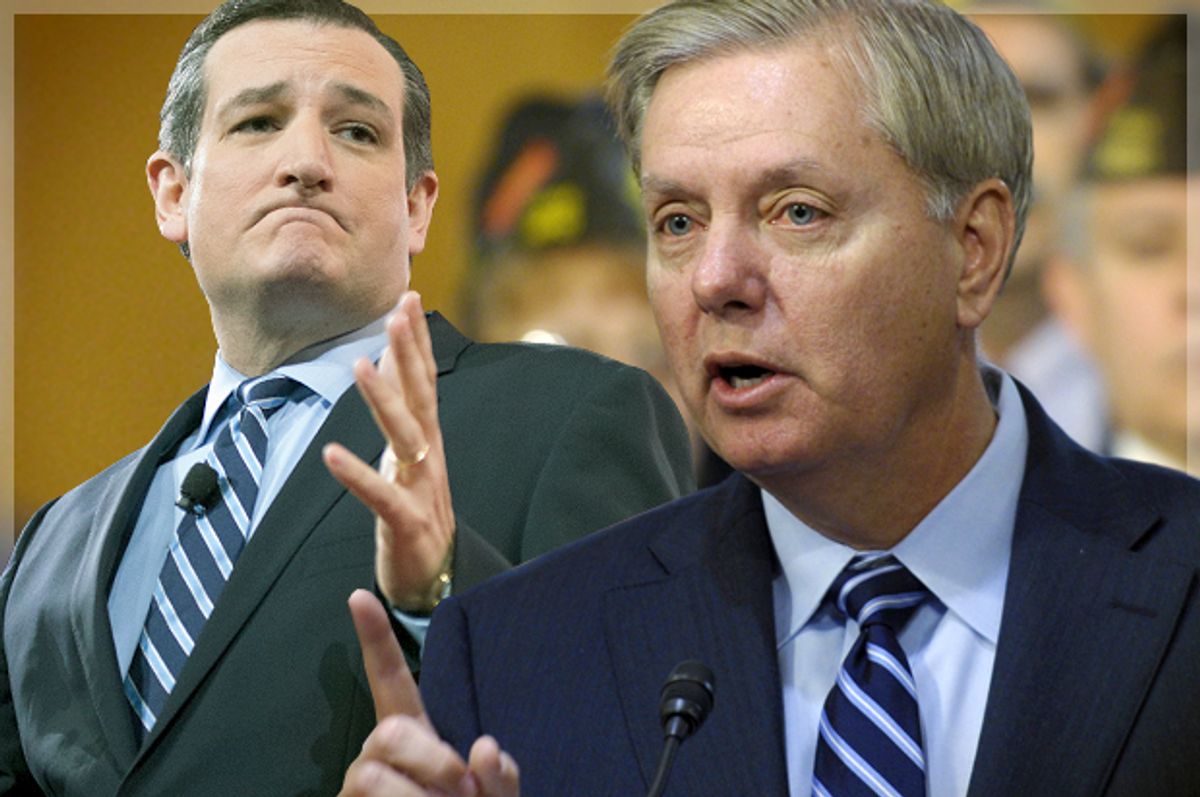 Lindsey Graham’s endorsement of Ted Cruz for the presidency represents a new low point for Republicans who dreamed of rebranding the party following the 2012 elections. As you probably recall, the drubbing Mitt Romney received in 2012 was powered in no small part by Latino voters, who rejected Romney’s “self-deportation” stance and sent him packing with a paltry 27 percent of the Latino vote. In the aftermath of Mitt’s defeat, the Republican establishment came to the sudden, sobering realization that an increasingly diverse electorate posed massive demographic problems for the party at the national level, and it whipped together a plan to expand the GOP’s appeal beyond older, white voters.

On the other side of the argument stood Ted Cruz, who disregarded the warning of demographic death spirals and did pretty much everything he could to sabotage the legislation in the Senate. After it passed, he turned his attention to the House, meeting with key anti-immigrant lawmakers to strengthen opposition to the bill. Graham’s immigration bill died a slow death by attrition in the House, which eventually gave in entirely to the hardliners and began passing legislation cracking down on undocumented immigrants ahead of the 2014 midterms. Rather than warding off Graham’s “demographic death spiral,” the House GOP and Ted Cruz took active steps to invite it.

And it’s hard to conclude that Cruz and his buddies have been anything but successful in that regard. Republicans warn that Donald Trump has historically high unfavorable ratings with Latino voters, but Ted Cruz’s standing with those same voters isn’t anything to brag about. A recent Washington Post/Univision poll found that Cruz’s net approval rating with Latino voters is five points underwater. In a hypothetical matchup against Hillary Clinton, Cruz would take 27 percent of Latinos – the same miserable showing Mitt Romney put up in 2012. An overwhelming majority of Latino voters, 82 percent, want the next president to support a path to citizenship for undocumented immigrants, something Ted Cruz loudly opposes. The draconian anti-immigrant positions advocated by Donald Trump have forced Cruz to be even more strident in his own anti-immigrant posturing as he tries to poach voters from the insurgent frontrunner.

Republicans like Lindsey Graham who want to expand the party’s reach are faced with a choice between two candidates who are either widely disliked or actively loathed by one of the fastest-growing voter demographics in the country. There is no good choice in this situation, but Cruz represents the slightly less bad choice, and so Graham is gritting his teeth and joining up with Cruz. The Republican establishment’s plan to broaden the party’s demographic appeal died a long time ago, and it was Ted Cruz who helped to kill it. By endorsing Cruz over Trump for the presidency, Lindsey Graham has thrown the last shovel of dirt on the Republican rebrand’s corpse.