Right-wingers still in denial about the Oregon militiamen: New video proves they were villains, not martyrs

Video from inside Lavoy Finicum's truck shows he was courting death, but the right will still make him a martyr 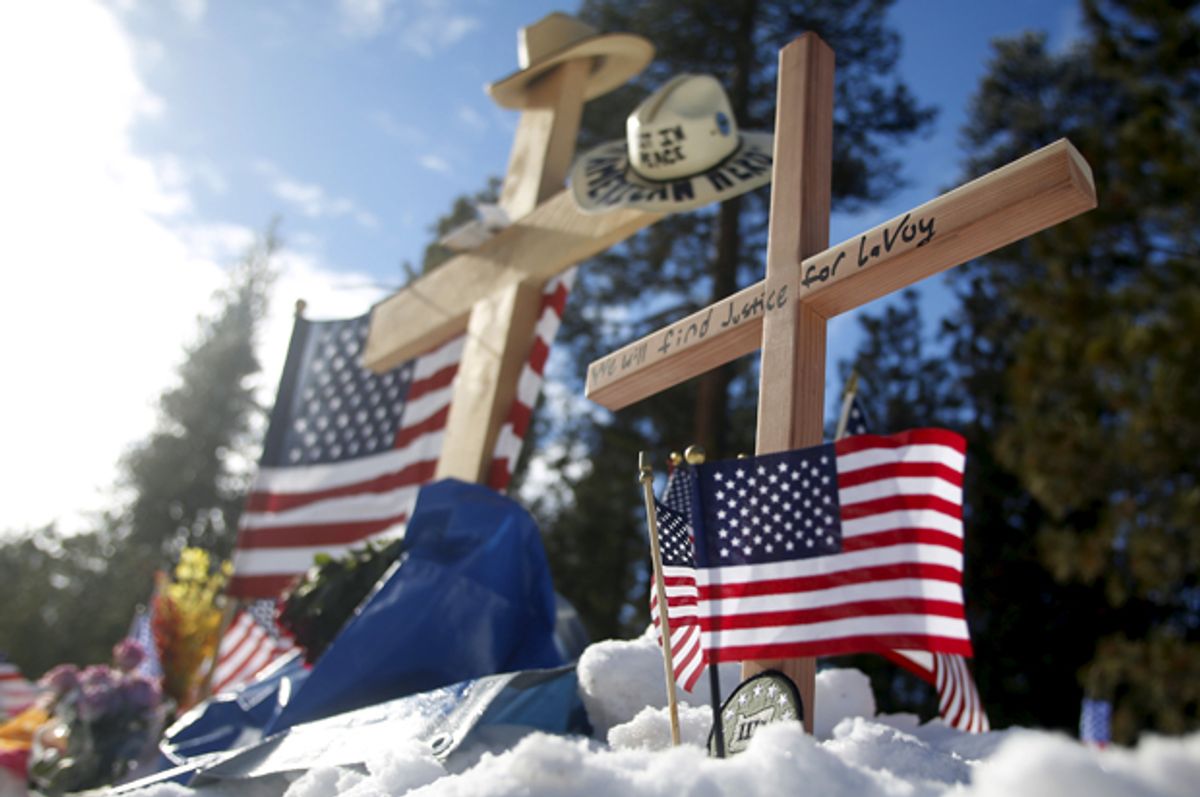 A memorial for Robert 'LaVoy' Finicum on a highway north of Burns, Oregon, January 31, 2016. (Reuters/Jim Urquhart)
--

Even though the occupation of the would-be militiamen who took over a wildlife refuge in Oregon ended a month ago with a whimper instead of a martyr-producing bang, that doesn't mean that the right-wing fringe isn't still trying to turn this into the next Waco, to be lovingly obsessed over to stoke their victim complex. Now new video out shows this issue is not going away anytime soon.

Robert "LaVoy" Finicum did get shot after FBI agents ambushed the occupiers flagrantly left the protection of the wildlife refuge to drive over an hour away to a community meeting. He is a piss-poor martyr — a taxpayer leech whose supposed hatred of government didn't stop him from housing foster kids for money and then making those kids do unpaid labor on his ranch — but he's the only one they've got, so the fringe right has been riding his death as hard as they can in hopes of establishing themselves as the victims here.

The hopes for turning Finicum into a martyr rest on the possibility that a couple of bullets that were fired by FBI agents, but did not hit him, before he reached for his waistband in what was a clear "reaching for the gun" gesture that led to the police killing him*. Originally, the militia movement pushed the notion that Finicum did not reach for his gun and was shot with his hands up. (No big surprise that an unsubtly racist movement would "borrow" the imagery from the Black Lives Matter movement's slogan "Hands Up, Don't Shoot" to argue that they're the "real" victims here.)

That didn't pan out, as the FBI immediately released an aerial video showing that Finicum did reach for his waistband, where he apparently had a gun. So the narrative changed to arguing that the FBI shot before Finicum reached for his gun.

Unfortunately for the FBI, there is some evidence for this. There's a Justice Department investigation into the possibility that not only were shots fired unnecessarily, but that FBI agents conspired to hide the evidence. Earlier this week, video from inside of Finicum's truck, filmed by militia member Shawna Cox, bolsters the argument that FBI agents took shots before Finicum reached for his gun.

"Cox's video showed that one shot hit the truck's left rear passenger window as Finicum stepped out," Les Zaitz of the Oregonian writes. "At the time, Finicum appeared to have his hands at least at shoulder height." You can watch the video for yourself:

That said, this video does as much to damage right-wing militia cries of martyrdom as it does to bolster it. When combined with the aerial footage, it paints a picture of Finicum as someone who is violent and reckless at best, and quite possibly out to get himself (and possibly others) killed. When the video starts, Finicum is taunting law enforcement, daring them repeatedly to kill him. Inside the truck the militia members discuss whether they can get away with just taking off, and it's clear that they are aware of the FBI's desire not to create martyrs, and see this as evidence that they can just get away scot-free.

"We have kids in here," you can hear a woman, likely Cox, saying as they contemplate whether to take the risk that law enforcement is too afraid of bloodshed to open fire. Finicum then throws caution to the wind and takes off, not getting far before running his car into an embankment and nearly running over an FBI agent in the process.

Overall, the impression you get from the video is that Finicum is somewhere on the scale between eager to get some violence going and outright committing suicide by cop. Everyone else in the car seems delusional, like they can't quite grasp this isn't an action movie where they, the heroes of their own story, escape unscathed. It's only when the truck crashes and the police kill Finicum that reality sets in, as one woman (the 18-year-old "kid" that Cox was referring to) screams her head off as the horror of what's happening sets in.

So while the FBI agents likely did pull the trigger too quickly, overall, it's impossible for an honest viewer to conclude that Finicum is anything but the villain of this story, a man so lost in his delusions of himself as a revolutionary that he deliberately chooses to end this episode with violence instead of surrender. That he puts the life of a teen girl in danger while doing it only reinforces the sense that he was anything but a martyr.

Not that any of this will slow down the attempts by fringe right wingers to continue building Finicum up as if he were a peaceful man cut down for no reason whatsoever, their version of MLK. What was clear from day one of this Oregon standoff was that its main purpose was creating martyrs for the movement.

The FBI frustrated and denied that desire at every turn, refusing to escalate and making it clear, as the days went by, that the would-be martyrs weren't quite ready enough to die that they were going to start the violence. Denied the narrative that they were looking for, militia groups and their followers are going to try to pound Finicum into the mold of the innocent martyr, no matter how ill-suited his death was for the story.

The sad truth is that right-wing terrorist and militia groups are likely not going away anytime soon. If anything, there will probably be a surge of this activity starting next year. Odds are increasingly high that the presidential election will be Hillary Clinton v. Donald Trump and that Clinton will win. There's just no way that fringe right-wing groups will react well to seeing a candidate who speaks directly to their paranoia and racism lose to a woman. The sense that they need to "take the country back" and that they are being oppressed by feminists and people of color is going to be just as strong as it was under a black president. Possibly worse.

The lesson here is that federal authorities need to be even more cognizant of the need to deny the movement its martyrs. There's no point in arguing whether or not an attempted vehicular assault by Finicum justified shooting first. The reality is that if they shot first, the FBI gave the right wing fringe the thread of justification for their victim complex that they will cling to for dear life. Overall, the FBI showed the value in restraint, and this incident shows why even letting go of it for a moment can cause the whole thing to unravel. Under President Clinton, the lessons about restraint over overreaction will only become more necessary.

*Correction: The original version of this story stated that FBI agents killed Finicum. Investigation shows that while the extraneous shots were fired by FBI, it was state police that fired the fatal shot. The article has been updated to reflect this information.