The CNN analyst blames protests on the "violent left," while Fox News celebrates St. Patrick's Day as only it can 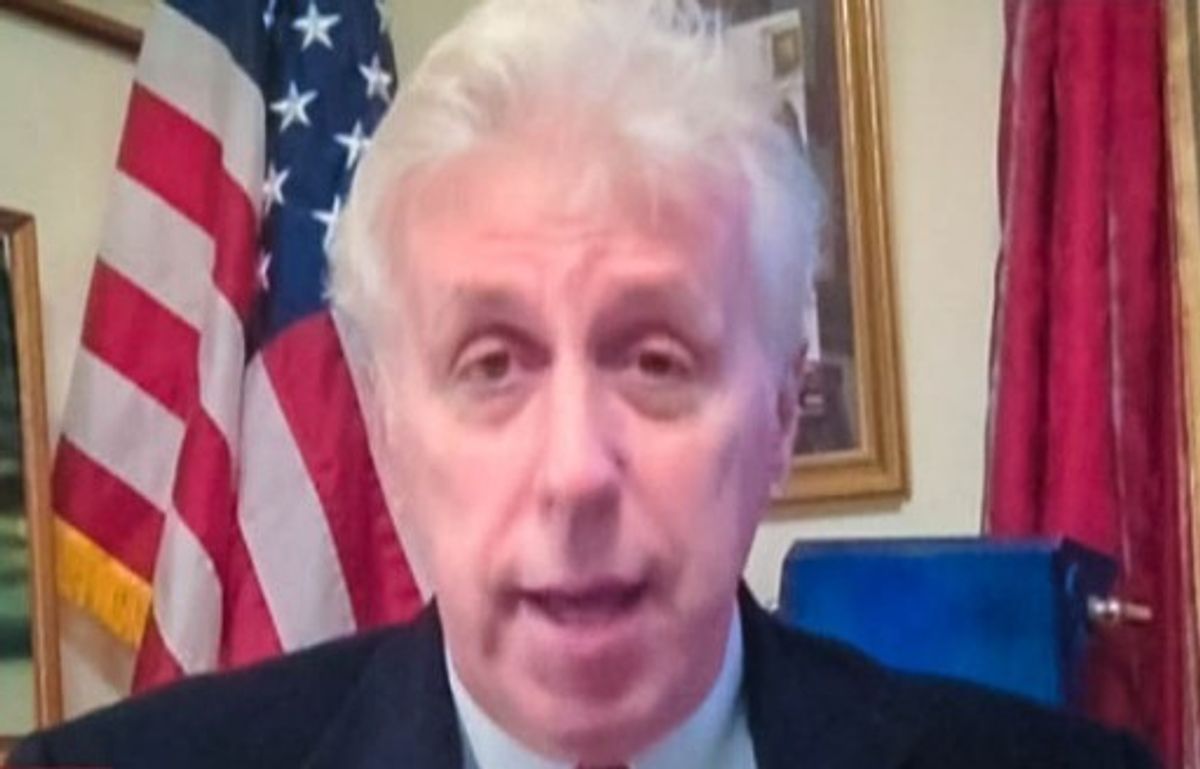 As anti-Trump protesters gathered in New York and Arizona, Donald Trump continued his petty spats with Megyn Kelly and Mitt Romney. Because that seemed really important to him, and he never forgets a slight.

The candidate continued his mostly inane babbling on the campaign trail, questioning Mitt Romney's Mormonism for no apparent reason except that it popped into his free-associating mind, and asserting that he talks to himself for advice on foreign policy because he has "a very good brain." Meanwhile, his insane spokespeople, Katrina Pierson and Jeffrey Lord, just kept saying things that had everyone scratching their heads. Seriously, WTF is wrong with these people?

1. Jeffrey Lord: These peaceful protests are obviously part of the violent left.

While conservative commentators like Bill O’Reilly are doing all they can to demonize protesters at Trump rallies, Lord has been taking it to a new level. In a piece in this week’s American Spectator titled "Meet MoveOn.org: The New KKK," Lord wrote, "This time around they don't use hoods and burning crosses to rally the terrorists, they use social media instead."

It does lead one to suspect he is unfamiliar with the fact that the KKK terrorized and murdered people.

While covering the anti-Trump protest, CNN’s Fredericka Whitfield asked the network’s highly sensible go-to Trump guy for comment. Lord started by calling himself a “First Amendment freak.” Then, over footage of peaceful protestors in Arizona, he said the protestors weren’t the nice kind with First Amendment rights, they were the “violent left” who, like Black Lives Matter activists and the anti-Vietnam war movement, just like to protest any old thing. "The subject always changes,” he said. “What I'm talking about here is what I call the violent left in action."

Wait, he does know that viewers can actually see the picture behind him, doesn’t he?

2. David Duke: Donald Trump could be good for Hitler’s reputation.

Among the other public services Trump’s candidacy has provided is making David Duke feel relevant again. After Duke backed Trump, and Trump took a couple of days to decide that having white supremacist KKK-backing was maybe not a good look, Duke has stood by Trump. And he is taking advantage of his new round of fame to promote his other favorite guy, Hitler.

This week, Duke, a former representative for the good people of Louisiana, rambled thusly:

“I saw a commercial against Donald Trump, a really vicious commercial, comparing what Donald Trump said about preserving America and making America great again to Hitler in Germany preserving Germany and making Germany great again and free again and not beholden to these Communists on one side, politically who were trying to destroy their land and their freedom, and the Jewish capitalists on the other, who were ripping off the nation through the banking system.”

Duke’s tortured logic finally reached the conclusion that just as (some) Americans were realizing that the Jewish-controlled media was engaged in a conspiracy against Trump, they might develop more of a soft spot for that other much-maligned guy, Hitler.

3. Donald Trump gave the most laughably absurd answer to this question.

Trump phoned into his good friends at "Morning Joe" for a little chat this week. Mostly, they try to give him pretty easy questions since that's what he has told them he prefers. Then this exchange happened:

Donald Trump: I’m speaking with myself, number one, because I have a very good brain and I’ve said a lot of things. In fact, in my book, in 2000, I talked about Osama bin Laden, and I do remember someone put the book in front of Joe who said, "No way he talked about Osama bin Laden before the World Trade Center came down," and they said "No, he really did," and I remember Joe looking at it and saying "That’s amazing." So I know what I’m doing. I talk to a lot of people and at the appropriate time, I’ll tell you who they are. My primary consultant is myself and I have a good instinct about this stuff.

After a little more rambling, and some attempts by Mika and Joe to interrupt him with another question, which they appeared to have trouble getting out due to their extreme flabbergasted state, Trump said, “We have to take ISIS out,” and that he “would consult with the best people about ISIS,” by which we assume he means himself and his very good brain which says a lot of things.

Fox News’ “The Five” celebrated St. Patrick’s Day by attacking as many other ethnic groups as they could. Greg Gutfeld lamented the fact that you can’t make fun of Mexicans, for instance. “If you throw a Mexican party, like a fiesta and wear a sombrero, you’re in big trouble — a Cinco de Mayo party, for example,” he said. “But you can do whatever you want and actually use stereotypes that are kind of damaging [to Irish people].”

Juan Williams tried to inject some intelligence and sensitivity into the discussion by pointing out some actual history about discrimination against Irish people, and that their struggles led to some of the country’s immigration reform, and then placing it in the context of today’s immigrants. Silly Juan. Thoughtful analysis has no place at Fox.

“But the Irish got over it,” Kimberly Guilfoyle interjected irrelevantly. “They don’t run around going, ‘Irish Lives Matter.'”

5. Should this GOP lawmaker get points for honesty or is he just an a**hole?

A freshman lawmaker in Mississippi (yeah, a Republican) by the name of Karl Oliver received an email from a constituent named Becky Guidry who expressed concern about some tax breaks being considered by the state legislature. Guidry was apparently concerned that handling a budget crisis by giving out tax breaks seemed a bit counterintuitive. A mother of school-age children, she was also worried that such a move would leave a shortfall in funds for public education, which it probably would and often does.

Oliver emailed her back (points!) and suggested she leave the state (no points!).

"I see you are not a native to the Great State of Mississippi nor do you and I have similar political views," he wrote her in an email that she shared with the local paper. "The people of our Great State overwhelmingly share my same or similar views on Government responsibility. I appreciate you going to the trouble to share yours with me, but quite frankly, and with all due respect, I could care less. I would, however, recommend that there are a rather large number of like minded citizens in Illinois that would love to see you return."

When he was asked about the email by the local paper, Oliver snapped, “This isn’t news,” indicating that he doesn’t understand the news business any better than the business of public service.