America is overdosing on religion: How the presidential election got taken over by theocrats and zealots

From the Islamophobia of Donald Trump to everything about Ted Cruz, this is getting bad. And Dems aren't immune 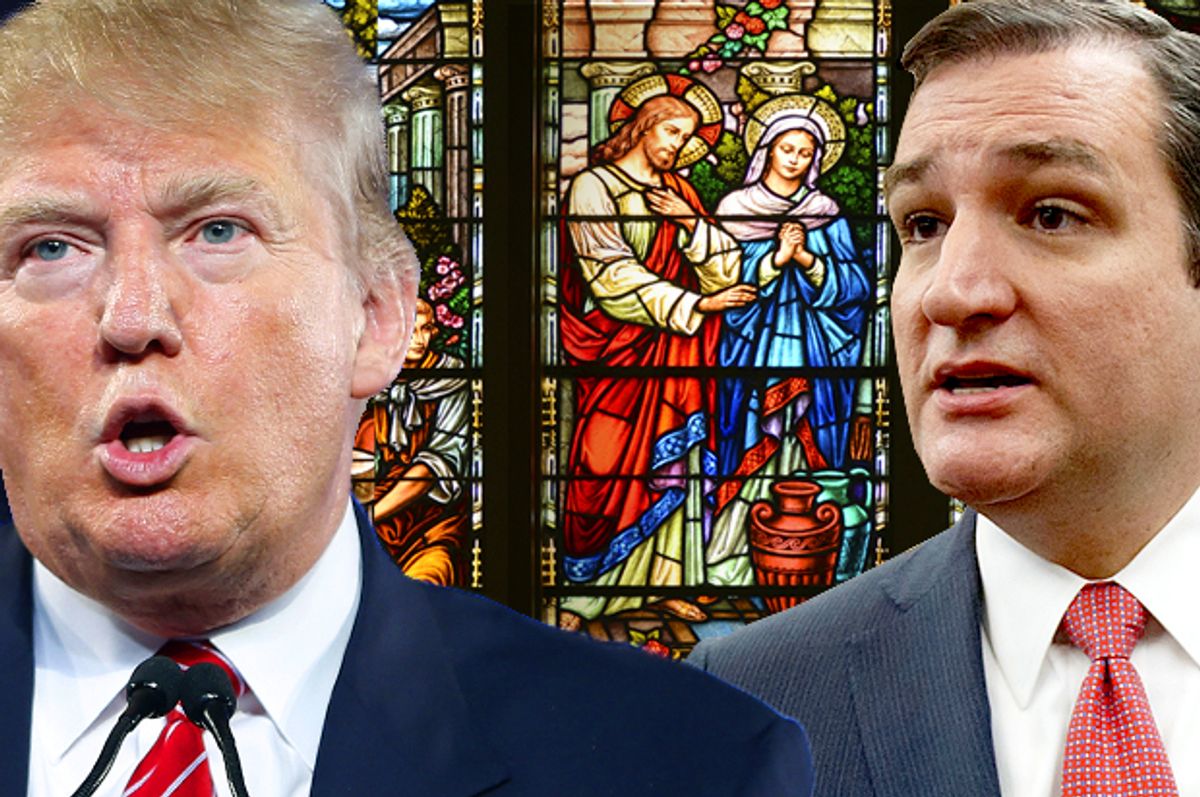 Although someday I'd like to run for my local school board, I doubt I ever will. The single biggest factor holding me back (in my own mind) is the fact that I'm an outspoken atheist. I'm not only “out of the closet”; I've also written quite a lot that can be mined for nuggets to discredit me as a human being. No matter what the Constitution says, there remains a powerful, de facto religious test for public office, and it has bubbled up to the surface this election far worse than usual in the form of breathtaking religious pandering and bigotry. The establishment in both the Republican and Democratic parties, it seems, is hell bent on wringing the last bit of religious exploitation out of an angry, unruly electorate.

The presidential race is overflowing with offensive religious nonsense. Donald Trump is making fumbling overtures to the religious right, and condemning a billion Muslims solely because of their religion. Ted Cruz is playing to the most regressive form of Christianity, all but declaring non-Christians anti-American. Hillary Clinton won’t stop waxing poetic about prayer, and, although an understandable strategy, Bernie Sanders has tied himself into knots to infuse humanism with as much religion as possible. And yet, even the faithful should be offended at the central role religion has taken in this presidential election.

I was motivated to start writing this essay after turning on CNN one morning and being subjected to religious extremist Franklin Graham, who was gravely informing viewers that “only God can save America.” He urged Christians to run for public office, and (coincidentally) for the local school board. He subtly stated that non-Christians are unworthy for public office in this country.

Cable news has a credibility issue even without constantly checking our politics against the wishes of theocrats. This groveling at the feet of the most crooked and wealthy preachers is an ugly American tradition that only highlights our national dysfunction. It is the inverse of the sweet, earnest faith of “It’s a Wonderful Life.”

You might think (as I do) that Graham is nothing more than a grotesque religious crackpot, expressing our most divisive and lowly identity politics, but the actions and words coming from this cycle's presidential campaigns show just how much religious pandering is tainting our politics.

Let's start with Donald Trump, a heathen if ever there were one. He’s played the Muslim card, pitting white Americans against a small, powerless minority; at the same time, he's comically uninformed about the Christian faith he is attempting to manipulate. The only upside is watching Trump look awkward while a bunch of religious nuts pray over him. That one, outlandish moment exposes American Christianity for the postmodern fraud it has become.

Trump's religious bigotry is ugly and unconscionable, but at least he has no actual beliefs to promote, other than self-worship. Ted Cruz, by contrast, is a true theocrat. If the general election came down to Trump versus Cruz, I’d have to campaign for Trump. Cruz is as unhinged as Rick Santorum, except that somehow (beyond reason) he seems to be gaining steam. I know that my tacit acceptance of Trump over Cruz is selfish, because I’m a white guy. Trump treats brown people the same way Ted Cruz would treats atheists. If you’re any kind of minority—religious, racial or gender—this GOP contest has little upside.

Candidates during this election cycle have been desperately trying to out-Jesus one another—on the right and the left. Large minorities of the Democratic Party are atheists, agnostics or no religion in particular. Yet our party can’t be bothered to even try to speak to us. The “me-too” religiosity is stark, ugly and endless.

I was most horrified by a question at the Democratic debate on CNN earlier this month about how the candidates feel about god and prayer. Who is vetting these questions? How can my own party not rise above the standards and practices of the opposition party, an extremist group determined to repeal the first amendment?

I like Clinton well enough and will support her if she is the nominee, but I think she has been offering subtle panders to the religious elements of the electorate. Despite starting out with only reserved references to her faith, it has become more and more central to the Clinton strategy as Sanders (a secular Jew) has gained momentum. There is advantage to be had by exploiting religion and making Sanders look like “the other.” Is it any wonder that religious, southern voters support Clinton in outsized numbers? Using religion to divide us is a strategy that is unworthy of her otherwise solid liberal credentials, and it is also reminiscent of the smears she threw at Barack Obama in the ‘08 cycle.

By now, most people are aware of the Pew Study of Religion in America, which shows how we are a diverse country of all faiths and no faiths. Millennial voters are much less likely to belong to organized religion. Non-affiliated people (often called “nones”) are 22 percent of America. Even if you include only atheists and agnostics, we are seven percent of the electorate, outnumbering Jews, Mormons and Hindus combined, yet we are not worth even a casual pander. Every time a candidate trumps his or her faith or insinuates the supremacy of religion over non-faith, they divide and insult us. To divide a population by religious belief is to perpetuate the hate and suspicion that has burned heretics, caused forced conversions and launched pointless wars.

Despite what Christians might think of “angry atheists,” I have no problem with your faith or anyone’s personal, deeply held beliefs. It’s all just none of my damned business. It becomes my business when it drives public discourse and our election. When Ted Cruz brings up religion on the campaign trail that gives me absolute freedom—and even a duty—to criticize and insult not only Cruz but the faith he uses to justify his heinous politics. If you don’t want your god(s), faith or holy books dragged through the mud, you can’t trumpet them as the ultimate answer to our political problems.

In my lifetime, traditional religious outlooks have waned for a lot of reasons, and America is better for it. Less religious societies are more equal and accepting, but even that is not the point. I’d vote for any Christian (or Buddhist or Muslim) who shares my political leanings. Religion means almost nothing to me. My outrage is reserved for politicians who use faith, superstition and tribalism to divide us, and sadly religious bigotry is a growing feature of our current political conversation.