It's true, Fox has a right-wing news-satire show. They're so proud of it that it runs at 3 a.m. It's got Bee wrong 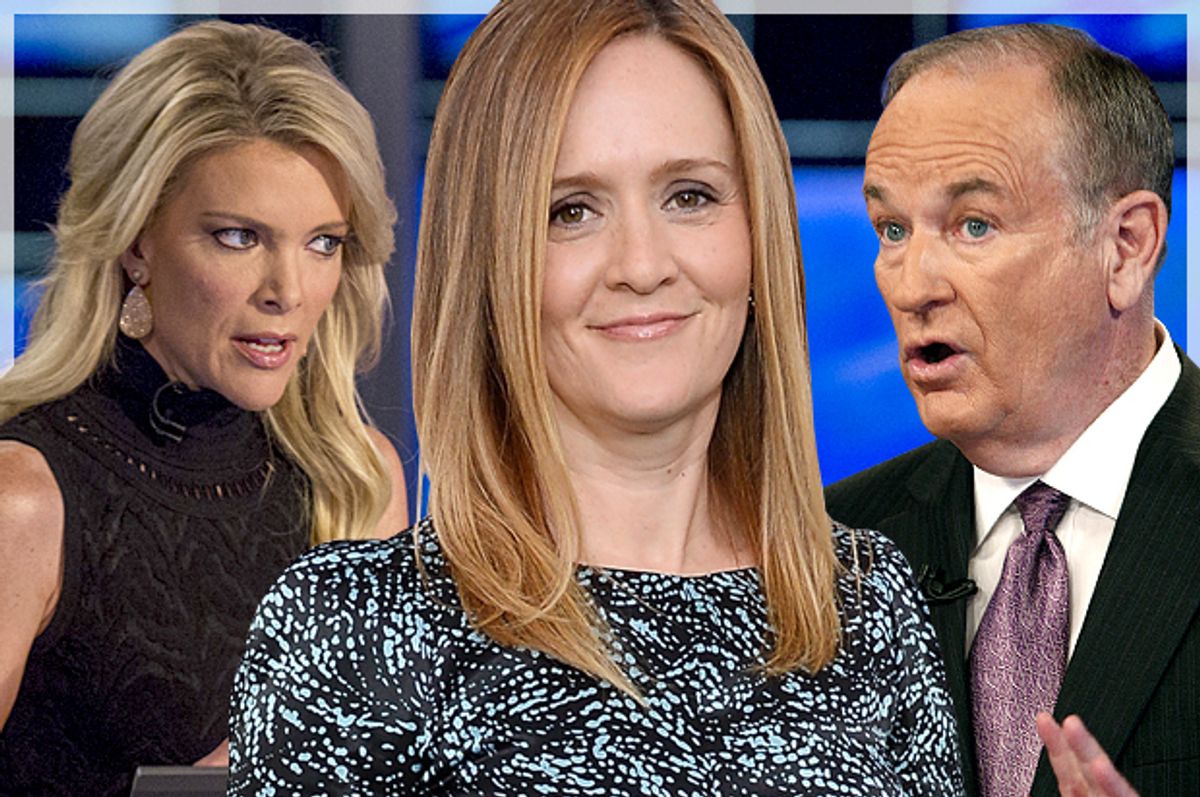 Since the debut of her new TBS show, “Full Frontal,” Samantha Bee has been stirring things up.  From her first episode she hit the ground running, leading many to wonder why she hadn’t been offered Trevor Noah’s seat as host of “The Daily Show.” In only four short weeks, “Full Frontal” has become a go-to site for the sort of sharp, edgy political comedy our nation so desperately needs.

Following the legacy of Jon Stewart, Bee is not just offering us the sort of snarky comedy we need to make sense of ridiculous times, she is also providing a helpful corrective to the news media circus.  Her viewers are not just entertained; they are informed.

So it’s no surprise that her show has already incited the right into a frenzy.  Each week with each new episode her segments draw the ire and condemnation of conservative outlets.  reitbart called one segment from her premiere an “all-out assault against Republicans.” The piece went on to complain that Bee “manipulated a number of clips aimed at making Republican presidential candidates appear reckless and unintelligent.” Newsbusters described her as a witch who was bewitching liberals.

But last week things escalated and she became the target of Fox News’s own “satire” show, “Red Eye” hosted by Tom Shillue.  According to Shillue, Bee took a clip from his show out of context.  The effect for Shillue is nothing less than a “comedy scandal.”

If you thought it was weird to imagine Fox News with a satire show, it is certainly even weirder to imagine that the show is describing itself as comically superior to Bee.

“Red Eye” airs at 3 a.m., a sign that, even though Fox News wanted to enter into the satire news genre, they didn’t try too hard. The first host was Greg Gutfeld (2007-2015) who went on to host “The Greg Gutfeld Show” for Fox News.  Shillue, who has had cameos on Jimmy Fallon and worked with Jim Gaffigan, took over as host last year.

“Red Eye” opens by covering a story and offering a monologue by Shillue that is then followed by a panel discussion.  The bulk of the comedy is frat boy humor that does nothing more than mock dumb news stories, make fun of liberals and the left, and offer the occasional Donald Trump joke as “balance.” The best and more ironic part of the show is offered by Andy Levy, who does a running segment called the “Halftime Report” where he corrects mistakes made by the host and panelists and critiques their positions.

So what is the so-called comedy scandal with “Full Frontal” all about?  Shillue claims that Bee misrepresented a race segment on “Red Eye” with selective editing.  According to Shillue, Bee only aired part of a larger segment, which offered more nuance on the issue than the clip “Full Frontal” aired.

The segment in question aired last week when “Full Frontal” celebrated Black History Month by bringing out staffer Ashley Black to share her ideas about how white people have ruined it. Surprising Bee, Black explained how she hates the whole idea of Black History Month since it just gives white people a chance to criticize contemporary African American activism: “Stop pretending you would’ve marched with Martin Luther King when you don’t like anyone who’s marched since,” Black said. To illustrate the point, “Full Frontal” then showed a clip of “Red Eye” host  Shillue saying “I like Martin Luther King and I don’t like Black Lives Matter.”

This leads Black to claim “That’s why I’m starting Black Now Month: It’s when you stand up for black people who are alive now in real life and not just your imagination of the ’60s.”  The segment was sharp, ironic, and resonated with the reality facing activists today.

But that’s not how Shillue saw it.  He felt that the “Full Frontal” use of the clip took away the nuance and balance to the issue he had offered on his show. And he complained that the clip was out of context.

Then he declared that Bee had committed comedy crime: "They took my show and pretended I was clueless, when I'm not clueless! I know what I'm doing!"

But it seems that Shillue does not, in fact, know what he is doing.  Here is more from his segment:

"Greg, sympathize with me. I think they've broken all sorts of comedy rules here," Shillue asked panelist comedian Greg Johnson. Johnson replied: "Absolutely, Tom. No one knows that more than you do. What would a White Lives Matter rally look like? It'd be like a Phish concert and like a hacky-sack circle. It'd be hosted by the Harvard lacrosse team." Shillue went on, "I would host it. I'd lighten it up. I would. I would lighten up a White Lives Matter rally."

Later one of the panelists, Jedediah Bila, claimed that the problem is that “people love to make fun of Fox News because they like to make an assumption of what our viewpoints are.” She went on, “I don’t know how these people sleep at night, honestly, because you are not producing something that is honorable. I mean you are clearly trying to misrepresent … and that really bothers me.”

I guess Bila doesn’t understand that that is exactly what Fox News does.  Not only does it lie at an alarming 60 percent rate; it has the worst bias of any network.

As this segment shows, there is not much nuance to the show, but more importantly, there isn’t much good comedy either.

Despite the fact that “Red Eye” imagines itself as part of the satire news genre, it’s important to point out that the show may be comedy, but it certainly isn’t satire.  Satire is a specific form of humor that depends on encouraging critical thinking in the audience.  Its goal is not to mock others, but rather to engage the audience to question the status quo.

This is why it is a form of humor rarely found in right-wing culture.  While there are notable conservative satirists, like Dennis Miller, most right-wing comedians focus on making fun of others and rarely engage in sustained political comedy. Satire depends on irony—on saying one thing and meaning another. It is a complex form of humor that is not readily appreciated by the republican brain.

Alison Dagnes interviewed comedians from across the political spectrum and found that one reason we don’t have much conservative political satire is because “Conservatism supports institutions and satire aims to knock these institutions down a peg.”  “Red Eye” might whine that they have been misrepresented by the media-- in this case “Full Frontal” -- but really they are just echoing the mantra that the “liberal” media is biased and unfair to conservatives.

Satirical comedy depends on a high degree ironic reflection that is simply not possible on a show like “Red Eye” that has to serve its right-wing master.

The funny thing is that “Red Eye” commentator, Levy, actually made that exact point when he did his half-time report the night Shillue attacked Bee. After making fun of the fact that Shillue had the same wardrobe in both segments, he went on to say “They were right about you.” All Shillue could do was offer a shamefaced smirk.  Watch the clip here.