Conservatives vs. contraceptives: In both Florida and in the Supreme Court, right wingers hungry to control women's sexuality are targeting birth control 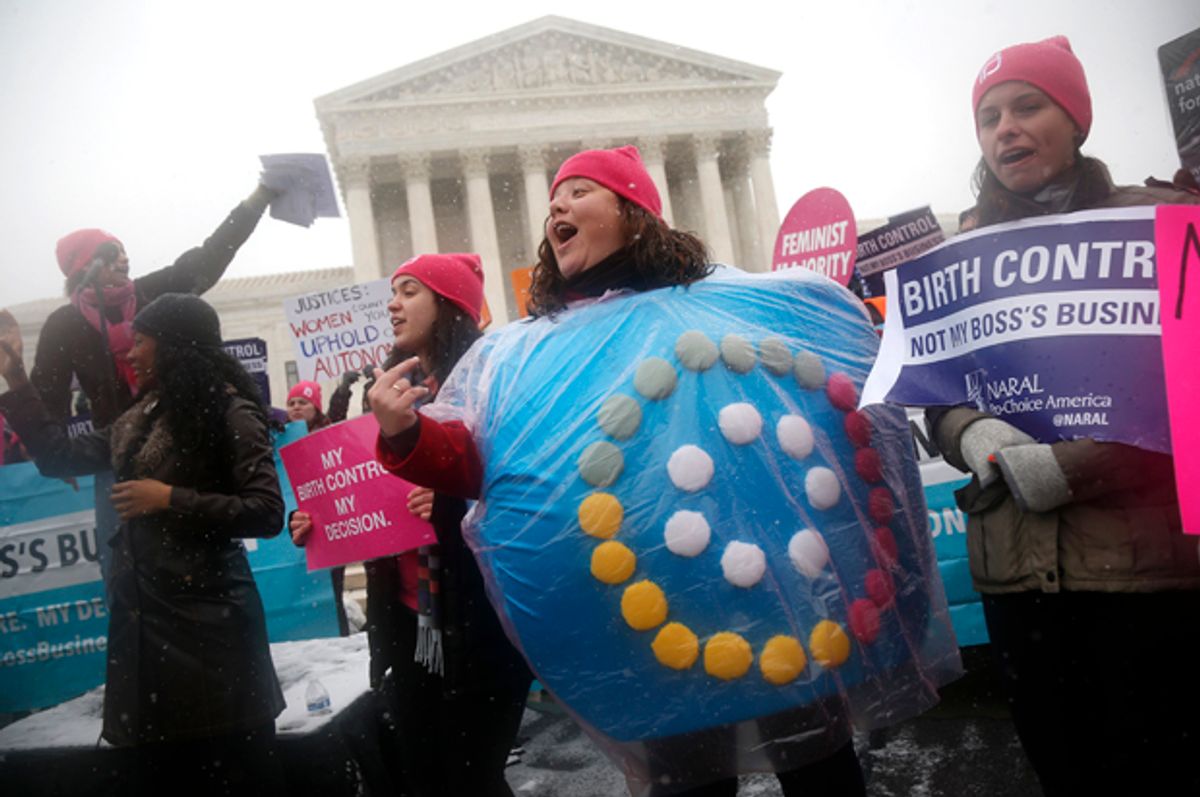 Nothing is surer proof that the "pro-life" movement is more motivated by desire to control female sexuality than to protect embryonic life than the movement's increasingly open hostility to contraception. While anti-choicers will invariably snort and take umbrage at the claim that they hate birth control, there is an undeniable increase in efforts to make it harder for women to access affordable contraception, efforts that are more in line with punishing sex than preventing abortion.

There are two major stories this week that illustrate exactly how the right is attempting to cut women, especially low-income women, off from affordable birth control: By stripping them of insurance coverage for contraception and making it harder to get contraception (or any sexual health care at all) from low-cost public health centers. They make a lot of excuses for this, ranging from "abortion!!!!!!" to "religious liberty", but the consistent theme is making contraception too expensive for many women to access.

Wednesday, the Supreme Court will hear yet another case about whether or not your employer should be able to interfere with an employee's attempt to use birth control. In the last case, Hobby Lobby v Burwell, the anti-contraception wing fought back against The U.S. Department of Health and Human Services requiring that contraception be included in the list of basic services every insurance plan must cover. Conservatives argued that since your employer writes the check to the insurance company, they should be able to prevent your insurance plan from covering contraception to protect their religious liberty.

Never mind that the insurance plan belongs not to the employer but the employee, who earns it, along with a paycheck, for working. Never mind that this is the equivalent of an employer saying that because they sign your paycheck, they should be able to stop you from buying condoms with it. The court went along with Hobby Lobby's argument, figuring that the Obama administration would find some workaround so that employers aren't directly paying for plans that cover insurance, thereby keeping their employer hands clean from paying for that dirty, dirty sex their female employees are having. (No efforts have been made to manipulate benefits packages to punish men for having sex.)

Well, the Obama administration did create a workaround. Since the official excuse anti-contraception forces made was they didn't want to "pay for" the nasty lady-sex, the administration said, OK, you don't have to. Just sign this piece of paper indicating your deep religious convictions about other people's sex lives, and the government and insurance companies will pay directly for the contraception coverage instead. Religious beliefs protected, right?

Well, no. Since this was never actually about religious freedom but about stopping women from getting contraception, a number of employers turned around and sued, arguing that not only should they not have to offer contraception coverage themselves, but they should be able to stop you from going somewhere else to get it.

The claim in Zubik v Burwell, which is being argued Wednesday, is that merely signing a paper refusing to cover employee contraception — and thereby freeing the employee to get it elsewhere — the employer is somehow "participating" in the sin of non-procreative sex. Never mind that religious objectors have always been required to state their objections in order to get exceptions to other laws, such as the draft. Female sexuality is apparently far more wicked than killing people, since signing a piece of paper implies complicity in the former but not the latter.

Zubik v Burwell demonstrates that "religious liberty" is an obnoxiously transparent gambit to keep women from getting contraception. Similarly, the past year's surging right-wing panic over Planned Parenthood's abortion services, which they have offered for decades, is just another fig leaf to cover for the real agenda, which is separating women from their contraception.

This was made clear in Florida this week when the state passed a massive bill defunding Planned Parenthood. Republicans made a lot of noise about abortion, but the funding in question was for non-abortion services like contraception, STI treatment, and other gynecological care.

That's because, in response to concerns that the defunding would deprive thousands of women of health care, the state provided a list of "alternatives" for women, "alternatives" that don't actually offer gynecological care in many cases.

As The Guardian reports, the "alternative" locations for health care offered to women include "dentists, optometrists, and elementary schools".

That's right: If your local Planned Parenthood gets shut down and you need a Pap smear and a birth control prescription, Florida Republicans will literally send you to a dentist instead. With that level of ignorance about female biology, one has to wonder how any of them have managed to father any children.

Florida isn't the first place Republicans have tried this gambit. In both Louisiana and Ohio, conservatives defended defunding Planned Parenthood by suggesting women could go to dentists or even food banks instead. With a pattern like that, the message, however passive-aggressive it may be, is still unmistakeable: Republicans are suggesting that the only legitimate reason a woman might need a gynecologist is for prenatal care. Any other care — Pap smears, STI testing/treatment, and especially contraception — is considered illegitimate.

No matter how much flailing around, screaming "babies!" and "religious liberty!" they do, conservatives are making it quite clear that the real point of contention here is that women are having sex. Low income women who can't afford contraception without public health clinics or insurance coverage are being targeted for a couple of reasons. Lower income women are simply more vulnerable, for one.

But it's also because the attacks on low income women fit neatly into the conservative project of denying low income people the right to feel any pleasure, comfort, or stability whatsoever. Cutting low income women off from contraception, putting them in very real danger of having unwanted childbirth  that makes them even poorer, stems from the same sadistic urge that would force poor people to choose between getting to eat and getting to work. It's a worldview that holds that low income people should live hard lives devoid of any pleasure or ease, where they have to walk miles upon miles to get to work and never enjoy basic human comforts like sex with your partner.