In his new film "The Confirmation," Owen plays the alcoholic carpenter father of Jaeden Lieberher 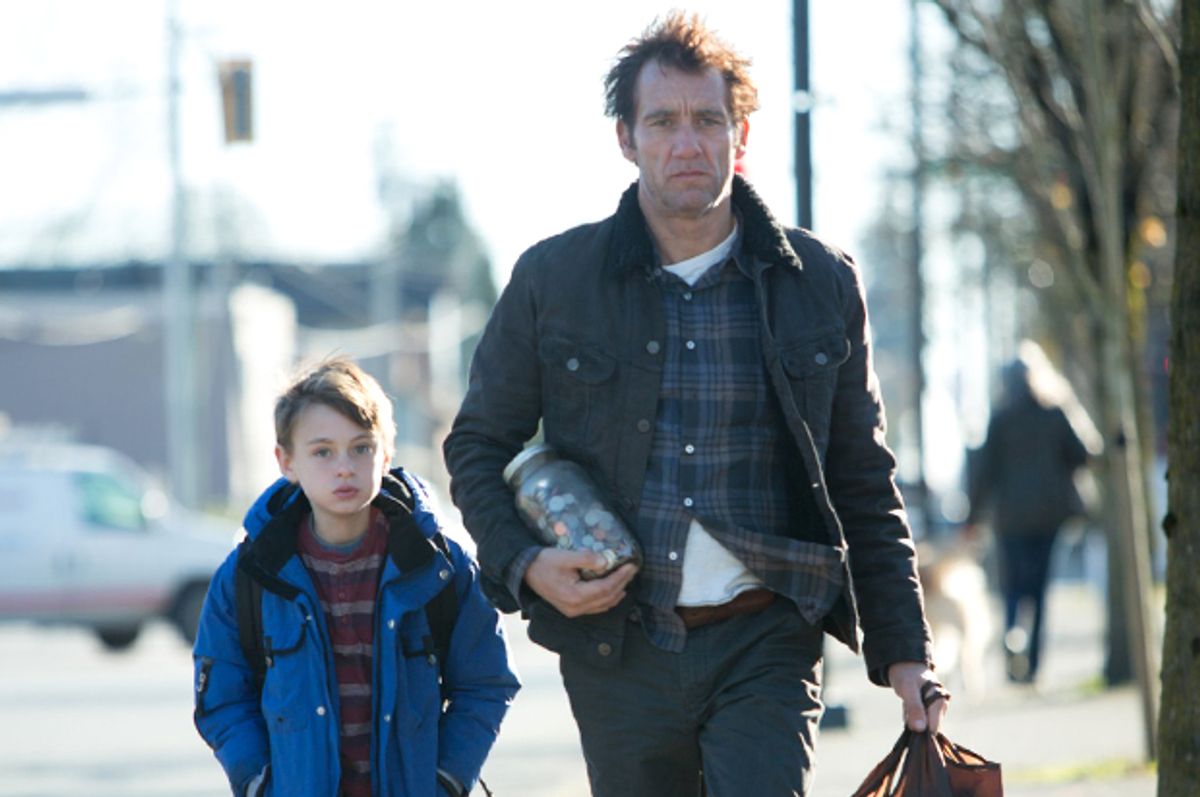 Jaeden Lieberher and Clive Owen in "The Confirmation" (Lionsgate)
--

Clive Owen, whose breakout role was the title character in “Croupier,” plays “Go Fish” with his character's 8-year-old son Anthony (an excellent Jaeden Lieberher) in “The Confirmation.” This new comedy-drama, written and directed by Bob Nelson (who penned “Nebraska”), features Owen as Walt, an alcoholic carpenter who has lost his house, his money, his marriage and his truck when his tool set, a family heirloom, is stolen.

The film shows the craggy-faced actor’s ability to fully inhabit a character; Walt still appreciates the value of hard work, and craftsmanship. His pride may be suffering, but his spirit is strong. Owen excels at giving flinty performances, and playing men who are flawed but trying to be noble. He has enlivened many a modest film, such as “Greenfingers,” where he played a prisoner with a talent for gardening. “The Confirmation” is another comedy-drama in this same vein.

Lieberher, who appeared in “St. Vincent,” more than holds his own as a wise-beyond-his-years kid who never seems cloying or precocious.

The on-screen father and son team spoke with Salon about working together and work ethics, as well as clean living, and parenting.

Clive, Walt talks about the “illusion of perfection” that handymen create. You tend to play characters who try to pass as having it all under control. Can you discuss that aspect of your screen roles?

Owen: Yeah, I am attracted to playing characters in conflict. To play someone flawed is, to me, to play someone believable. We’re all flawed. We grapple with conflict and it’s more interesting for me to do that. The job of acting is to understand what your character is going through, especially when they are not perfect.

Are you handy like Walt—can you fix broken or sticky doors, or are you like Anthony’s stepfather, Kyle (Matthew Modine), who pays people to do it?

Owen: No, I’m not good at that. But it’s a personal story for Bob [Nelson], whose father is a good carpenter, so I leaned on him to make it look like I knew what I was doing.

Jaeden, how did you bond with Clive as an on-screen father?

Lieberher: We spent a lot of time with each other before shooting. We went on bike rides on the weekend. I think the best thing to do when forming that kind of specific relationship is to make it natural. I don’t think it’s right to force it. So we got to know each other. We didn’t do anything specific. It wasn’t important for us to form an estranged and awkward relationship. It’s easier to act when you’re not close, than to act when you are close.

Clive, you’ve played a father before in “The Boys Are Back.” As a parent yourself, how do you approach fatherhood on-screen?

Owen: I think, following on Jaeden’s point, that as a parent there’s an understanding, and a level of communication involved. So when I see a relationship [on-screen], it has to be believable. It’s getting comfortable and learning to trust the other actor. That’s what sells it. That’s what’s key with working with a younger actor—getting them to trust me, so you can go to darker places to get uncomfortable and weird. You need to go to those places. Parenting isn’t safe, it’s challenging.

Jaeden, what lessons do you learn from Clive, or even Bill Murray in “St. Vincent,” that have informed your acting?

Lieberher: Working with so many great actors has definitely helped me become better. When I worked with Clive, he told me to work hard on my acting skills and never stop working. He was always trying to help me develop the characters. He inspired me to become better.

The film has a metaphor about clean living—no drinking, no sinning, fix what is broken; get off your ass and clean up your house/yard. Walt gets into some fights in the film, and teaches Anthony how to box. Are you guys tough guys? Or do you subscribe to a clean living kind of a lifestyle?

Owen: Tough guys? Not really. That theme is very much a Bob thing. Walt is struggling and down on his luck, but he has a moral compass and responsible. He’s getting to know his son better. If things were better, he’d be a good dad, but life can be tough and get in the way sometimes.

Lieberher: I agree. No one’s perfect. And people have different things about them that people can look up to and become better. The character of Walt has some issues, but so does everyone else. They can overcome those problems, like alcohol, by developing better traits.

What can you say about the themes of masculinity and coming of age? Do you think “The Confirmation” is showing Anthony what being a man is?

Lieberher: I think that in the beginning of the film Anthony is smart and kind and has manners, but over the course of the film he learns how to protect himself and the people he loves. He really grows up in that way. By the end, he finds a true father figure he needs.

Owen: I think that the film is a journey for both of them and they meet in the middle. Walt is vulnerable, but as they travel together there’s a real hope for him.

There’s considerable talk about Walt’s pride in his work—the trellis, for example, but also the bookcases and cabinets in the house he used to live in. Why do you think Walt started drinking? How did he lose his self-worth? Where did his demons come from?

Owen: That’s hard to say about anyone who develops that problem. The film is non-judgmental. Walt has issues—but he is still decent. He has pride in his work. People take things for granted and don’t respect that.

Anthony has questions about the importance of religion; Walt says he doesn’t know the answers. What are your views on faith and spirituality?

Is Walt, a Christ-like figure? Jesus was a carpenter…

Owen: I don’t know about that. The theme is a young boy grappling with things, and wondering what to do and how to do it. You make your own decisions in life and you try to make the best decision you can. You have to live with yourself.

Lieberher: I agree. It’s a belief; some people have, and some don’t. It’s up to you to decide what you want to believe in, and you don’t have to figure it out right away. I don’t think Walt or Anthony have figured it out yet. But they will.