Trevor Noah is a lightweight: Laughing at his own jokes while "The Daily Show" flounders

This should be "The Daily Show‘s" year, but Wilmore, Bee and Colbert are all blowing him away 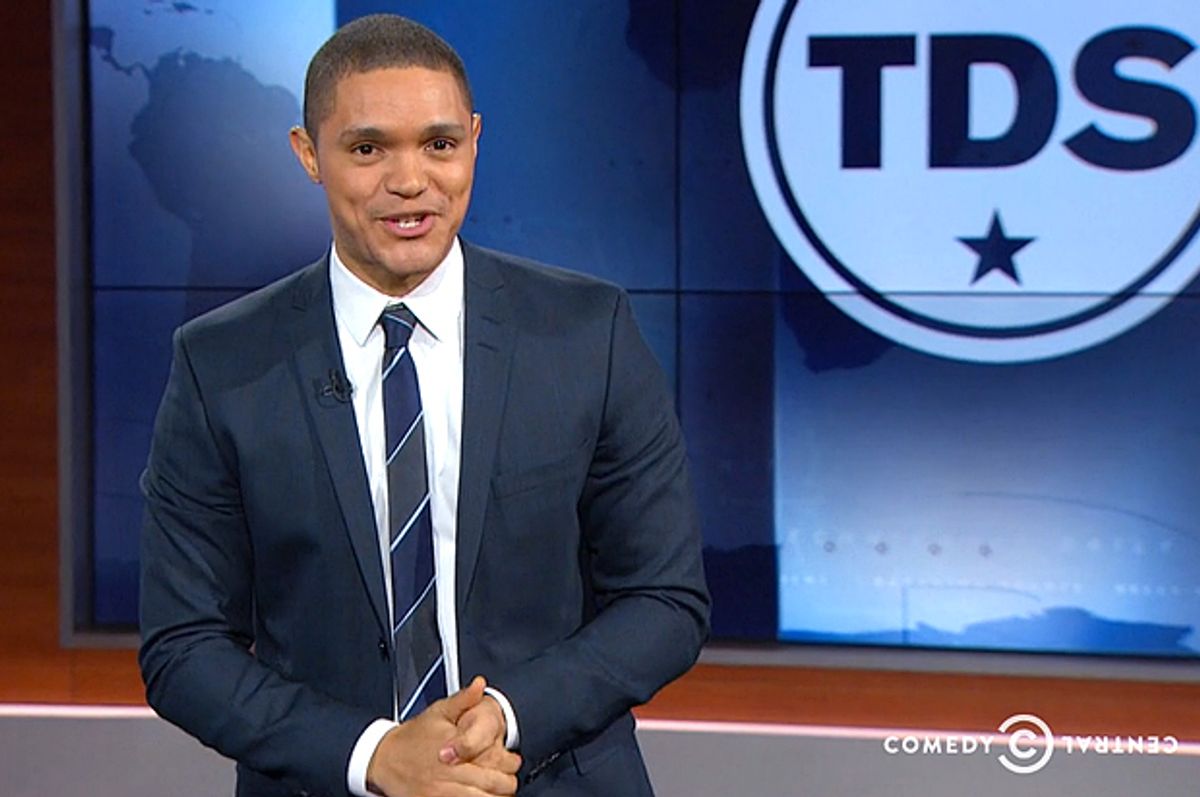 Since Jon Stewart left “The Daily Show,” inheritor Trevor Noah has been both welcomed and criticized. He’s either refreshing or a disappointment, a letdown after Stewart’s edgy reign or just what the show needs to move into the future. Some observers were willing to give Noah some time to settle in: He’s from South Africa, and was bound to take a while to develop a feel for American politics. A new show is scary, and he deserved the chance to get a little seasoning.

Last week’s episodes made something pretty clear: Noah still has some of the best writers in the business. And he’s funny and smart and likable. But despite six months on the job, he’s not growing much.

Noah’s most frustrating quality is that he leans toward being silly – whether pushing a joke too far or laughing at his own lines – in a way that undercuts the seriousness of "The Daily Show’s" main subject, which, at this point, is an election with real consequences. This is, of course, political comedy, and it’s got to balance light with heavy. It can’t be all somber lectures and gloomy analysis. Noah can’t be earnest.

But with "Daily Show" alum John Oliver delivering 20-minute riffs on subjects that should be dull – refugees, tobacco companies -- that somehow manage to keep us laughing and thinking at the same time, the bar is being set pretty high these days. Throw in Larry Wilmore, Stephen Colbert and Samantha Bee consistently offering dryer, sharper and less self-regarding comedy that Noah, and he’s starting to seem like someone who won’t outgrow his lightweight style.

It’s not that he’s bad. But when correspondents Hasan Minhaj, Roy Wood Jr. and Jordan Klepper are often more pointed, by showing how the same writers’ words can be delivered with more restraint, something’s off.

Sometimes, the show’s writers aren’t quite there either. On Thursday, Noah made fun of Supreme Court nominee Merrick Garland’s name, called him “totes adorbs” (yikes), tossed in a joke at the expense of older people, and called Marco Rubio “Little Marco.” Then he poured out three different bottles of water to make the same obvious Rubio joke. It was kind of funny at first, but it didn’t get better each time. (OK, Noah’s bit on John Kasich’s confetti was pretty excellent.)

Often the best part of a Noah episode is the footage of Republicans loopiness, like the endless reel of Donald Trump using the term “amazing,” from Wednesday’s episode, or several days that ran videos of violence and threats at Trump’s rallies. On Thursday’s "Daily Show," it was the odd and meandering speech Mitch McConnell gave about Garland. This stuff was great, but Noah himself had very little to do with it.

Larry Wilmore, by contrast, was wittier on Garland. (Making fun of the man’s name seems to be a requirement right now, and Wilmore did it better.) He managed to have fun with the courts issue – joking that if Congress wasn’t going to do its job, he wouldn’t do his, and checking his cellphone nonchalantly – without getting silly.

For almost a year now, Wilmore has been covering the presidential election as a demonstration of “The Unblackening,” which he began with a report on Ted Cruz’s campaign appearance at Liberty University that has to be seen to be believed.

Wilmore calls Unblackening “The 'de-Negrofying' of the White House.” As he told Mashable:

When you have somebody like a Donald Trump. He made no bones about trying to disprove Barack Obama's Americanism in trying to make him out to be some foreigner that was born in Kenya — I thought that to be very racist. I don't think that was masked at all, and I feel like there has been an element ... of some ugly racial things. Not everyone is like that of course, and I think most people aren't. But there is a streak of that on that side, and it's not good. So that, to me, is part of my comic take. When people say "Let's take our country back," my way of saying that is, "Yes, you want to unblacken the White House."

This frame gives a larger theme to Wilmore’s coverage, putting him in the line of Jon Stewart’s war against bullshit. And Wilmore gets across a moral weight.

Noah’s version of “The Daily Show,” by contrast, seems to roll from joke to joke without adding up to much.

Watch Noah chat with actor Theo James, and you see what he’s best at. He’s friendly, easygoing, well prepared and improvises well. Noah is a stand-up comedian first and foremost, and he has great instincts for bantering. He’s almost as good with Van Jones, mostly because Jones is able to run with the conversation. (This came after the Jones-Jeffrey Lord debate about the KKK, which was itself bleak comedy gold.)

On the same episode, Noah gave an impression of a drowsy Ben Carson: He’s had a lot of practice at this one, and he’s got it down. But Noah can’t resist laughing at how funny he is. Will he keep that up as long as he’s behind the "Daily Show" desk? On Tuesday, similarly, he made a joke about an overzealous Italian waiter, and it started strong. “Conservatives love blaming Hillary for Benghazi; they push Benghazi like an Italian waiter pushes parmesan. ‘That’s enough. That’s enough. I’m good. Yeah, that’s enough -- thank you. No, no, I’m fine. I said when. I said when a long time ago.’ “ So did we, but Noah keeps going. On and on and on. The studio audience loved it, but on television, it was excessive. It all adds up to a guy who's a bit carried away with his own talent.

No one is great at everything, and part of me wants to just watch Noah for his strengths. His working sense of comedy, admittedly, is probably a bit different from that of the other late-nights hosts. As he told Time Out:

I always believe that funny is serious and serious is funny. You don’t really need a distinction between them. If I’m doing something on stage and it evokes an emotion, then I might show that emotion, but I also don’t believe in being a preacher. If you have a point, that’s a bonus. But the funny has to come first, otherwise you shouldn’t call yourself a comedian.

It sounds good when he spells it out that way. But Noah will put on a better show, one that plays to his own strengths and that grows from the tradition Jon Stewart established, if he takes this a little more seriously. Politics is important business -- especially this election! -- and if Wilmore, Colbert, Oliver and Bee can get the balance right, so can Noah.