Brussels and American narcissism: Europe faces a huge test -- it's one we already failed

Of course our response to the latest tragedy was panic, hysteria and Trumpism. But this really isn't about us 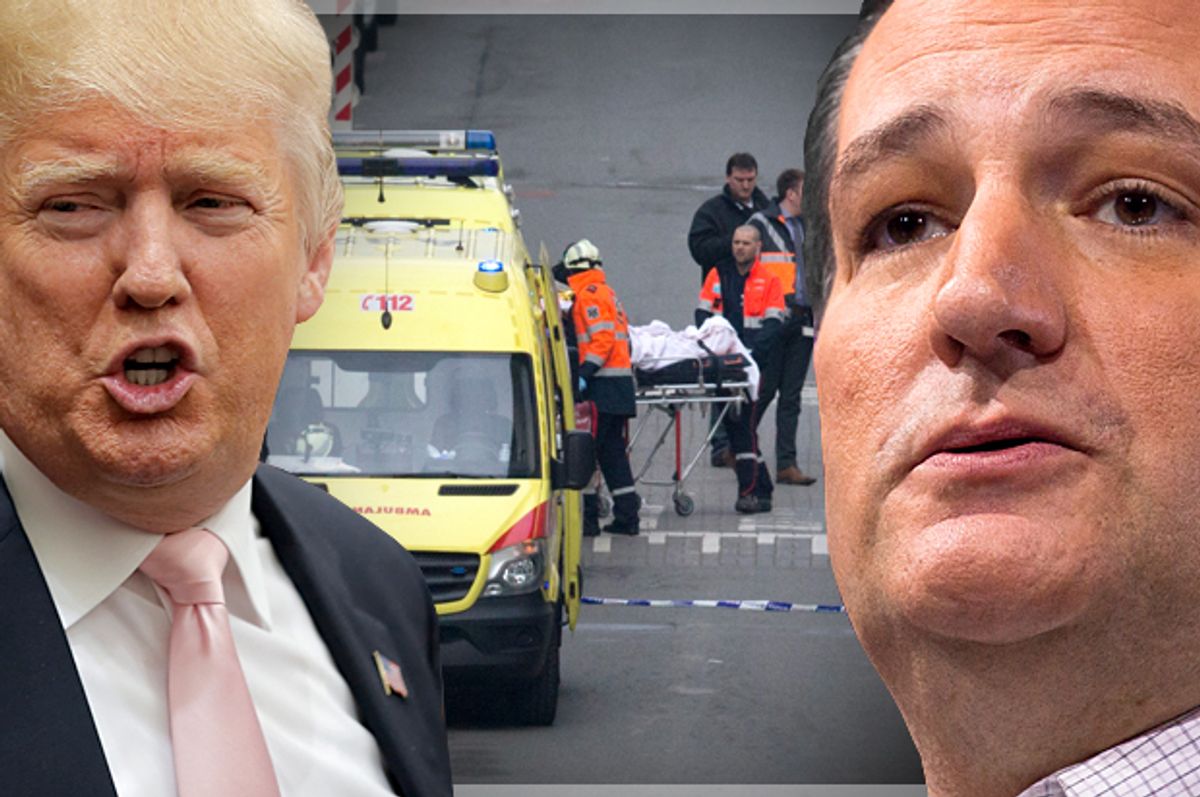 I went to an afternoon screening of “Batman v Superman: Dawn of Justice” on Tuesday, and walked out into a world that resembled Zack Snyder’s overwrought DC Comics universe much too strongly. Anderson Cooper was on TV talking soberly about terrorism, just as he does in the film; the Times Square subway station was ringed by cops in body armor, carrying automatic weapons; an outdoor press conference was being prepared outside a police station, looking exactly like the ones hosted by beefy actors with deliberately bad haircuts in every superhero movie.

I’ll review “Batman v Superman” on Wednesday; what I can tell you now is that it features a suicide bombing in a prominent American location, images of devastation in Belgium and a panicky, hysterical and narcissistic reaction to the threat of terrorism. I’m not suggesting that Snyder or the film’s writers have uncanny abilities and foresaw Tuesday’s attacks in Brussels. Those fears and realities are now permanent features of the cultural landscape. (Well, except for the Belgian part, which in the film is a reference to World War I.)

There are any number of reasons why the American fear of terrorism, and our exaggerated reactions to it, are worse than the actual mayhem inflicted by murderous zealots in Brussels and Paris and Mali and San Bernardino and elsewhere. Among other things, it serves notice of how well such attacks are working: The central point of terrorism, after all, is to spread terror. Bloodshed in Western cities is no doubt desirable, from the ISIS point of view, but it’s more or less a byproduct.

Another big reason, one we witnessed yet again in the immediate aftermath of Tuesday’s bombing attacks at the Brussels airport and a central rail station, is that these events expose our profound ignorance of history and our near-total inability to understand context. People around the world tend to describe America as a childish or juvenile nation not out of snobbery or bigotry (although those currents exist) but because it fits. We are the exceptional nation or the “indispensable nation,” to use the formulation currently favored by the Washington policy elite; we are the center of the world and the pole star of liberty, and everything that happens is about us.

Someone on Fox News apparently suggested on Wednesday morning that since Brussels is considered the capital city of the European Union, by analogy this could be considered a proxy attack on Washington. It’s no surprise that Fox commentators would make wild, jingoistic claims unsupported by evidence; my point is that the same narcissistic self-absorption, and the same free-associative disregard for facts or ordinary logic or well-understood history, are widespread in our country.

When I was covering the New Hampshire campaign and heard Donald Trump tell audiences that ISIS was the most brutal and barbaric phenomenon since the Middle Ages, I had the same sitcom double-take reaction as every other reasonably informed person: How does he get away with saying this shit? At the risk of tumbling into the cliché about Trump’s “poorly educated” followers, the Trumpian demographic neither knows nor cares whether the outrageous claims he makes are true, and could not successfully identify any century in the Middle Ages with 20 guesses. He has channeled their unfocused rage and resentment with a series of belligerent fantasies — the Mexican border wall, paid for by Mexico; the ban on all Muslims — that bear roughly the same relationship to actual politics or history as the superhero throwdown in Snyder’s film. (Indeed, “Batman v Superman” probably offers a more sober, adult perspective on the nature of power than the Trump campaign, which is aimed more at an infantile consciousness than a juvenile one.)

Desperate to outflank Trump in his last-ditch campaign to become the standard-bearer for a Republican establishment that hates his guts, Ted Cruz has suggested that we must “empower law enforcement to patrol and secure Muslim neighborhoods before they become radicalized.” Given that law enforcement agencies are specifically empowered to interrupt criminal conspiracies, and have many tools available to accomplish that goal, it’s not quite clear what the junior senator from Texas thinks he means. To paraphrase something the late Molly Ivins said in a different context, I suspect his remarks made more sense when they involved the word “Kristallnacht.”

But my fellow Americans, here’s the thing: Yes, we are once again failing the civil-liberties test, on grounds of paranoia and stupidity. But the Brussels attack, like the two Paris attacks last year, was not about us, or was about us only incidentally and indirectly. Yes, we were the nation who responded to the 9/11 attacks by deciding to bankrupt ourselves financially and morally with an unending worldwide war against a shadowy enemy who can never be defeated, and in that sense everything that has happened since has been driven by our disastrous policies and our inability to learn anything from their failures.

No matter how badly we want Brussels to be an attack on our freedoms and our greatness and our glorious and noble campaign against Eastasia (or is it Eurasia?), it just wasn’t. It was the latest in a coordinated series of attacks on European social democracy at its weakest points, its points of maximum contradiction. Between the Syrian refugee crisis, a stagnant economy, the recent wave of terrorist attacks and resulting political discord, many Americans no doubt believe that Europe is in total chaos.

That represents an immense failure of the American media, which is just as narcissistic as the public. Such a picture is largely untrue: In most of Western Europe, social democratic institutions have continued to function, despite abundant flaws. European citizens enjoy better healthcare than Americans and an enormously more equitable and affordable educational system. They eat better, work less and spend much more time with their friends and families, but are nearly as productive and have a similar standard of living. Europeans live longer, and have far fewer stress-related illnesses like obesity, diabetes and heart disease. Even when you factor in terrorism and historically low crime rates in America, violent crime in most of Europe is 50 to 80 percent lower.

None of that is to deny the significant fractures and stress points in European society, which are exactly what ISIS wants to attack. As European elites have moved ever closer to the Anglo-American model of finance capital and neoliberal economics, Europe has become increasingly fragmented and the continent’s prosperity has become more uneven than ever before. Although economic inequality remains mild by American standards, Europe’s large communities of Middle Eastern and African immigrants have become trapped in impoverished urban enclaves like Molenbeek, the now-infamous Brussels district where last fall’s Paris attacks were planned and where accused Paris ringleader Salah Abdeslam was recently arrested, an event that may have sparked Tuesday’s attacks.

Europe now faces an enormous test, and an enormous choice. Can the continent’s political leaders, and its people, respond to the threat posed by domestic Islamic terrorism without surrendering the vision of multicultural, multinational, secular social democracy that the European Union at least theoretically represents? (Or used to.) Some version of combat and conflict with the so-called Islamic State is unavoidable, but the ideological and political conflict within Europe is likely to decide the future of the planet more than whatever military misadventures an anti-ISIS alliance embarks upon in the Middle East. Can Europe resist the allure of tyranny, and begin to undo the toxic policies of economic injustice, corporate criminality and social division that have done so much to create this problem and worsen it?

Of course those questions are important to Americans too, and Americans will ultimately play a role in forging the answers. But pending unimaginable large changes to American society, our domestic answers are known. ISIS doesn’t need to bother fomenting panic, hysteria and tyranny on our shores; that task is done. We took the big test already, and we failed.