Concerns about American democracy tend to center on Trump, but here's a reminder why Cruz may be just as terrible 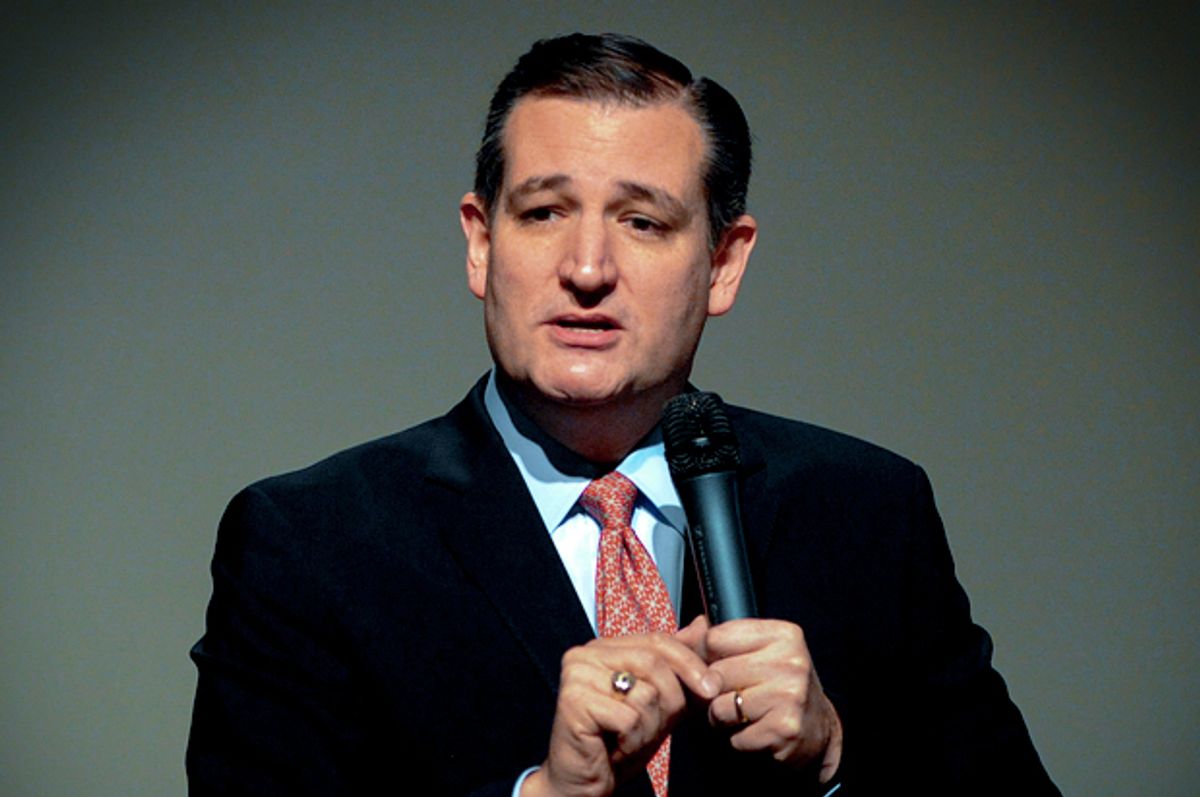 No more than a few hours after news of the terrorist attack on Brussels reached the United States, Donald Trump was on Fox News and the “Today" show, crowing about the many ways in which the brutal murder of dozens of innocent people ultimately represented his vindication.

“I will tell you, I've been talking about this a long time,” Trump told the intellectual heavyweights that host “Fox & Friends,” where he is always welcome. “And look at Brussels,” he added. “Brussels was … a beautiful place with zero crime. And now it's a disaster city.” His recommended next step? Ban Muslim refugees (now more than ever); and some waterboarding, he said, “would be fine,” too.

Just one more example of how Donald Trump degrades American politics and ignores once sacrosanct norms of liberal democracy, right? More gutter politics, more fueling his campaign with bigotry and fear. Trump being Trump; a reminder of why his combination of shamelessness and megalomania is such a grave threat to modern liberal democracy. A reminder of why, in his special way, he is unique.

Oh, would that it were so simple. The truth, however, is that it is not. Because while the world would be a slightly nicer place if Trump was the only one to worry about, the unpleasant reality is that he’s not alone when it comes to undermining the foundations of a pluralist, open society. He’s the best in the business today, no question. But as he reminded us this morning with his response to Brussels, Trump’s closest competitor, Sen. Ted Cruz, can come mighty close.

This is a point I’ve made before, but I suppose any argument worth its salt bears repeating: If this were any other election (by which I mean, an election not involving Donald Trump) then Cruz would be the one whose ascendancy would have the political class fretting. Indeed, except for Cruz’s distaste for unvarnished gangsterism, there’s not much that separates the two. And Cruz’s reaction to Brussels shows what I mean.

If you can’t quite read the statement (tiny text and whatnot), here is the most relevant section, which comes after the usual fulminations over the president’s refusal to use the phrase “radical Islam” as a rhetorical cudgel, via Mother Jones:

We will do what we can to help [Europeans] fight this scourge, and redouble our efforts to make sure it does not happen here. We need to immediately halt the flow of refugees from countries with a significant al Qaida or ISIS presence. We need to empower law enforcement to patrol and secure Muslim neighborhoods before they become radicalized.

We need to secure the southern border to prevent terrorist infiltration. And we need to execute a coherent campaign to utterly destroy ISIS. The days of the United States voluntarily surrendering to the enemy to show how progressive and enlightened we are are at an end. Our country is at stake.

This kind of McCarthyite language has become the norm within the GOP’s presidential  primary so quickly that you could be forgiven missing it, but did you notice how Cruz’s statement actually ups the demagogic ante? This is the line that does it: “We need to empower law enforcement to patrol and secure Muslim neighborhoods before they become radicalized.”

Yes, Cruz is now calling for law enforcement to treat “Muslim neighborhoods” as if they were guilty until proven innocent; as if they could “become radicalized” at any moment, like walking time-bombs; as if they were the enemy within. You could find plenty of evidence that this is the norm already, of course. But as bad as such hypocrisy unquestionably is, Cruz’s suggestion that we abandon any pretense of Muslims having civil liberties or legal equality is even worse.

More damning still, the statement follows an extended defense by Cruz of the odious Frank Gaffney, an Islamophobic crank who not only dabbles in outlandish conspiracy theories but who has also referred to Barack Obama as “America’s first Muslim president.” Why was Cruz defending Gaffney? Not because he didn’t want to attack a fellow Republican, but because Cruz had named Gaffney as an advisor to his campaign. This, in other words, was a battle he wanted.

So, to recap, Cruz is running a campaign that not only features a promise to “carpet-bomb” Syria and Iraq (which, almost by definition, would entail killing scores of innocents) but also lists a notorious anti-Muslim bigot as one of its guiding lights. What’s more, the campaign not only recommends that Muslim America be treated as a de facto fifth column, but also suggests that “America’s first Muslim president,” as Gaffney once put it, has been “voluntarily surrendering to the enemy.”

Now, Ted Cruz is not Donald Trump, it's true. But if that’s not extreme, demagogic, and irresponsible behavior of the kind that threatens liberal democracy itself, then I don’t know what is.